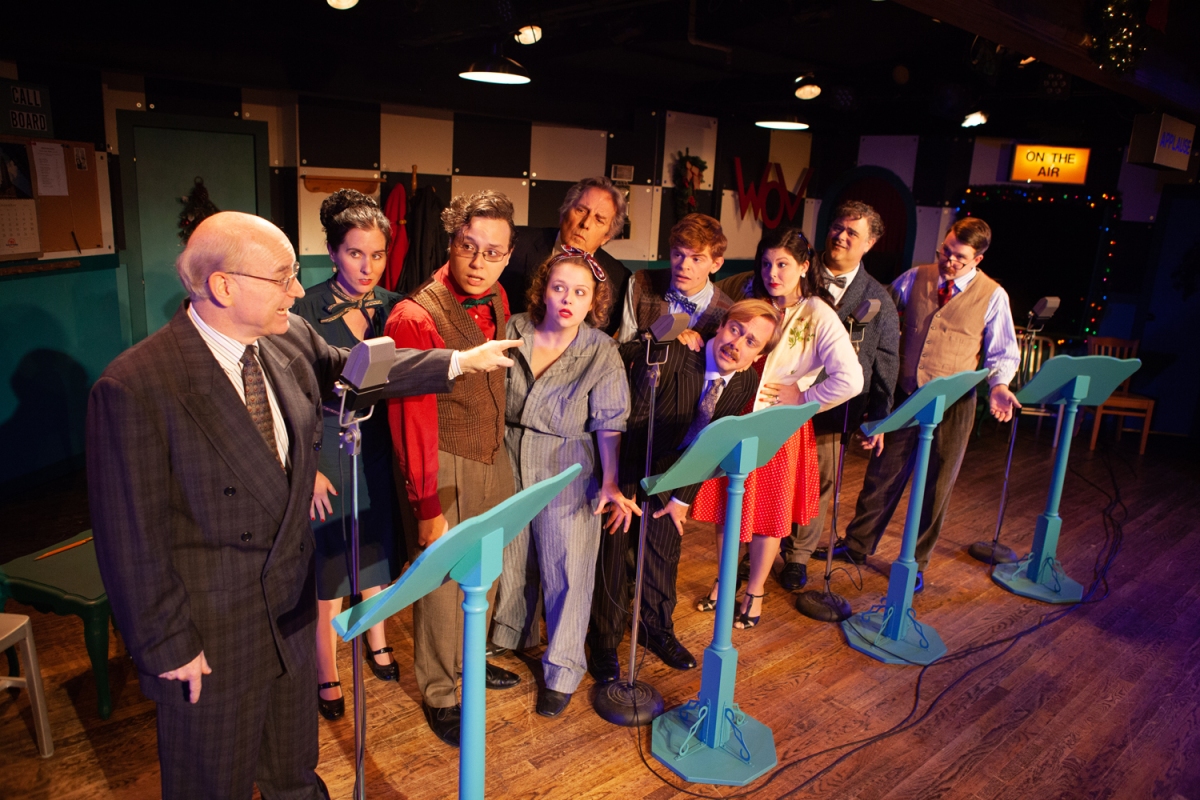 If you like both holiday traditions as well as comedy, then A 1940s Radio Christmas Carol is the holiday show for you. Author Walton Jones, composer David Wohl, and lyricist Faye Greenberg have taken the traditional Dickens tale and set it to music in a shabby radio station in Newark, NJ in the early 1940s. The audience has a role too – as the live studio audience that interacts with the cast who pass out souvenir programs and instruct us in how to respond to the APPLAUSE and LAUGH signs.

The fictional radio station WOV broadcasts from the Hotel Aberdeen. The live show is subject to interruptions from loud plumbing, a rowdy crowd of Shriners who are celebrating their annual Christmas parade with an after-party in the same hotel, and frequent phone calls from the mother of the youngest member of the cast. In addition, there is a special guest, a seasoned movie actor and Broadway veteran, William St. Claire (Bill Blair) who has been brought in to play the role of Scrooge. In addition to his increasingly worrisome quirks – such as bringing a huge trunk full of costumes for a radio broadcast and ignoring cues – St. Claire has some personal issues that lead to an on-air breakdown forcing the rest of the cast to improvise an ending. An odd assortment of characters from detectives to seductresses are tossed into the mix resulting in comedic mayhem.

Lucky for them and for us, the ensemble – both the scripted one and the one that was cast on the Swift Creek stage – is more than capable of handling this unexpected development. This is truly an ensemble piece that is no stronger than its weakest link – and there was no weak link. PJ Llewellyn as Fritz Canigliaro took every opportunity to draw attention to his shoes; apparently Fritz had been a Florsheim salesman in the recent past. Kenneth Putnam was endearingly annoying as Charles “Cholly” Butts, a baker with an intense love for his own product. John Mincks was convincing as the teen-aged Jackie Sparks, whose mother kept calling to check on him; he also has an adorable crush on Sally. Tara Callahan Carroll had the role of the company comedienne, Margie O’Brien, and Elisabeth Ashby played Judith Davenport, a serious actress who caught the attention of all the men, while declaring that she already had two kids and two exes and didn’t want more of either. Mike White held down the role of the struggling company’s director, Clifton Feddington.

Director Tom Width, who also designed the set, has also shared his love of the radio play and the studios in which they were performed. He has filled the stage with all sorts of mysterious and enticing objects that are used to create the many special effects that were necessary to create the magic of radio. There are bells and blocks, locks and boards, a sheet of aluminum, mallets and sticks, and gadgets and gizmos, and even a carafe of celery stalks (one of my favorites). These items are controlled by Isadore “Buzz” Crenshaw, the “sound effectician” who unexpectedly announces that he has recently enlisted, with the capable assistance of Sally Simpson, a young woman who spends her days working for an aviation company. These two roles are in the capable hands of Gordon Graham and Claire M. Gates. This is the 1940s, and the War play an important and ever-present role.

There were lots of 1940s references, such as cigarette commercials, statements from doctors recommending certain brands of cigarettes, and many references to the war. The show’s sponsors included brands such as BVD underwear, Ovaltine drink mix, and Lucky Strike cigarettes. (Nostalgia break: I still remember when cigarettes were advertised on the radio and television. Even little kids knew that LSMFT stood for the slogan “Lucks Strike means fine tobacco.” The last cigarette commercial aired in 1970, but prior to that time, I can remember going to the corner store to pick up a pack of cigarettes for my grandmother.) The script also incorporates a lot of double entendre and snappy word play, including lines such as “All the boys at school loved my little Fannie, too.” Fannie, of course was the name of the speaker’s little sister.

The 1940s radio show device makes this stand out from all other Christmas shows. The laughs come easily and frequently. The cast was well-chosen, and the direction is well-paced, although the second act did seem to drag just a little bit. The music is lively and occurs in short bursts. Unlike musicals where people suddenly break into song for no apparent reason, the songs are naturally woven into the radio show format.  Musical direction is by Shellie Johnson; lighting by Joe Doran; technical direction by Jason “Blue” Herbert;  and costumes by Maura Lynch Cravey.

While suitable for all ages, I think A 1940s Radio Christmas Carol will hold a special appeal to those old enough to still remember when cigarettes were advertised on television. But for many, the best part is getting to see how all those special effects were created.

One thought on “A 1940s RADIO CHRISTMAS CAROL: Tradition With a Delightful Twist”