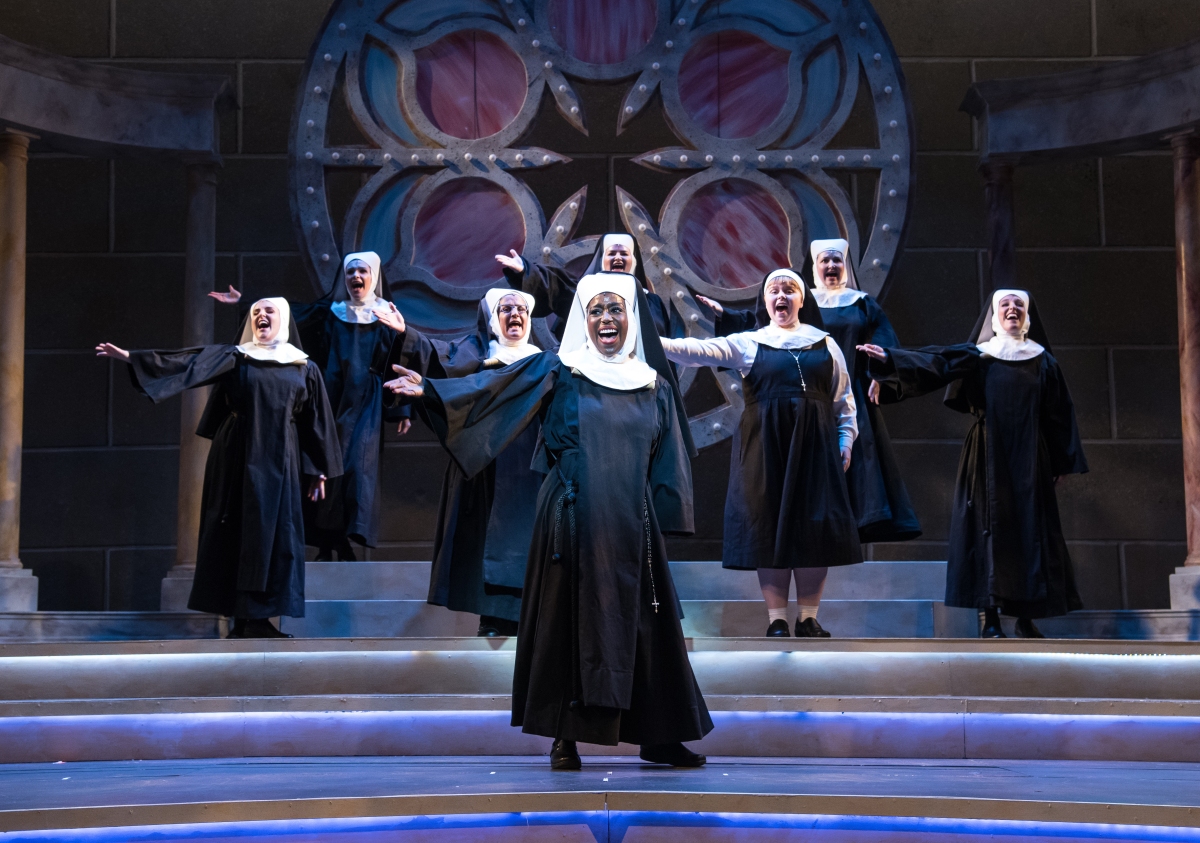 SISTER ACT: Take Us to Heaven

Sister Act is a familiar, feel good musical that does all the right things. On opening night there were moments when the audience spontaneously clapped along, and many jumped to their feet for a rousing standing ovation as the company belted out their final song, “Spread the Love Around.” I had nearly as much fun watching other audience members enjoying the musical as I had watching the musical itself.

Felicia Curry, the petite powerhouse from Dreamgirls (2016) and The Color Purple (2014) has returned to Richmond inhabit the role of Deloris Van Cartier, the singer on the run from her mobster boyfriend who goes into witness protection in a convent. Curry commands the stage with high voltage energy and a voice that seems too big to be contained by her physical body.

Curry shares the spotlight with Andrea Rivette as Mother Superior. Interestingly, Rivette’s role often requires her to use her clear and strong voice to sing through lines, rather than say her lines or sing actual songs. Both Curry and Rivette bring strength of character and a willingness to change or at least to compromise which imbues these near-caricatures into more full-fleshed characters. These two – the showgirl and the Mother Superior – both embody growth, strength, and sisterhood from vastly different perspectives, and in doing so demonstrate a level of tolerance that many of us could benefit from in today’s world.

One of Deloris’ tasks, as the newly appointed director of the choir, is to bring the shy Sister Mary Robert out of her shell, and Gwynne Wood fills this role to perfection. Her round-faced innocence makes Wood’s second act solo, “The Life I Never Led,” even more stunning. When she sheds her mousy demeanor and allows her voice to soar and holds that final note, there is no turning back.

Other supporting characters that added color, flavor, and humor included Durron Marquis Tyre as Eddie, the police officer who helps Deloris; and two of my favorite nuns – the exuberantly optimistic Sister Mary Patrick (Kelsey Cordrey) and the cranky Sister Mary Lazarus (Susan Sanford) under whose leadership the choir couldn’t carry a tune if it had been placed in a bucket for them. And we cannot forget Michael Hawke as Monsignor O’Hara, the priest whose calling seems to have been sidetracked by the need for fiscal restraint in the face of a dying congregation and the threat of the church being sold to a pair of antiques entrepreneurs. As the church’s bottom line goes up, and the church’s books move from red to black, the Monsignor’s priestly garments become increasingly flamboyant.

While women were the stars of this show as well as the show-within-the-show, the men of the cast also turned in some notable performances. Sincée J. Daniels played the role of the notorious Curtis whose big number is the darkly humorous “When I Find My Baby” and its subsequent reprise. Daniels’ afro wig, slick suits, and thuggish demeanor, however, relied almost entirely on parody. He reminded me of Eddie Murphy in one of his less savory character roles. Sister Act offer no redemption for Curtis or his trio of bumbling sidekicks: nephew TJ (the versatile Anthony Cosby); Joey (the consistently and confidently funny Paul S. Major); and Pablo (the hilarious Mark Parello, Jr.) who always speaks Spanish even though no one else around him speaks or understands the language. The trio plots to break into the convent, seduce the nuns and abduct Deloris via the song “Lady in the Long Black Dress.” Their old school seduction lines (you know, the old name and zodiac sign line) and accompanying dance movements make this one of my favorite numbers of the show.  Major dropping to the floor in his sexy pose and Cosby doing a body role are indelibly etched on my retinas. Their actual execution of the ill-fated raid on the convent is a hilariously well-timed bit of choreographed movement.

On opening night, something weird was going on with the lights. A light in the lobby seemed to be going on and off, and the dimmer on the house lights kept going up and down at odd intervals prior to the show. But once the show started, there didn’t seem to be any electrical problem, although I did find the lights that illuminated the upper arches of the set distracting, as they seemed to be moving or waving at times. Otherwise, I was quite impressed by some of designer BJ Wilkinson’s work, especially the heavenly light that spread over the choir of nuns in Act 2.

Sarah Grady designed the costumes, and there were some wonderful moments involving costumes and choreography. If you want to be surprised, do not read the rest of this paragraph, just skip down to the start of the next paragraph. But, given that some of these changes happen so suddenly, you might want to know what to watch out for. Officer Eddie delighted with a double tear-away costume: he appeared in a police uniform, worn over a white Saturday Night Live vest and slacks ensemble, which was in turn worn over another police uniform. The choir had several changes of habit, adding increasingly glittery scapulars or aprons to their basic black dresses as their vocal talents increased, ending in full-glitter habits. And of course, there are the increasingly ornate cape-like chasubles worn by the monsignor.

Ron Keller’s set included soaring arches and cathedral windows. I did not have any preconceived ideas of how the set should look but I was surprisingly disappointed; I found it functional but minimal. And the three holes in the floor – for the orchestra and a surprise “cameo” appearance near the end of Act 2 – made the choreography and the wild chase scene just a bit more challenging and breathless than they needed to be.

Set in Philadelphia in 1977, Sister Act is filled with 1970s icons and references and local signatures from Philly cheesesteaks and “Rapper’s Delight” to R&B, Pop, and Disco complete with a spinning disco ball. As with other highly popular musicals which have also been movies (e.g.  The Color Purple, Dreamgirls, West Side Story), I suspect Sister Act will bring people to the theater who don’t normally come to many of the local theater productions. At intermission, I overheard one man say, “What a wonderfully fantastic show.” My companion liked the 1970s musical genres, the Philadelphia-specific references, and “a story I could follow.”

Sister Act, based on the 1992 film starring Whoopie Goldberg, is written by Cheri Steinkellner and Bill Steinkellner, with music by Alan Menken and lyrics by Glenn Slater and additional book material by Douglas Carter Beane. Robin Arthur, who directed last year’s Beauty and the Beast, directed and choreographed – keeping things moving at a lively pace.  The Virginia Rep website admonishes that Sister Act has adult themes and language, but I didn’t find it particularly strong and not at all offensive. The show runs about 2 ½ hours, with one intermission, but it moves along at such a good clip that you’re not even aware of the passage of time.

One thought on “SISTER ACT: The Singing Nuns Are Back!”