The citizens of the tiny town of Doublewide, Texas, population 10, are back and so is the fun. A Doublewide, Texas Christmas, written by the trio of Jessie Jones, Nicholas Hope, and Jamie Wooten, is written, directed, and played strictly for laughs. There is no hidden agenda, no deep message, just plain old stupid fun, filled with Texas stereotypes, exaggerated hair and costumes, and a set that looks like a cross section of a dilapidated doublewide trailer park home.

Picking up where Doublewide, Texas left off last June, the town, under the leadership of Mayor Joveeta Crumpler is eagerly awaiting their incorporation papers from the country board, but there are complications. The county is making one more attempt to annex Doublewide, and then there are the added twists of revenge and reunion.

Three actors have returned in their same roles: Crystal Oakley as the beleaguered and frumpy Joveeta, Jeanie Goodyear as Joveeta’s barfly mother, Caprice Crumpler, and Wally Jones as the once crotchety Haywood Sloggett.

Other roles were recast, with Laura McFarland-Bukalski as the hilariously droll Big Ethel Satterwhite and Lisa Way Piper as Georgia Dean Rudd, manager of the local Bronco Betty’s Buffeteria. Lorin Hope Turner now plays the millennial flower child Lark Barken, and Hunter Mass, who simultaneously serves as Assistant Stage Manager is Norwayne “Baby” Crumpler. New characters include Rebekah Spence as Haywood’s vengeful sister Patsy Sloggett Price and Michael Edward McClain as the long lost Harley Dobbs, who is Haywood’s estranged son and Lark’s unknown father. If this all sounds like a soap opera, I am sure that was the intention.

Highlights include Big Ethel’s scenes with the residents of the Stairway to Heaven Retirement Village at the beginning of each act, and Caprice’s overly inflated pretensions of celebrity as the spokesperson for the local funeral home. This time there is only one commercial recording scene, and Caprice is called upon to use her celebrity to entice new residents to move to Doublewide within the week – a condition of approving the town’s incorporation papers.  Big Ethel must lecture the retirees on their extra-curricular activities, having found yet another pair of boxer briefs and a peek-a-boo nightie hooked in the bushes on the retirement village grounds.

“Baby” was not required to wear a dress or heels this time, but he did don a pink frilly apron while preparing a sweet potato casserole and the town entered a Battle of the Mangers competition with the patriotic theme of “Nativity at the Alamo.” Plot twists and turns involve Patsy’s narcissistic need to get revenge on a competitor from her former town, which she was forced to leave in disgrace, a family of belligerent raccoons, a celebrity yam, a budding attraction between Caprice and Haywood, and a Christmas wish that Lark’s father, who is also Haywood’s son and Georgia Dean’s long lost true love, might be found and enticed to return home for the holidays.

It was interesting to see the evolution of Haywood from crotchety old man to loving family member, but I think there was more comedic value in the role of villain. Patsy partially filled this much-needed role, and Spence embraced ownership of this role; she even threw in an evil laugh or two for good measure.

Crystal Oakley had to be mic’d on opening night as she was just getting over a case of laryngitis. Her character, Joveeta, was plagued by back pain, so Oakley, a real trooper, was beleaguered on two fronts. Other cast members were also hit with illnesses and accidents, requiring last minute and behind the scenes adjustments. Considering all that CAT Theatre has had to go through this year, starting with the uncertainty of whether they would, in fact, be able to have a season due to the looming possibility of losing their long-time home, it is nothing less than amazing that opening night went as smoothly as it did and this cast and crew, including Mike Fletcher who directed both Doublewides on the CAT stage, deserve an extra round of applause for pulling this off without any obvious signs, other than Oakley’s microphone.

Mike Fletcher’s pacing kept the laughs coming, although I found the actor’s blocking was sometimes awkward, making me aware that they were directed to face the audience. Scott Bergman’s set included dilapidated, mismatched furniture in a cut-away of a doublewide trailer with the standard wood panel walls, insulation showing, a Santa on the roof, and a plethora a blinking Christmas lights framing the entire set. Sheila Russ’s costumes ranged from Joveeta’s frumpy sweaters and slacks to Caprice’s holiday print leggings and wildly curled wig. It’s Texas, so almost everyone wore cowboy boots. And since it was Christmas, Buddy Bishop and Mike Fletcher’s sound design included songs from the traditional to the silly, such as “White Trash Christmas.” People who enjoyed Doublewide, Texas or Always a Bridesmaid, by these same authors, or those who enjoy the 1970s style sitcom genre, will feel right at home with A Doublewide, Texas Christmas, as will anyone who just wants an excuse to laugh steadily over a two hour period. 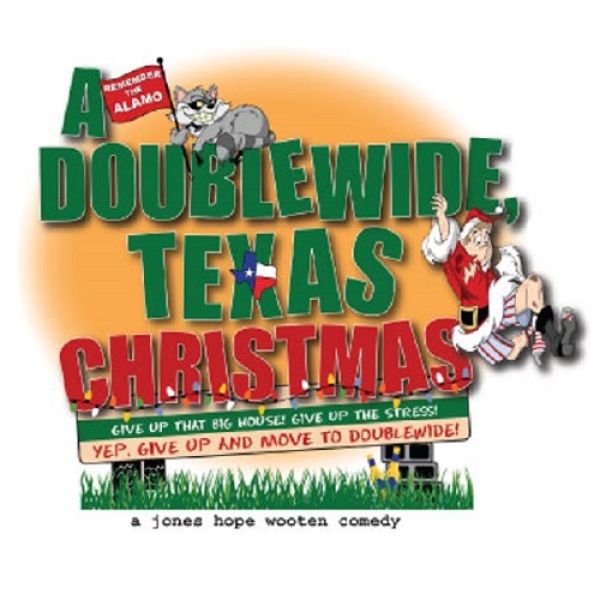 One thought on “A DOUBLEWIDE, TEXAS CHRISTMAS: A Trailer Park Carol”