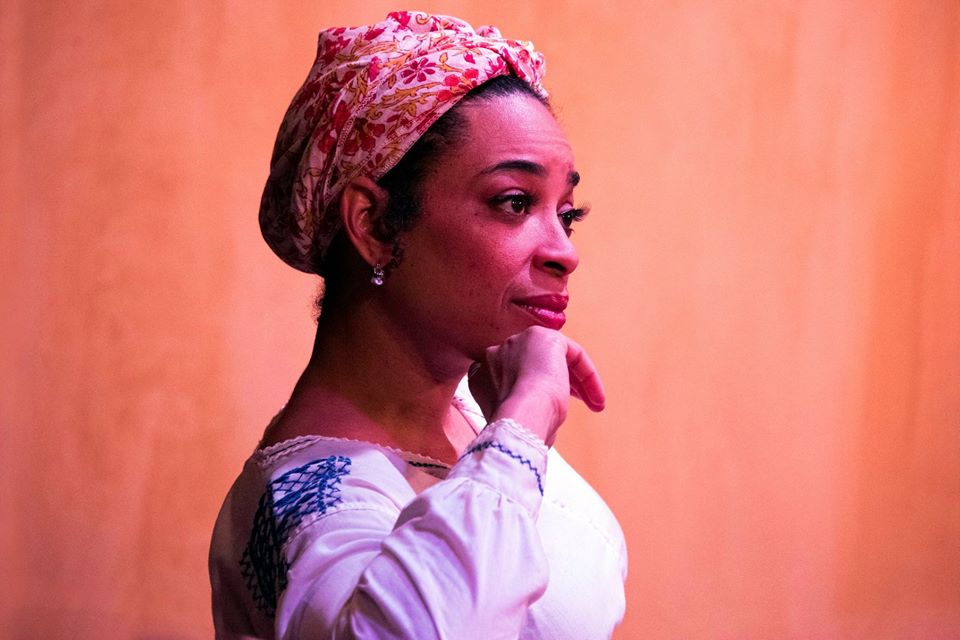 THE REVOLUTIONISTS: The Revolution Will Not Be Televised (Gil Scott-Heron)

Lauren Gunderson’s The Revolutionists, first produced in 2015, may be the only comedy that begins and ends with an execution. The Revolutionists is a play about a woman writing a play during the French Revolution. It is hysterically funny, and it is real. Three of the four characters are historical (not hysterical) figures:

Olympe de Gouges (1748-1793) was a French playwright and political activist. She was executed by guillotine for seditious behavior and attempting to reinstate the monarchy – based on the “evidence” found in the contents of an unfinished play about former Queen of France Marie Antoinette.

Women have the right to mount the scaffold;

they should likewise have the right to mount the rostrum.

Charlotte Corday (1768-1793) was a political activist who was executed by guillotine for the assassination of Jacobin leader Jean-Paul Marat, a leader of the Reign of Terror. She stabbed him in his bath.

Marie Antoinette (1755-1793) was the last Queen of France before the French Revolution. She was convicted of treason and executed by guillotine.

No one understands my ills, nor the terror that fills my breast,

who does not know the heart of a mother.

You can’t be a hero if you’re too scared to show up!

For two hours (including one ten-minute intermission), these four women gather in Olympe’s Parisian office to talk philosophy and plan how to change the world. The Revolutionists is a smart, fast-paced, bold tragi-comedy. It is a play that embraces a love of words and language, and Chelsea Burke’s thoughtfully irreverent and well-timed direction dares the audience to come along for the ride and keep up. Dasia Gregg’s understated set (some framed wall sections, a tiny desk and a few seats that are removed after the first act) has the audience seated in the four corners of the intimate space. Some audience members were sitting just a foot or two away from the performers when they sat on a chair on chaise lounge.

It wasn’t until the end of this riotous yet serious discourse that we realized we were not ordinary participants, but extras cast in the role of audience members. It was something like going along for a ride in your friend’s new car, only to find out later that the car was stolen, and you were the designated getaway driver for the crime they planned to commit.

The Revolutionists boasts a dynamic cast with Maggie Roop as Olympe de Gouges, full of fiery talk but coming up short when it’s time to take real action. Lydia Hynes portrays Charlotte Corday with youthful energy and commitment – and she’s loud (and that’s not a criticism, but a comment from her mentors, Olympe and Marianne). Maggie Bavolack is very pink and fluffy (especially her hair and bosom) and is hysterically funny as Marie Antoinette. But she also expresses an unexpected warmth and compassion that develops as she spends time with Marianne and Olympe.

And then there’s Katrinah Carol Lewis as the free-black freedom fighter Marianne. Marianne is the character we learn the most about, from her family to her political and womanist philosophies and Lewis takes full ownership of this character and the show, from the moment she strides into Olympe’s office, assesses the situation, and applies her sense of righteous indignation tempered with wisdom beyond her years.

In fact, all the woman exhibit knowledge beyond their years – or at least beyond their time period – as their dialogue and declarations are interspersed with contemporary language and well-seasoned with swear words.

The production team includes period costumes by Ruth Hedberg (some attractive, some serviceable, some versatile, and some for fun), sound design by Kelsey Cordrey (filled with crowd sounds, heavy breathing, ticking clocks, gunshots and other ambient sounds), and dramatic lighting by Michael Jarrett that goes black to tastefully yet ominously indicate that the guillotine has dropped.

The Revolutionists, a part of the Acts of Faith Festival, runs through March 21. To paraphrase Marianne, “You can’t be a participant if you’re too scared to show up.” Don’t be that person. 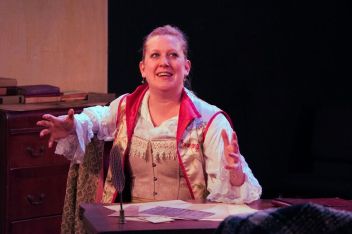 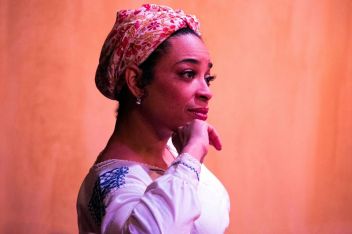 Add Julinda’s books to your collection:

RICHMOND DANCE FESTIVAL 2018: Week Two, in Which Imagined Deities Shift the Permeating Presence of the Fantastic Plums of Paw Creek

Oh my – I was completely blown away by Week Two of Richmond Dance Festival 2018. Eight works: five live dance performances and three dance films and each and every one of them was engaging and compelling. Normally, I would not talk in detail about each work on a lengthy program, but each of these dances and films is deserving of its own mention.

The program opened with Permeating Presence, a quartet by Maryland-based LucidBeings Dance choreographed by Franki Graham and Jeanna Riscigno. The movement comes from the inside out, and is affected by gravitational pull, variable balances, and other outside forces. The words that come to mind in describing this dance are organic and organism. There is a fascinating juxtaposition of nature and science fiction, which provided a natural segue into British filmmaker Barney Cokeliss’ short film, Night Dancing. This mysterious and intriguing dance film has a narrative involving a man who is haunted by the bitter sweet memory of a dancer, a lost love who may or may not be real.

Adventure of Fantastic Plum, choreographed and performed by Ching-I Ching Bigelow and Marsell Chavarria of Nina Simone’ – an embryonic “dance practice project” that embraces improvisation and “people/environment watching.” The pair initially caught our attention with their elaborate preparation; they created a stage-covering pathway of crinkly tarp that wound around the edges of the floor, ending in the center with a colorful pile of clothes or fabric. Bigelow and Chavarria travelled this path, sometimes struggling, sometimes helping one another. Along the way, they danced a bit of salsa and some West African dance steps, and at one point simultaneously balanced on one leg with the other suspended in an impossible position for an insane amount of time. Their journey ended n the center with a rather violent tussle, ending in a sea of calmness. The original score included narrative about “patterns of love in people of the diaspora” and the “loss of home place.” It reminded me of earlier ancestor-conscious works by LaWanda Raines, Kevin LaMarr Jones/Claves Unidos, and Annielille Gavino-Kollman/Malayaworks and seemed to share DNA with the work of Alicia Diaz, seen in the second half of this program.

The first half of the program closed with Francesco Belligerante’s short film, Sifting, filmed in China at several beautifully diverse locations, including a mountain museum and a dam. Beginning with the dancers running through stone or cement corridors, up ramps and up long flights of stairs, the scene suddenly changes to mountains and water, and the dancers slow down, arms wide, heads back, reminding us to take the time to connect with nature and enjoy the moment.

The second half of the program began with Richmond-based choreographer Alicia Diaz/Agua Dulce Dance Theatre’s Portrait of an Imagined Deity. The dancers and Diaz painted a large mandala on the floor with colored sand – a combination of male and female symbols, the peace symbol, and perhaps other images as well. Shoulders back, hips forward, buttocks up, the trio of dancers, all dressed in white, performed a series of vaguely tribal, universally familiar rituals to percussive music, ending with the sound of crashing waves. The deity may have been imagined, but the humanity was real.

North Carolina-based Eric Mullis initially reminded me of a dance minister I had met and worked with at a conference in Dallas, so it should have come as no surprise when his solo, Paw Creek, turned out to be a powerful display of sometimes fractured movement performed to an original score featuring an audio sampling of a charismatic Pentecostal minister.

Curing Albrecht, the third and final film, turned out to be an amusing turn by the English National Ballet. In this beautifully produced short, filmed in the Victoria Baths, a man checks himself into an institution, seeking a cure for his dancing addiction. [See the video here: https://youtu.be/pQYP96phKKE]

Finally, there was /Shift/, choreographed by Jeanne Mam-Luft and Susan Honer  of Mamluft&Co. Dance (in collaboration with the original performers, Rubio and Hannah Williamson). Tense and confrontational, dancers tentatively approach one another from opposite sides of the stage with extended, open hands – only to turn away, to jump as if singed by a hot wire, or to poke at one another with curiosity. At the end, as in life, nothing is resolved, and we are left with the hollow resounding words: “You are not machines; you are not cattle; you are men!”

I am not saying this program was perfect, just that I have nothing to complain about. This program will be performed again on Saturday night, May 5. On Saturday afternoon, the RDF Next Generation youth dancers will perform. The third and final weekend, May 11-12, will feature an all new program of choreographic works by RVA Dance Collective, Turning Key Dance, RADAR, Luisa Innisfree Martinez, KARAR Dance Company, and Megan Ross. There will also be films by Lulo Rivero (flamenco), Nick Zoulek, and Dylan Wilbur.