ROSENCRANTZ AND GUILDENSTERN ARE DEAD: “Actors Are the Opposite of People”

The night before attending Rosencrantz and Guildenstern Are Dead a well-meaning acquaintance winkingly advised me to be prepared to spend three hours in the theater. A visiting family member from out of town warily declined to accompany me. Quill artistic director James Ricks has wanted to present Rosencrantz and Guildenstern Are Dead since he was in high school. He, like many others, are intrigued by the word play and the Calvinist philosophy and theology with its perspective on human mortality.

From hearing the comments of others, it would seem to be a play one either loves or hates. But my own experience was somewhere in the middle. I enjoyed the wordplay, I appreciated the humor – both the slapstick, physical kind and the deeper, more thoughtful kind, but I also, like my aforementioned acquaintance, felt that perhaps some sort of warning or preparation – not spoilers but at least a nod to the nature of this work – needs to be given to potential attendees who are not familiar with the play.

Two minor characters from Shakespeare’s Hamlet interact in a setting redolent of Samuel Beckett’s Waiting for Godot. The puns and jokes and wordplay are a non-stop delight, and that along with the delightful interaction between Tyler Stevens (Rosencrantz) and Adam Turck (Guildenstern) makes the three hours (with two short intermissions) pass more quickly than one might expect. But make no mistake; it’s all about the words and the ideas. Jane Raine’s simple set consists of a thrust stage, three beams (two vertical, one horizontal), three steps across the upstage area, a few wooden boxes and barrels in the third act, and some hanging lights. When Rosencrantz wants to give Guildenstern his full attention, he plops down on the floor/ground.

Visually, Anna Bialkowski offers some period and some fanciful costumes, but director James Ricks has kept the attention on playwright Tom Stoppard’s words and uses movement as kinetic accents to deliver the message.

The play begins with a long, and eventually monotonous (or mesmerizing, depending on your personal perspective) coin toss game in which the coins land heads up more than 90 times in a row. Stoppard makes liberal use of Shakespeare, inserting vaguely familiar lines like, “When the wind is southerly I know a hawk from a handsaw.” This just makes the listener feel all the more at sea when the characters say things like, “The toenails, on the other hand, never grow at all,” or when Rosencrantz screams “Fire” and then derides the audience because no one reacted, “they’d all burn to death in their shoes!”

“There’s so much to do just in the text itself,” Turck, a self-described existentialist, remarked at the Sunday afternoon talkback, during which he described his character, Guildenstern, as “an agent of chaos.” Stevens  evaluated Rosencrantz as being a little easier, less daunting. Director Ricks summarized the work as a young man’s irreverence leading to a new life form, but Joe Pabst, the lead Player of the Tragedians, interjected a bit of pragmatism into the discussion noting that much of what has led to dissertations being written and dissected on this play was “just Stoppard being a dick.”

Like all Acts of Faith productions, Rosencrantz and Guildenstern are Dead has at least one or two talkbacks scheduled. I think this is one in which a talkback is very helpful, since the play itself is not self-explanatory, nor was it meant to be.

In addition to Stevens, Turck, and Pabst, the cast includes Liam Storm as Alfred, a much-put upon Tragedian, Joel White as a moody Hamlet, Mia Richards as Ophelia (a victim of domestic abuse, but that’s a whole other story), Travis Williams as Claudius, Donna Marie Miller as Gertrude, and Bill Blair as Polonius. Cedar Curran, Joel Kimling, and Josh Mullins complete the cast as unnamed members of the touring band of Tragedians.

Calvinism: a branch of Protestantism established by John Calvin, it develops the doctrines of Luther, and emphasizes justification by faith, predestination, and the Grace of God

Existentialism: a philosophical theory that emphasizes the importance of the individual as a free and responsible, thinking, feeling human being capable of making choices

Theatre of the Absurd: dramatic works by European and American writers in the 1950s and 1960s that share elements of existential philosophy, such as human hopelessness; often include lots of word play and little or nothing happens to change the lives of the characters

Photo Credits: Production photos were not available at the time of publication. 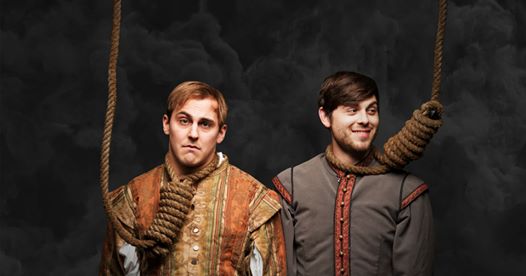 One thought on “ROSENCRANTZ AND GUILDENSTERN ARE DEAD: A Play That Balances the Philosophical and the Mundane”