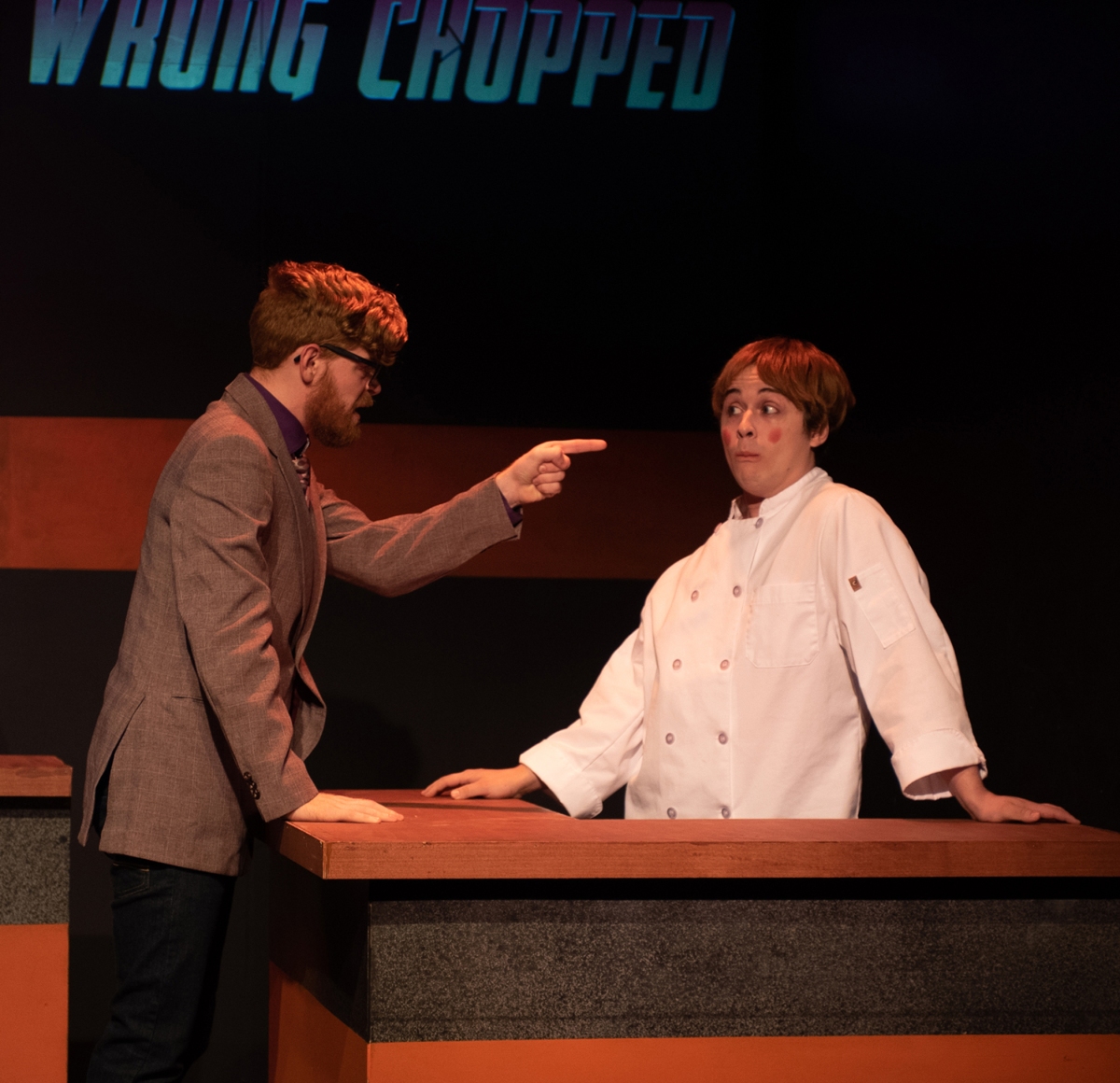 The world premiere of Wrong Chopped at the Firehouse Theatre is a new iteration of Levi Meerovich and Dixon Cashwell’s absurdist theater piece that was first workshopped at the Firehouse last fall. Lest you think I’m being critical, “fun and dumb” are words that co-writer Meerovich used to describe the work. Other words used by the production team include the phrase “stupid comedy,” a sort of disclaimer that the participant viewer should not expect “high intellectual property.”

Although it may appear to be improvised, the organized chaos on the stage is quite intentional. The entire play – and I use that word loosely – is scripted, down to the grunts and stutters. But what is it about? As the title suggests, Wrong Chopped is a parody of Food Network cooking shows. Four chefs compete for a $10,000 prize. They must create an appetizer, an entrée, and a dessert using the mystery items in a basket. The food items range from bones to eggs, but there are other items as well, things like a part of a sentence and a framed photo of actor Stanley Tucci who apparently has something of a cult following among this crowd.

The chefs are Jenny Brackish (Tyler Stevens), Bolton Kane (Chandler Matkins), Darude “Blaze” O’Ronald (Cheslea Matkins), and Goo Henry (Dante Piro). Brackish seems to be a stay at home mom, Kane is a New Age philosopher, Blaze is a street chef who operates a food truck, and Henry is, well, I’m not quite sure, but Henry apparently has a long-standing feud with the show’s host, Ted Allen, played with manic intensity by John Mincks.

The judges include a woman (Tara Malaka as Daniel Craig) who insists she is an actor who plays James Bond and “a rhyming holy woman,” who goes by the name Cardinal Bigsauce (Abbey Kincheloe). I never caught the occupation of the third judge, Marlas Jones (played by Doug Blackburn).

There’s also a camera person, Payton Slaughter, who captures odd angles of the actors and at one point gets usurped by Chef Kane who brings the camera into the audience and takes video selfies with audience members. And then there was Levi Meerovich, a co-writer who was also The Watcher. One of my favorite parts of the show was the opening scene or prologue when Meerovich, looking very handsome with a fresh haircut and a formal tuxedo jacket, approached the keyboard placed in a corner in front of the stage from where he accompanied the actors, occasionally made comments, and directed the projection of videos of old television shows and other, assorted images. When he first came out, Meerovich took off his jacket. And his shoes. And his vest. Then he put on his shoes and pulled his jacket on over his white dress shirt and red boxer briefs, and that’s how he very comfortably completed the show.

You may notice that in the first paragraph I used the phrase participant viewer – well, that’s because the audience isn’t merely observing. The cast sometimes invades the audience space, making the audience participants in the action. And then there are those, like the row of young people directly behind me, who laughed so loudly and so often that they virtually became part of the show.

There is really no point in giving a plot summary – there isn’t any. This is a messy play – physically and metaphorically. There is lots of rice and popcorn and catsup. There are references to James Bond, Hamlet, and numerous movies and television shows, as well as many more references I probably didn’t get because I’m of a different generation. But in answer to a friend’s question, did this show make me feel old? – not at all. It did not make me feel old, but it probably does have greater appear to people who are in their 20s and 30s. People in this age group laughed the longest and loudest. One woman closer to my generation said she laughed but sometimes didn’t know what she was laughing at. And do you know what? I think that Meerovich and Cashwell would find that perfectly acceptable.

Wrong Chopped may be classified as theater of the absurd. It’s also been referred to as avant garde and dada. By whatever label, it is non-traditional theater, and offers a viable alternative for those who want something different, funny, and irreverent. I would not place myself among that group. If you like a linear plot, a play with a clear beginning, middle, and ending, and a conclusion that neatly ties up everything – this isn’t it. If you’re looking for something totally different than what you usually find on Richmond theater stages, and you don’t even know what the term “comfort zone” means, then you might be the target audience for Wrong Chopped.