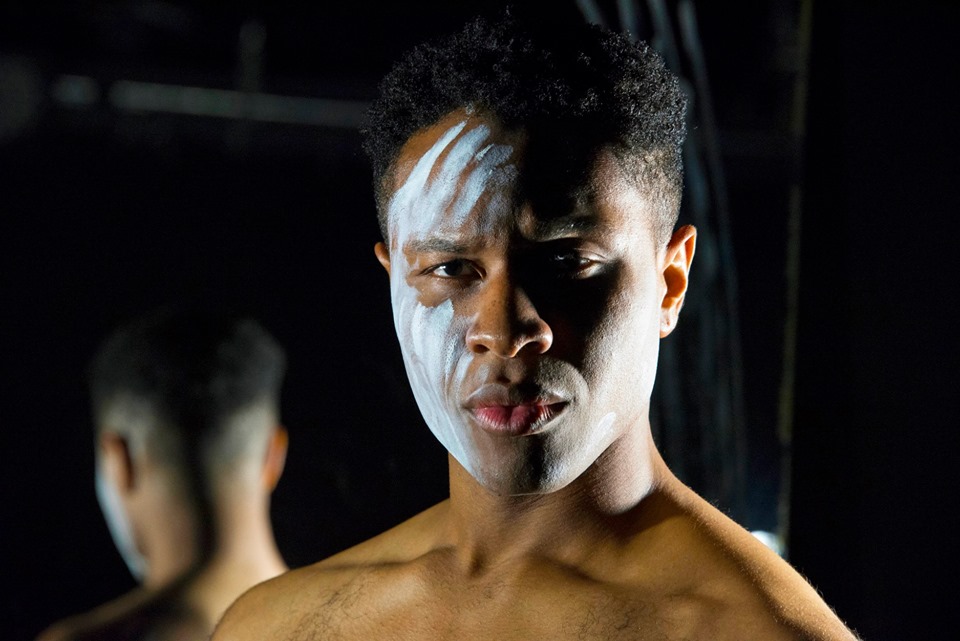 AN OCTOROON: The Point is to Make You Feel Something

When is it okay to laugh at racist stereotypes?

When a smart award-winning playwright named Branden Jacobs-Jenkins writes a play called An Octoroon and incorporates racist stereotypes and historical images that are guaranteed to make every member of the audience feel uncomfortable at some point, even while laughing – especially while laughing. Every. Single. Member. Not you, you say? We’ll see about that.

There is a plantation. In Louisiana. The kind with slaves. There is a cast system with field slaves and house slaves. The title character is a slave who is the daughter of the recently deceased master. The old master’s wife – who is never seen, because she spends the entire play on her deathbed – has an affection for her late husband’s love child. A neighboring overseer plots to buy the failing plantation and have his way with his former rival’s illegitimate daughter, the octoroon. There is a black man wearing blackface with huge red lips, a black man wearing white face with a blond wig, and a white man wearing red face and a feather headdress. There is a lot of shucking and jiving — or dancing elaborately for the entertainment of the white man. There is lying, cheating, stealing, and classism, sexism, and age-ism. There is a noose. And there is a creepy rabbit. An Octoroon is an equal opportunity oppressor.

I think people who attended opening night could be divided into three types. The majority loved it. A few hated it. And a large portion were not sure what to think. And this is one play where race does matter! Everyone’s reaction was tempered not only by aesthetic preferences, but by the viewer’s race as well. Black viewers may have felt freer to laugh but may also have identified more closely with the characters and the historical and social time period. White viewers, on the other hand, may have hesitated to laugh for fear of seeming insensitive, or being accused of appropriating black culture. These dilemmas may have been heightened by recent news stories of politicians, teachers, and prom-posers wearing blackface, and of possible lynchings – even though the last officially documented lynching in America occurred in 1981 (Michael Donald in Mobile, Alabama).

So, what could there possibly be to laugh about?

An Octoroon is a classic melodrama that is anything but standard. It deconstructs not only the genre but the whole idea of what theater should be, how the performers should interact, and how the audience should perceive it.

Jacobs-Jenkins won the Obie Award for Best New American Play in 2014 for An Octoroon as well as for his play Appropriate (produced here in Richmond by Cadence Theatre last fall). An Octoroon is an adaptation of Dion Boucicault’s similarly-titled play The Octoroon, written in 1859. An Irishman wrote a play about slavery in America, and now a black American playwright has revamped it. Using the original characters and plot,  (BTW, an octoroon is a person who is one-eighth black, invoking the “one drop” rule that was used to legally classify people of mixed race as black) Jacobs-Jenkins has included contemporary language (e.g., women referring to one another as “girl,” and the use of the word “ghetto” as an adjective) and modern-day references (e.g., contemporary dances, a boom box, some R-rated rap music, and a cell phone).

Director Dr. Tawnya Pettiford-Wates recognizes, in her director’s note, that this melodrama is challenging for both the audience and the actors. Participating in the experience of An Octoroon, one might even begin to question the role of the director! But Pettiford-Wates raises some questions of her own. “How did we arrive at the place where race, class, and identity are what determines who succeeds and who does not?” she asks. And further, “And more importantly, where do we go from here?”

An Octoroon opens with a lengthy prologue that introduces us to BJJ, a black playwright working through an identity crisis with his therapist. BJJ is played by Jamar Jones, a young black male actor whose recent roles in Red Velvet, Free Man of Color, and Choir Boy have shown him to be a highly talented and versatile actor who is rapidly rising to the top of his game. Here Jones plays the characters of BJJ as well as the two white slave masters, George and M’Closky. At one point he appears in a vest with different patterns on each half and wears half a mustache, as he has to portray both characters onstage in the same scene.

The prologue also introduces us to Playwright, a character based on Dion Boucicault, the author of the original The Octoroon. Cole Metz also plays the roles of Wahnotee, a Native American and Lafouche, an auctioneer who has come to help dispose of the Terrebone Plantation, including its slaves. Each of Metz’ characters has an affectation that makes him either endearing or unbearable. Playwright is pompous, entitled, and bitter. Wahnotee speaks in broken, Pidgeon English and some version of patois. He walks with a lumbering gait and makes that stereotypical open-palmed “how” hand sign. Lafouche walks with a little catch step and keeps scratching the reddened side of his face. Metz can make his normally innocent, rosy-cheeked baby face turn pouty and whiny or menacing in the blink of an eye. He uses physical humor with restraint and allows his face to express his every thought.

The Playwright’s Assistant is played by Jeremy V. Morris, who is silent and seemingly resentful in his service to the Playwright, but overly enthusiastic in his later portrayal of two of the plantation’s slaves, the elderly Pete who manages the household, and the young Paul who is allowed to run freely with Wahnotee, and has been given few if any chores. Like the octoroon, he is also a favored child, but his circumstances are much lower down the social scale – even in the slave hierarchy.

Minnie and Dido (Asjah Janece and Khadijah Franks) are two house slaves who are friends. Dido has recently arrived from another plantation, and Minnie was born and raised on the Terrebonne Plantation. She believes there is nothing beyond the swamps, but by the end of the play both are looking forward with hope and fear to life beyond the plantation. Realizing they are not ready for freedom, they determine that working on a steam ship is the next best step.

Trinitee Pearson has the role of Grace, a pregnant field slave who shows attitude whenever she is in the presence of Minnie and Dido. Pearson also has the role of Br’er Rabbit, who serves as a sort of cautionary mascot for An Octoroon. Br’er Rabbit is a reminder of the trickster who lives by his wits, a sort of Anansi figure with both African and Cherokee roots. I personally found the Br’er Rabbit character somewhat creepy. Perhaps it was because rabbits are usually not the size of a petite woman, or maybe it was the mime-like half-mask Pearson wore and the limp-wristed, hovering stance she adopts.

Maggie Roop plays Dora, a wealthy white heiress who has her eye on George, even though she knows his only interest in her would be because of her ability to save the family plantation from a short sale. Roop is deliciously over the top in her stylized interpretation of the delicate southern belle, dressed in a bell-shaped white dress with crinolines and hoops, and enough pink bows and frills to stock a small emporium. In her first scene, she demands that Minnie fan her. Even though she is a socialite, it seems Dora’s only friend is Zoe, the Octoroon.

The octoroon is played by Juliana Caycedo, who I have only ever seen before in Cadence Theatre’s production of Between Riverside and Crazy. Caycedo looks the part of the beautiful octoroon with her olive skin, long curly hair, and huge, innocent eyes.  She happily joins in with Roop in prancing and flouncing around the stage, twirling in her green dress, also supported by crinolines as she and her friend and so to be rival, Dora, feign fainting spells and swoon at the drop of a hat. It is obvious these are ladies who never sweat but merely “dew.” Caught between two worlds, Zoe belongs to neither.

Also in the cast, is Liam Joseph Finn, holding down the small but significant roll of Ratts, a tall, handsome ship’s captain who comes to the auction to buy slaves. Dasia Gregg’s scenic design is deliberately rustic and dusty looking. She has lined the walls with jagged boards and littered the floor with crates and overturned chairs. This setting suggests a sense of impermanence, decay, and danger. Erin Barclay’s lighting maintains the dark and dreary theme, making it all the more startling and effective with the space lights up with the flash of George’s old-fashioned camera – the kind with a black curtain on a tripod. Projections by Gregg and Kelsey Cordrey keep the audience informed of the progress of the five acts, written in an elaborate old-fashioned font, and occasionally draw interest with animated flames, or the photograph of an actual modern day lynching. The latter is so disturbing that even BJJ asks to have it removed.

Breaking with all sorts of tradition, instead of performing the fourth act or the “sensation” act of the melodrama, BJJ, Playwright, and Assistant tell us about it, using a few props, and even rewinding to back up when BJJ loses his train of thought.

An Octoroon raises so many questions. This is the sort of play that cries out for a talk-back. (Dr. Pettiford-Wates indicated three are scheduled for later in the run.) There is more here than meets the eye. As one actor says at the end of Act Four, “the point of this whole thing was to make you feel something.” Having tapped into those feelings, they need to be discussed, examined, analyzed, and shared with others. This is not theater designed to merely entertain. Few would leave saying, “I liked it,” or “I enjoyed it.” More likely, others, as I did, left saying, “we need to talk about this!”

One thought on “AN OCTOROON: We Need to Talk”