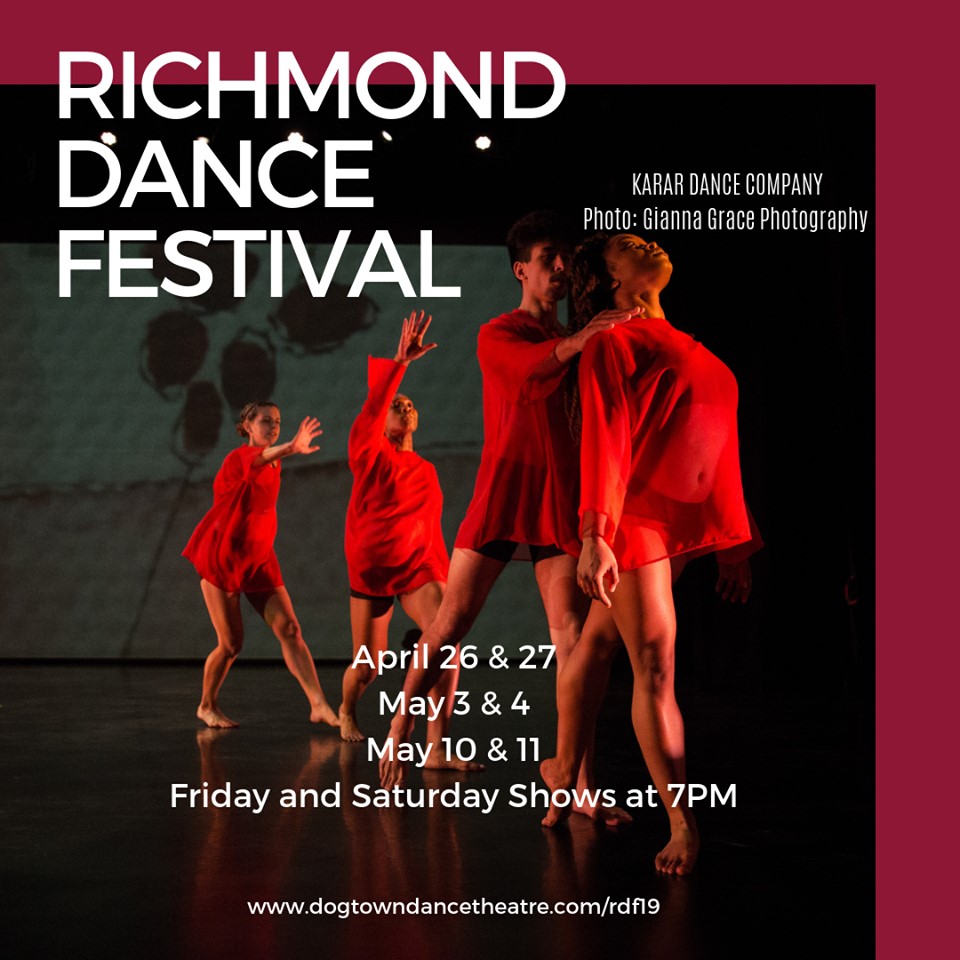 I couldn’t attend the first weekend of the 6th Annual Richmond Dance Festival presented by Dogtown Dance Theatre. After seeing Weekend Two I feel even worse about missing the first weekend.

The program featured 8 dances and 3 dance films which showcased works by local choreographers (Len Foyle of Snap Soup Dance, Kara Robertson of Karar Dance Company, Boris Karabashev of RVA Salsa Bachata Foundation, LaWanda Raines of RVA Dance Collective, and Shannon Hester of Pole Pressure), and choreographers from the DMV region (Natalie Boegel; and Paul Emerson Gordon of Company | E,  and Robbie Priore of Prioredance, both of Washington, D.C.­). The dance films hailed from the USA and abroad (Holly Wilder, Wilton, CT; Mateo Galindo Torres, Toronto, Canada; and Maria Piva, London, England). It may look overwhelming when spelled out like this, but all 11 works were spaced out in a well-paced program that ran just a bit over two hours, including one intermission.

It was a diverse program, but I had several personal favorites. The film Weightless, directed by German Prieto with Mateo Galindo Torres and Falciony Patiño, and choreography by Torres and Patiño broke all the physical laws. After a while, I stopped trying to figure out which way was up, and whether the dancers were pushing off from or suspended over a wall, the ceiling, or the floor and disembodied body parts drifted into our field of vision or a dancer twisted impossibly on the back of his wrist while suspended seemingly in midair. This beautifully made film created a whole new dimension of movement.

Another film, The Field, by Holly Wilder movingly showed a woman freeing herself from the ties that bound her. Her Inner Monologue, The Past, her Body Image, and her Support System were literally and figuratively woven into her hair with yards of rope held by others who gave voice to the voices in her head, until, using a pair of golden shears, she cut herself free. With each cut, a voice was silenced, leaving her free – in a large field. This piece was so simple, yet so powerful, and ultimately so relatable.

Another piece I could relate to was LaWanda S. Raines’ precautionary tale, Inappropriate Miss. Six dancers, four of whom emerged from beneath a giant white billow, moved as they spoke words of caution that many young girls are taught: don’t tell all your business; don’t tell the truth; don’t talk to strangers; sit with your legs closed; and most of all, don’t try to save nobody! The trouble is, many of these cautions are inhibiting and Raines did an excellent job giving voice to the duality of growing up female. Even more poignantly, one of the dancers was her own 16-year-old daughter, and one was male.

The program also included Paul Gordon Emerson’s duet Entangled, set to Ella Fitzgerald’s Summertime. The lyrical duet included some of the heat of a tango, an effect that was enhanced by a touch of acoustic guitar. Natalie Boegel’s Loud Right was accompanied by the dancers making murmurs, clicks, and raspberries (you know, that thing you do with your tongue on babies’ tummies), graduating to screeches, claps, and even spanking. At one point, they ask, “Do you wanna hear the most annoying sound in the world?”

Len Foyle and Jonathan Starr had the duo in Just Who Are You to Tell Me So? approach the stage from behind the audience. Their simple movements of walking, skipping, and jumping were accented with gestures from a simple turn of the head to one dancer poking the other with her foot – all done with poker faces that made it feel less supernatural and just a tad humorous. The red splotches of Katy Pumphrey’s projections for Kara Robertson’s The In-Between reminded me of splatters of menstrual blood while the dancers’ actions of walking, running, gathering, watching and waiting took on classical lines, ending with a formal procession.

Perhaps most unusual or unexpected were RVA Salsa Bachata Foundation Team’s performance of I Want You Back, with three couples dancing to Tony Succar’s cover of the song of the same name, from album The Latin Tribute to Michael Jackson, and Schannon Hester’s Shore Leave, a beautifully athletic work performed on two poles.

So often, when there are this many works on a single program, they all start to run together, creating a blurry memory. Not so with this program; each work was distinct and memorable on its own terms, and each choreographer’s voice was unique and legible, if that word can be applied to choreography. This program runs one more time, Saturday, May 4 at 7:00pm, and there is a new program for the third and final weekend, May 10 & 11. Also, on Saturday, May 4 at 2:00 in the afternoon, more than 164 youth from RVA, Harrisonburg, and my hometown of Brooklyn will perform in the second annual Next Generation program. Dogtown Dance Theatre’s Artistic & Executive Director, Jess C. Burgess, believes Richmond has all it needs to be a “dance destination city.” 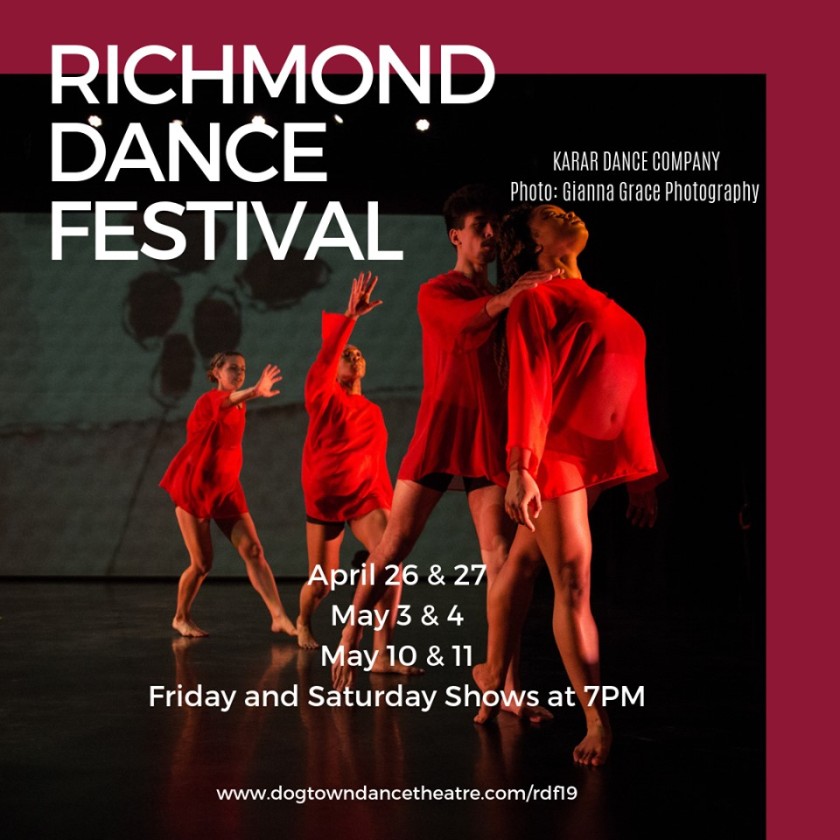