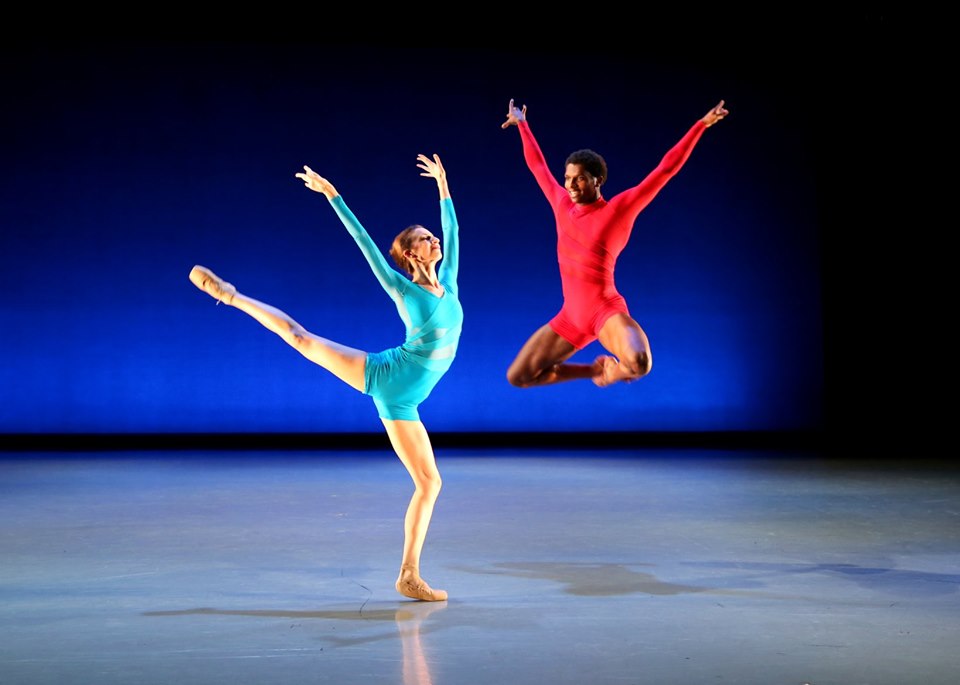 The Richmond Ballet concludes its current Studio Series with a program of three beautiful ballets, each different in style, look, and feeling.

Ron Cunningham, who spent 30 years as director of the Sacramento Ballet (along with his wife, Carinne Binda) choreographed Summerset in 1981. (The couple transitioned to Emeritus status with the Sacramento Ballet in 2018.) Summerset was first performed by the Boston Ballet in 1981 and the Richmond Ballet introduced it on the stage of the Carpenter Center for the Performing Arts in 1988.

Performed by three couples, led by Sabrina Holland and Mate Szentes, with Lauren Archer and Thel Moore, III and Abi Goldstein and Anthony Oates, the ballet features contemporary choreography with classic lines and vocabulary. Said to have been inspired by the royal wedding – not, not that one, but the wedding of Prince Charles and Princess Diana – Summerset is mostly flirtatious and light, but there were some moments that seemed out of character, as when Archer was pulled across the floor while in a full split or when the three women all landed in a split and were pulled up by their partners. That particular movement and posture seemed overly gymnastic and less, well, royal, and took me out of the lyrical fantasy and romantic mood created by the otherwise winning combination of Cunningham’s choreography with Edward Elgar’s music. The most beautiful moment, for me, was an incredibly gentle and sustained phrase where Szentes slowly lowered Holland from his shoulder to the floor, as if she were the most precious woman on earth and he did not want to shatter her, and the very thought of her feet touching the floor was troublesome.

The lovely and ageless 2017 Kennedy Center Honor award winner Carmen de Lavallade returned to set Sweet Bitter Love on the company, having first worked with Richmond Ballet on Portrait of Billie in the fall of 2017. Initially created as a solo for herself, Sweet Bitter Love (2000) developed, over time, into a duet, set to two songs sung by Roberta Flack (“Until It’s Time For You To Go” and “Sweet Bitter Love”) and one sung by Donny Hathaway (“For All We Know”). It’s the kind of music you listen to when you are home alone, with the lights dimmed, and a glass of wine nearby.

Performed by my favorite dance couple, Maggie Small and Fernando Sabino, Sweet Bitter Love presents both the woman’s and the man’s perspective of a love affair that must end – seemingly before it has even had time to really begin. From Sabino’s hinged jazz turns to Small’s sustained movements and poignant moments of stillness, the work pulled on the acting skills of the two dancers as much as their dance technique. There are heartrending moments as when Sabino backs away from Small, who is kneeling with her back to him. While backing away, he shakes his hands in helpless frustration. Later, as she mourns the loss of love, arms stretched over head and then reaching empty arms in front, we see him briefly in an upstage corner, buttoning his jacket as he takes one last glance. The costumes for Sweet Bitter Love were designed by de Lavallade’s husband, the late Geoffrey Holder, and Chenault Spence lighting lovingly echoed the blues of Smalls’ gown and caught the delicate sparks of glitter in her hair, gown, and shoes. The overall effect – music, movement, costumes – is breathtaking.

The program closed with Symphonic Dances (world premiere, May 7, 2019), created by the London-born choreographer Rex Wheeler, who also created Lenten Rose for the Richmond Ballet in 2015. Bringing the program full circle, Wheeler also has a history of creating works for the Sacramento Ballet.

Symphonic Dances, performed by six couples, is a work in two parts set to the first and third sections of Sergei Rachmaninov’s music of the same name, which he composed in 1940. Interestingly, Rachmaninov is believed to have discussed the possibility of Russian choreographer Michel Fokine creating a ballet set to this work, but Fokine’s death in 1942 prevented any collaboration on this work between the two artists.

In the first part, the dancers wear lavender and fuchsia, the partnering is more traditional, and the lighting more muted. In the second part, the dancers wear bold red and blue (more of a turquoise blue, perhaps), and the lighting, likewise, shifts into bold washes of red, purple, and blue that seems to reflect the boldness of the music in this section, as well, which has rhythmic drums and clashing cymbals. The colors and movements are in harmony with the shifting tones of the music, creating a total environment of sound, color, and movement as the dancers move both gracefully and energetically through Wheeler’s three-dimensional shifting patterns.

It was a wise decision to place intermission between Sweet Bitter Love and Symphonic Dances. Pretty as Symphonic Dances appeared, and as good as it sounded, it was somewhat of a difficult transition to move from the drama of de Lavallade’s love ballad to the more contemporary interactions of Wheeler’s work.

The Studio Three performance run through Mother’s Day (hint, hint), with the remaining performances on Friday and Saturday at 6:30pm and 8:30pm, and Sunday at 2:00pm and 4:00pm.