ALL MY SONS: by Arthur Miller

Arthur Miller’s tragic family drama, All My Sons, is based on a true story of events involving the Ohio-based Wright Aeronautical Corporation. During WWII the company knowingly shipped defective engines for use in military aircraft. Miller adapted the story into a multi-layered tragedy of moral conflict that addresses the question, is family everything?

At the heart of the play is Joe Keller (portrayed as a longsuffering cynic by Barry Pruitt). It is gradually revealed that Keller and his former business partner, who is still in prison, were convicted of supplying the defective engine cylinder heads, putting profit above the lives of US servicemen, and possibly contributing to the deaths of at least 20 young men. Keller, much to the dismay of many of his neighbors, was exonerated and released.

The play opens as Keller enjoys a Sunday morning in the backyard of his home, along with his son Chris (a returned veteran, played by George Dippold) and neighbors Jim Bayliss (a physician simmering in a mixture of disillusion and idealism, played by Adrian Grantz) and Frank Lubey (just a regular guy, played by Frank Creasy). The Keller men share the morning paper, with the younger telling his father he reads the book reviews but never reads the books, because, “I like to keep abreast of my ignorance.” The elder Keller’s relentlessly boisterous repartee is obviously covering up something, but the depth of the devastation isn’t revealed until the second act.

Meanwhile, there are many odd and interwoven interactions and conversations. Kate Keller (played with appropriate hysteria by Jacqueline O’Connor) refuses to accept that her son Larry, who has been MIA for more than three years, is dead and won’t be coming back. His room is ready for his return, right down to freshly polished shoes. How do we know this? Well, Larry’s girlfriend, Ann Deever (Maggie McGurn), who grew up next door to the Kellers, is staying in his room. No, she hasn’t been there waiting patiently for three years. She moved to New York after her father, Joe’s business partner, was imprisoned, but has returned for a visit so that Chris can break the news to his father and emotionally unstable mother that he plans to marry his brother’s girl.

Bayliss’ wife, Sue (Louise Mason) turns out to be a pretty shrew who delivers a devastating ultimatum to Ann while Frank’s wife, Lydia (Tara Callahan Carroll) is a bubbly housewife known mostly for laughing too much. A cute neighborhood kid, Bert (played on Saturday by Jude Yaktin, who alternates in the role with Aidan Montefusco) has been deputized by Joe as a sort of neighborhood watch, but the jokes about Joe having a jail in his basement turn out not to be so funny in the end. Matt Hackman makes a brief, game-changing appearance as Ann’s brother George, a New York lawyer by description but not in his frenetic demeanor.

It’s hard to believe that all this action takes place over the course of a single day, as lives and even generations are adversely affected by the words and actions shared. All My Sons is one of those theater experiences that left me sitting in stunned and contemplative silence as many around me rose to their feet applauding.  I understand that it is customary to applaud the work of the actors, but the dark side of human selfishness and greed that had just been revealed seemed to merit something other than applause.

Given the depth and scope of the story, I was somewhat disappointed in the delivery, which was overall too broad and too affected. Something seemed off kilter, not just in the characters’ moral development but in the actors’ execution. Some staging and body placement – especially as things became heated – even distracted me from the dialogue. Director Width, in a rare occurrence, seemed to miss the mark of recreating for me the magic that marked All My Sons as one of his favorite plays in the late 1960s when he designed the set for a community theater production. Maura Lynch Cravey’s costumes are appropriate for 1947, and Tom Width’s house exterior with its back porch showing a glimpse into the home’s hallway and part of a backyard is generically inviting. It’s not until you get to know the Kellers that you realize that first impressions are not always correct. 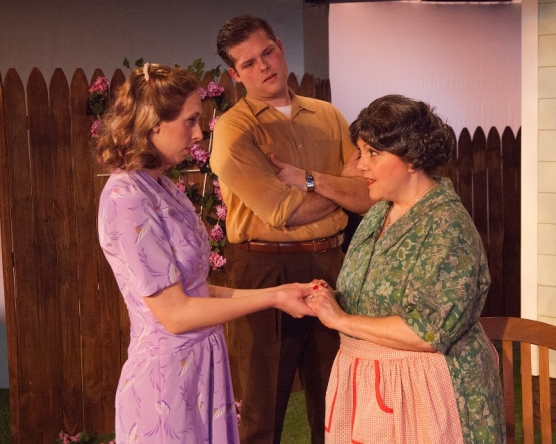 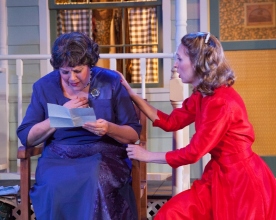 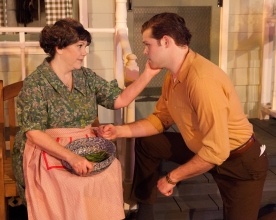 TO DAMASCUS: The World Premiere of a New Opera by Walter Braxton

If you’ve never seen or heard an opera, and the very thought of attending an opera sends shivers up and down your spine, you must understand that To Damascus is not your everyday opera. If you are an opera aficionado, To Damascus may be pushing the envelope over the edge (yes that’s a mixed metaphor, but so appropriate for this occasion). I think I heard someone describe Walter Braxton’s new postmodern musical as an “anti-opera,” but if you chose to use that definition, please think of it in a positive way.

What is To Damascus about? Well, it has no story in the traditional sense. But, as the title suggests, it has a deep spiritual foundation. In the New Testament, in Acts chapter 9, the Damascus Road is where Paul (then Saul) met Jesus and was converted. A Damascus Moment has come to refer to a turning point in one’s life, a sudden interruption in the day-to-day rituals that define one’s existence and often sets one on the way to living life with purpose and meaning.

There are many rituals in To Damascus. Act One begins with the five vocalists cleaning, wrapping, and packing shoes. Stacks of vintage suitcases and trunks fill the stage, and many of them hold shoes – everything from stilettos to brogans. Shoes are important when traveling. Act One ends with the cast members circling the stage in a ritual that has them assembling BLTs – yes, sandwiches.  There is a toaster and a hot plate, a bag of Wonder Bread, and all the fixings. A traveler needs sustenance.

Act Three begins with water rituals: hand washing; rinsing apples; pouring water from a bottle to a glass and back again. Each act is repeated over and over, not unlike the daily rituals repeated by people with OCD tendencies. During the water rituals, there are no words, just instrumental music.

Mr. Braxton’s music is beautiful, mesmerizing. Oddly, it tends to stay on the same level, with gentle swells and rises, like the gentle hills of an urban park, rather than the rolling hills of wide open acres. A sixteen-piece orchestra was crammed onto a raised platform above the stage, filling the space with the pastoral strains of Braxton’s score – a score that, at times, was in stark contrast to the carefully choreographed postmodern confusion taking place on the stage.

In his pre-show curtain talk – which took place in the theater’s lobby, instead of inside the theater proper – Firehouse Artistic Director and the show’s Director, Joel Bassin, shared that To Damascus” is not your ordinary opera, that there is no traditional story line, and that it is best to focus on the sounds rather than the words.

Mr. Braxton takes many of his words directly from the bible. There is no libretto in the traditional sense, nothing to clue the audience as to what is happening, no synopsis as would be provided for an opera written in German.  Excerpts included in the program include the words of Psalm 121 and a variety of poems and prose.

Michele Baez (soprano), Michael David Gray, and Chase Peak were the de facto lead singers, with Imani Thaniel (a VCU theater major) and Elisabeth Carlton Dowdy (a VCU Music Education graduate) in supporting roles.  Ms. Thaniel’s staging sometimes kept her partially hidden from the audience; this was true whether she was positioned stage left or stage right. She was often hidden by stacks of luggage.

Ms. Baez and Mr. Gray had the most commanding voices, but the performers had little direct interaction. While they rarely looked at or communicated directly with one another, they had plenty to do, interacting with a wide and wild assortment of props that seemed to appear out of thin air. It was almost as if the director had incorporated subtle magic tricks. Mr. Braxton’s music and Mr. Bassin’s direction were a perfect fit for The Firehouse, and if some left the theater wondering what happened – at least they left relaxed rather than agitated. To Damascus does not assault the senses, but somehow amplifies them.

Leilani Fenick is the Musical Director and Vocal Coash, and Michael Knowles deftly conducted from a raised platform in a downstage corner. Rather than a set designer, To Damascus has Environmental Design by Isabel Layton, and the production team also included Lighting Design by Bill Miller and Costumes by Kathleen O’Connor.

As for Walter Braxton, he is an African-American composer born and raised in RVA. He was a child prodigy – while attending Mary Scott Elementary School, he wrote the class song. To Damascus is an opportunity to learn about and appreciate the work of a local artist who may be unknown to too many of us.

Walter Braxton was Richmond’s child prodigy – composing symphonies before he was even out of high school. A mental breakdown at age 18 ended his promising career. January 19 at 7:30pm, the Firehouse Theater presented Braxton’s opera, TO DAMASCUS, for the very first time, followed by Mark Holmberg’s story at 11.