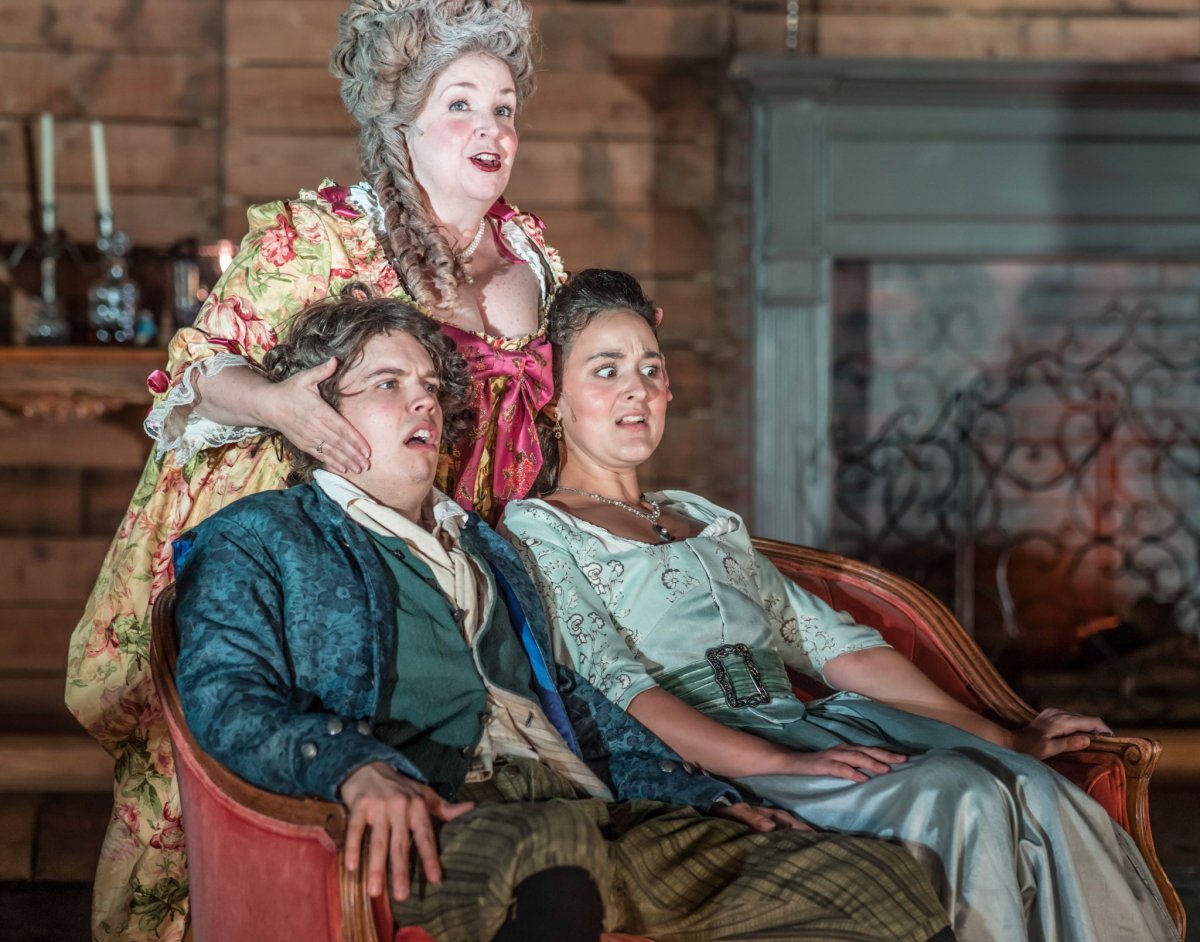 THE PLAY THAT USHERED IN A NEW WAVE OF HUMOR

Dating back to 1773, She Stoops to Conquer has long been considered one of the most popular English-language comedies. Interestingly, it was a major theatrical success by a relatively unknown playwright – Oliver Goldsmith – and the play that set Director James Ricks, then a middle school student, ablaze with a passion for live theater. It is also credited with being the source of the phrase, “ask me no questions and I’ll tell you no lies.”

The plot is a familiar one – two affluent families, the Hardcastles and the Marlows, arrange to introduce their children, Kate and Charles, with an end goal of marriage. But Kate’s spoiled, immature older half-brother Tony Lumpkin sees this as an excellent opportunity to wreak havoc of monumental proportions. Tony likes to hang out with the masses at the local pub – at one point Mr. Hardcastle say of him, disparagingly, “the only school he’ll ever go to is the ale house.” And that is precisely where he is when he intercepts his sister’s would-be suitor and his traveling companion – at the local pub – as they search for the remotely-located country home of the Hardcastle family. Tony convinces Charles that the Hardcastle estate is an inn. There ensues a “comedy of errors,” and one fascinating result is that young Charles Marlow, who has been described as educated and shy, imperiously treats his unsuspecting hosts as servants, displaying a side Kate was not expecting. Kate, however, has her own agenda, and disguises herself as a barmaid to further explore the character of her would-be suitor.

Like any good sitcom, there are subplots and counter-plots to the main theme. These include a secret love-affair between Kate’s cousin Constance and young Marlow’s friend George Hastings, Mrs. Marlow’s attempts to hide an inheritance, and Tony’s attempts to avoid an arranged marriage of his own. This simplified synopsis does not do justice to the live production. She Stoops to Conquer is neither trite nor stereotypical. Supporting characters are as interesting as leading characters – establishing a sort of social equality that was far ahead of its time.

Debra Wagoner was delightful in the role of Mrs. Hardcastle, the master (or mistress) of much of the seemingly unintended humor. In one of the latter scenes, she gets her comeuppance when her own son (Josh Mullins as Tony Lumpkin) tricks her into thinking she is lost in the wilderness. Mark Persinger as her husband, proved to be a stark contrast to Wagoner’s character and brought his own unique style of humor. Hardcastle, you see, is decidedly old-fashioned, stuck in the past and despises anything modern, while his wife (a social climber) and daughter (a sensible young woman with a mind of her own) yearn for modern fashions and are attracted by the lure of the city. Wagoner proved to be a capable antagonist, while Katy Feldhahn (Kate) was more than capable of conquering.

Josh Mullins, as Mrs. Hardcastle’s spoiled son, happily wreaked havoc at every turn. Calie Bain as Kate and Tony’s cousin (and Tony’s reluctant intended) Constance Neville was solid and dependable in a somewhat predictable and unremarkable role while Ian Page played his role close to the edge and over the top as the socially challenged Young Marlow.

That being said, She Stoops to Conquer was a delightful summer divertissement, comedically ahead of its time, pleasant and fairly well-paced, with direction by James Ricks. It just wasn’t my cup of tea, but I would certainly give it a second chance in the future.

NOTE: Unfortunately, this summer’s Shakespeare Festival took the brunt of the summer storms. Both productions at Agecroft Hall were plagued by cancellations due to weather, and, alas, the closing production of She Stoops to Conquer was no exception.

She Stoops to Conquer

Run Time: About 2 ½ hours with one intermission