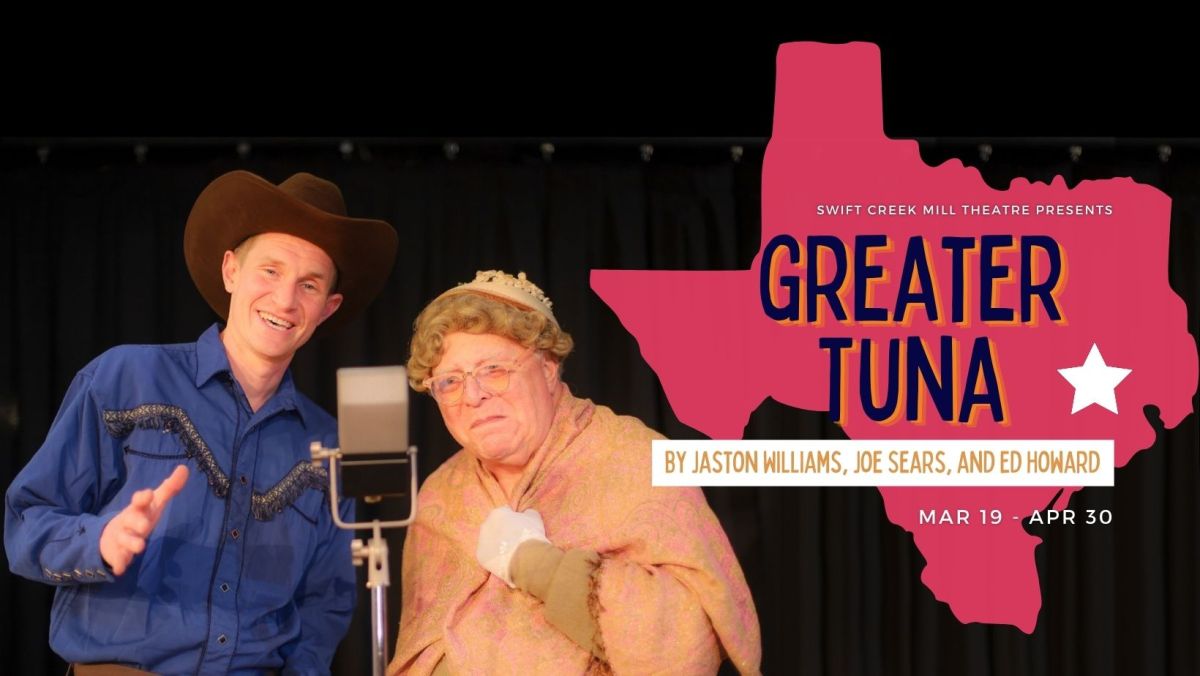 There are so many ways I could write about GREATER TUNA. So, I’ll just start and see where this goes.

The first in a series of four satirical plays about the fictional town of Tuna, TX, GREATER TUNA requires two actors to portray twenty citizens of this conservative Texas community. John Hagadorn and Bartley Mullin are so good at quickly transforming from one character to another that it’s almost possible to overlook the content they are sharing that is making us laugh out loud. Hagadorn thoroughly encapsulates the town’s KKK leader Elmer Watkins, with his baseball cap pulled low over his eyes and so convincingly inhabits the characters of town matriarchs Bertha Bumiller and Pearl Burrus that we almost forget he is a male actor portraying these stereotypical southern women. Hagadorn is familiar with the inhabitants of Greater Tuna, having appeared in SCM’s production of A Tuna Christmas (2016-2017 season). This is the Mill’s first production of Greater Tuna, the original play, since 1985, and director Mark Costello returned to steer this wild ride and keep it on track.

Then there’s Bartley Mullin. His interpretation of the chain-smoking used weapons shop owner, Didi Snavely (“if we can’t kill it, it’s immortal) and the whiny and angst-filled teenager Charlene Bumiller are all that and more. His endearing but jumpy Petey Fisk, who works for the Greater Tuna Humane Society (who knew there were enough people in this town to support such an organization!) and the pretentious Vera Carp (Vice President of the Smut Snatchers of the New Order) are wonderfully over the top. Hagadorn, his face hidden behind a newspaper, provides the voice of an annoying puppy Petey is trying to find a home for. It is all but impossible not to laugh and that reminds me of what Swift Creek Mill artistic director Tom Width said of A Tuna Christmas, that he produced and directed in November 2016, “It’s so wrong in the best kinds of ways.”

Right off the bat, we are introduced to Thurston Wheelis and Arles Struvie, the anchors of the town’s radio station, OKKK. The station’s call letters are repeated frequently, and yes, the “KKK” stands for just what you think it does. One of the first bits of news is the announcement of the winners of the town’s essay contest. First place goes to an essay entitled, “Human Rights, Why Bother,” while the second and third place winners are “Living With Radiation,” and “The Other Side of  Bigotry.”

Of course there is a group tasked with banning books, to protect the town’s children from undesirable and divisive literature such as Roots, Bury My Heart at Wounded Knee (a book that even students in my NYC high school protested against until the teacher caved in and removed it from the syllabus), Huckleberry Finn  (because it showed a child cavorting with a criminal, no mention of “Nigger” Jim), and even Romeo and Juliet (because it portrays young people disobeying their parents). Then there are The Smut Snatchers of the New Order, whose focus is cleaning up the dictionary. Just send them a word you want removed. . .

When a visiting reporter brings up the concept of intellect, Bertha Bumiller, the woman he is interviewing, responds with a deadpan, “I don’t believe we have that here in Tuna.” Act One ends with Pearl Burrus and Stanley Bumiller running over a dog to cover up the fact she poisoned it! In another of Greater Tuna’s few somber moments Stanley, at one point, reveals a dark secret surrounding the sudden death of the town’s judge.

The dilemma, of course, is that Greater Tuna is so authentically hilarious and Hagadorn and Mullin are so darned good that we find ourselves laughing at uncomfortably racist statements and stereotypical images of people that, frankly, most of us have encountered in real life – and some call family. So, how does one approach Greater Tuna? Do you just ignore the racism and bigotry and laugh at the humor? Do you acknowledge the political incorrectness and call it out? And if so, to what purpose? It is, after all, a satire – and it is intended to expose and comment on our stupidity and foibles. But. . .does that make it right, or relevant? I do not have answers to any of these questions. I just know that at least one attendee left at intermission and those who stayed for the final bows seemed happy and satisfied. And yes, I laughed. Without apology.

Your contribution in support of RVArt Review is appreciated.