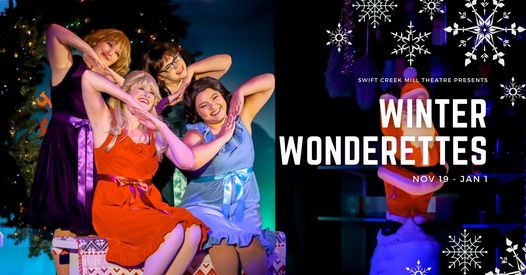 The year is 1968 and it is the annual staff Christmas Party at Harper’s Hardware in Springfield USA. (Take your pick, there are 30-40 towns and cities named Springfield, depending on your source.)

The store has been decorated with gigantic gift boxes and the actors complete the decorating onstage, festooning a fireplace, adding a tree topper, and turning on the lights that extend throughout the theater, bringing the audience into the performing space. Did I say actors? I meant the Marvelous Wonderettes, the former Springfield High Song Leaders, created by Roger Bean in 1999 for a one-act musical in a black box theater in Milwaukee. The quartet of friends, Missy, Suzy, Betty Jean, and Cindy Lou, met with such popularity that the Marvelous Wonderettes gave birth to three sequels. WINTER WONDERETTES debuted in November 2003 and in 2008 the harmonizing of the girl group caught the attention and heart of Swift Creek Mill Artistic Director Tom Width at a performance at the Westside Arts Theatre in NYC.

Now, the four are decorating and harmonizing on the Swift Creek Mill Theatre stage that has been transformed by Width’s scenic design magic into a classic hardware store, the very same hardware store where Betty Jean has been employed since graduating from high school. The tree has been lit, the stage has been illuminated, Santa’s throne has been wheeled centerstage, and Santa’s entrance song has been sung, but where is Santa?

There is just enough of a plot to keep WINTER WONDERETTES from being a concert. We learn that Missy is newly married, while Betty Jean who has risen to a position in corporate sales has recently separated from her husband, Johnny. Suzy is pregnant and married to her high school sweetheart Ritchie who is allegedly running the lights for the program and Cindy Lou is the group’s designated bad girl (with a heart of gold).

These roles have been brilliantly cast with Anne Michelle Forbes and her outrageously contagious giggle as Suzy, Georgi Hicks as Missy, Rachel Marrs as Cindy Lou, and Alanna Wilson as Betty Jean. Maura Lynch Cravey has dressed them in matching dresses, in red, green, purple, and blue, with a festive ruffle around the neck and a satiny ribbon tied at the waist. These are topped off with 1960’s hairstyles that are puffy but stop short of the extreme bouffant or mile high beehive.

The songs are as classic as the hairstyles, from Act One’s “Rockin’ Christmas Medley” (“Rockin’ Around the Christmas Tree,” “Jingle Bell Rock,”) traditional songs (“O Tannenbaum,” “Santa Clause is     Comin’ to Town) and Betty Jean’s heartfelt “Christmas Will Be Just Another Lonely Day” to the “Bells Medley” and “Santa Baby” in Act Two. And then there’s Suzy’s stunning tap-dance turn as “Suzy Snowflake.”

WINTER WONDERETTES is a traditional, feel-good Christmas musical comedy, but it would not be complete without a few twists and turns. When Betty Jean runs off in search of the missing Santa/Mr. Harper, she returns with a stack of envelopes. After passing them out to the staff – many of whom are audience members – everyone is devastated to find the envelopes contain pink slips instead of the expected Christmas bonus checks. The audience is also included in a game of Find the Elf and Missy’s new husband is also selected from the audience.

Oh, and lest I forget. Is it just me, or do the Santa dolls the four women hold at the top of the show look like Tom Width?

With some 25 songs and a lively, unseen band under the direction of Paul Deiss, WINTER WONDERETTES moves along at a lively pace that doesn’t even seem like an hour and forty-five minutes. This show doesn’t make you work, doesn’t make you weigh options or ethics, it’s just pure, delightful, musical entertainment that hits the holiday spot – with a few snowflakes thrown in for good measure.

Written and Created by Roger Bean