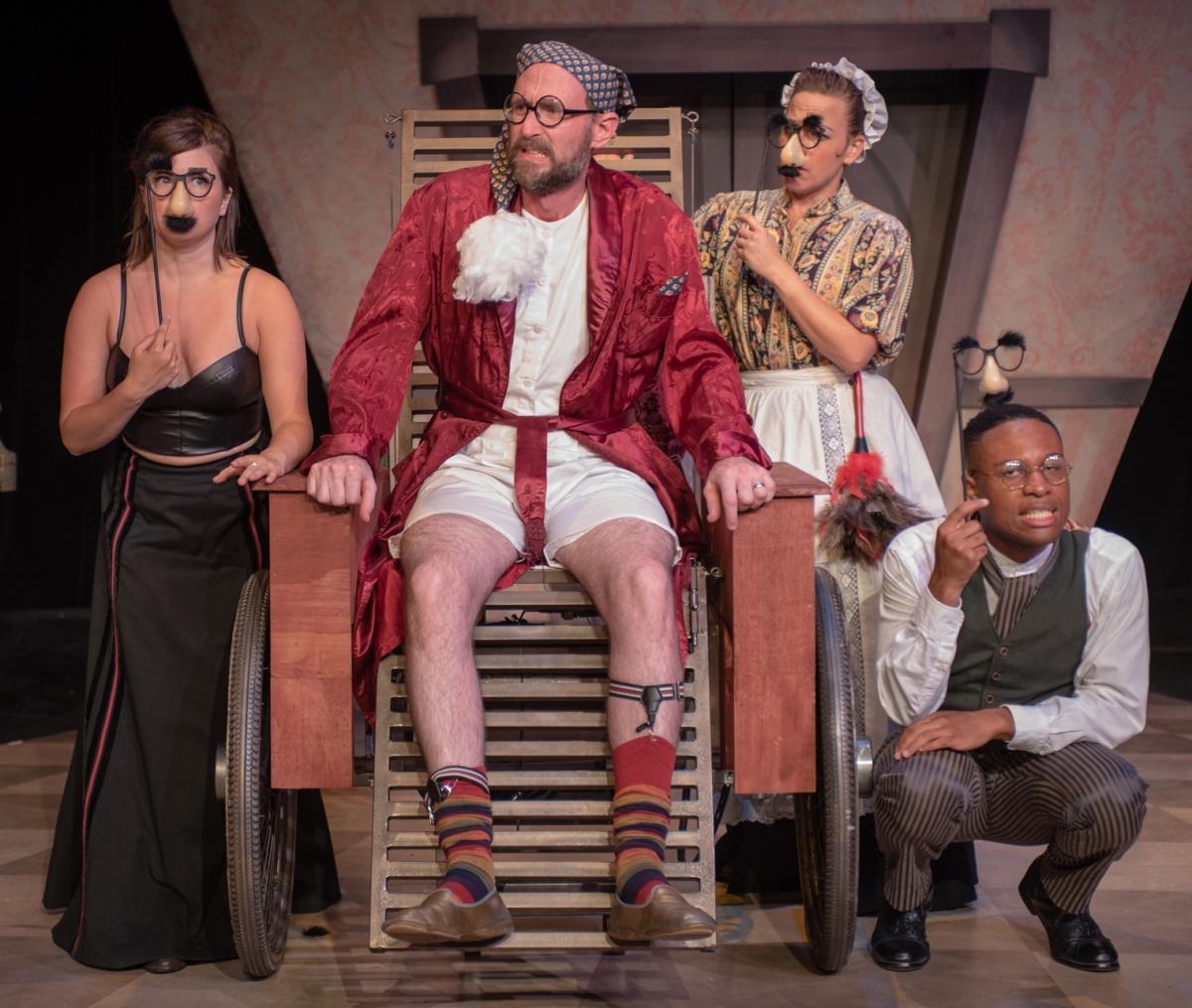 If silliness and slapstick are your schtick, Josh Chenard and Jane Mattingly’s modern adaptation of Moliere’s The Imaginary Invalid (aka The Hypochondriac) is right up your alley. If not, the Firehouse production of Invalid is still worth seeing, for a number of reasons.

First, there is Chris Raintree’s set. Simple, yet elegant, the tiled floor and single wall remind you of those perspective rooms in the children’s museums – you know, the ones that make you look very tall or very short, depending on which side you stand. The set also includes a quartet of beautiful metal chairs – ornate barstools, really – for which Blair Rath is given a credit in the program as “chair fabricator.” They really don’t have anything to do with either the 19th century in which the play is set, the 17th century, in which the original version premiered, or today, but they are quite lovely, if a bit uncomfortable without the addition some plush cushions.

The pre-show curtain talk includes some discussion about the pronunciation of the title, whether it should be IN-va-led (i.e., unwell) or in-VAL-ed (i.e., null and void). It is, of course, open to interpretation. The main character, Argan (Andrew Firda), is, after all, a hypochondriac, but the modern references to universal healthcare and politics – there’s even a reference to the Artsies nominations – make the second definition just as, well, valid. And, to get the audience warmed up, everyone passes through a team of medical professionals on the way to their seats and gets treated to a taste of “laugh yoga” by Slash Coleman. Don’t forget to fill your prescription at the bar and get your bill on the way out! Yes, there is a lot going on here.

Moliere’s three-act farce has been adapted as a two-act comedy, with many modern references, but it retains most of the original characters and plot.  Argan, a wealthy hypochondriac, plots to marry his daughter Angelica (played with delightful gusto by Allison Paige Gilman) to Thomas Diaforus (Kenneth W. Putnam), the inept son of his physician, Dr. Diaforus (Christopher Dunn). But Angelica is in love with Cleante (Jamar Jones) and enlists the help of her father’s sassy maid, Toinette (Donna Marie Miller) to thwart her father’s plans as well as protect her inheritance from her scheming stepmother, Beline (played by Kirk Morton in elegant drag). And if no one else has mentioned it, I will: the hesitation over the unannounced appearance of Cleante took on a whole new dimension given that Jones is, shall we say, “not white.”

There ensues a comedy of error with much slamming of doors (even though there are only two actual doors) and people hiding in plain sight or behind silly masks that disguise nothing.

It’s all done in good fun, and rhyming couplets. The play retains a deliberately inserted unnecessary musical number, a hilariously bad operetta, countless fart jokes, a messy enema scene that requires the assistance of a stagehand and some plastic ponchos (I thought I could actually smell the. . .never mind), and the voice of Mel Brooks as God. And yes, Brooks gets a credit in the program, too. (This is a program that deserves to be read.)

Miller is delightfully over the top as Toinette. I enjoyed Firda as Argan and Gilman as his daughter, Angelica. Dunn brought a slightly sinister edge to Dr. Diaforus, and Putnam was hilarious as Thomas (with the accent on the second syllable), providing the best physical comedy of the evening. Morton’s portrayal of Beline was divine, and Jones’s constant correction of everyone’s mispronunciation of his name may or may not have been a sly reference to the difficulty many people have with some “black sounding” names. Hmm. Race. Gender. Politics. Class. Misogyny. Did anyone or any issue get overlooked?

There’s a lot going on, and the laughs flowed steadily throughout the evening – which runs just under two hours, including an intermission. Chenard’s well-paced direction reflects not just an eye and an ear, but a heart for comedy. But for all the effort and effects and interaction, at the end, I felt maybe they tried too hard, maybe there was a bit too much hype, maybe they raised our expectations too high. It was a delightful evening, but I somehow expected just a little more.

One thought on “INVALID: When What Ails You Hits the Fan”