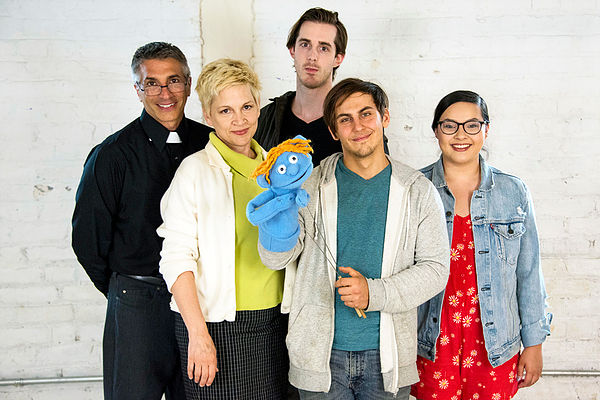 HAND TO GOD: The Devil Made Me Do It

A co-production of  TheatreLAB and 5th Wall Theatre

Weird – in a very creepy way – and funny – in a very irreverent way – Robert Askin’s Hand to God is probably the most unsettling study in family dysfunction I’ve yet so see on a stage. A co-production of TheatreLAB and 5th Wall Theatre directed by Gary C. Hopper, Hand to God features a remarkable performance by Adam Turck and a commendable performance by Kimberly Jones Clark – who will not soon be nominated for mother of the year.

The recently widowed Margery (Jones Clark) and her teen-aged son Jason (Turck) have not fared well in the six months or so since Margery’s husband died of a heart attack. Margery has been depending on her son for support and Jason seems to alternate between blaming his mother for his father’s death and blaming his father for abandoning the family. Their kind-hearted Pastor Greg (Fred Iacovo) – who apparently skipped the seminary coursework in grief counseling – has ill-advisedly placed Margery in charge of the church’s puppet ministry, hoping to fill her idle time and distract her from her grief.  Iacovo initially comes off as mild-mannered as Mr. Rogers, but in the second act he boldly and surprisingly confronts the evil Tyrone. I guess this is where I should mention that Tyrone is Jason’s puppet.

Hand to God is set in a church basement in a small town somewhere in Texas. On entering The Basement, many of  us will take one look at David P. Melton’s set design and immediately have flash backs to Vacation Bible School, otherwise known simple as VBS. There are the inspirational posters, the pictures partially colored by children, and the ubiquitous puppet stage.

In spite of the popularity of the puppet ministry in many churches, many children are terrified of puppets. My own son, in his youth, would scream at the sight of clowns, masks, mimes, and puppets. But Tyrone takes it to a whole new level. Tyrone actually opens and closes the show with his own prologue and epilogue, and in Acts 1 and 2 he demonically possesses young Jason. We’re talking bloody mutilations and violent sexual acts. We’re talking foul-mouthed verbal assaults and  blood curdling laughter. Imagination? Psychological transference? Doesn’t matter – we’re talking spine-tingling horror.

Turck switches between the mild-mannered Jason and the evil Tyrone throughout the show, which runs nearly two hours with one intermission. The rough-edged voice he uses for Tyrone as well as the shouting must wreak havoc on his vocal cords, but he doesn’t hold back. He goes full out and is the only character that really earns our sympathy. Jones Clark turns in an edgy performance as his mother, and as much as she’s obviously hurting, her actions do not generate much sympathy. One wonders what’s going on in this small town, as Margery is pursued by both Pastor Greg (Iacovo) and the foul-mouthed bully, Timmy (Adam Valentine), who reluctantly attends the puppet ministry while his mother is otherwise engaged in her AA meetings. The third young member of the puppet ministry is Jessica (Anne Michelle Forbes), a shy teen who uses her buxom female puppet to get through to Jason/Tyrone in a most surprising way in the second act.

Hopper’s direction keeps things moving, but I found some scene changes in the first act ran a little long, and while Melton’s set authentically captured VBS, it was surprisingly unsteady and had a noticeable gap in the rear wall – both of which are probably due to the need to unfold several panels to reveal the pastor’s office in the second act. The puppet theater, also designed by Melton, actually seemed much sturdier than the actual set. Joey Luck created the sound design with his usual impeccable touch, and Michael Jarett did the  lighting – which included some impressive lightning.  Heidi Rugg is credited with the puppetry, ranging from Timmy’s simple sock puppet to Jessica’s femme fatale and Jason’s two versions of Tyrone – one of which featured teeth and horns.

There is nothing delicate about Hand to God: Askins – and this well-chosen cast – tackle family dynamics, sexual issues, religious hypocrisy, and more with rawness and humor. There is no happy ending. There is no clear-cut good or bad. Major, life-changing decisions made by the characters raise more questions than they answer – all of which sounds, to me, like the elements of good theater.

One thought on “HAND TO GOD: The Invention of the Devil”