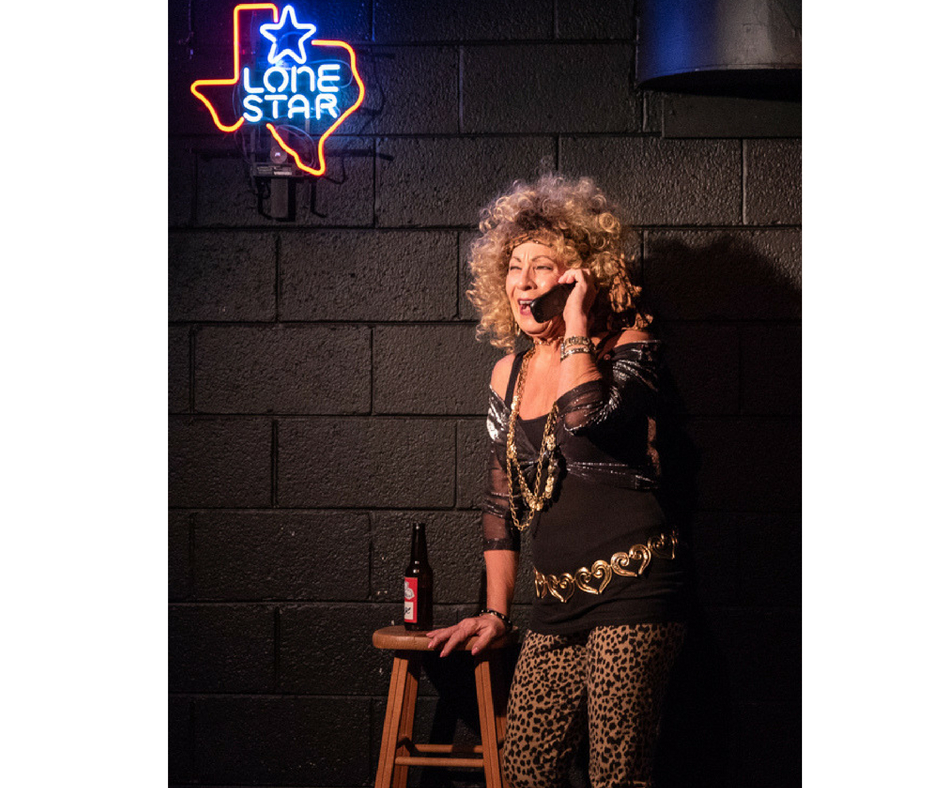 Doublewide, Texas, now onstage at CAT, is written by the same trio – Jessie Jones, Nicholas Hope, and Jamie Wooten – that created Always a Bridesmaid, which is currently running at Swift Creek Mill Theatre. True to form, Doublewide, Texas is a comedic farce, deliberately designed to be played over the top and it reaches for the broadest laughs possible.

Set in a tiny trailer park in Texas, the flimsy premise is that the trailer park is about to be annexed by the nearby town of Tugaloo, and the residents – mostly related – are banding together to fight the annexation and the accompanying high taxes. There are laughs aplenty, with plenty of puns and running gags, physical humor, and generous hints about deep dark secrets. The cast of nine is generally delightful and maintains a natural camaraderie that makes it easy and natural to laugh at even the most obvious groaners.

First up is Big Ethel Satterwhite (Catherine Cooper) who delivers a lecture on nutrition to the county inmates and parolees. The only problem is Big Ethel doesn’t believe in the program and succumbs to the temptation of a gigantic cookie, tossing a large, fresh cabbage over her shoulder, and, along with it, her job! By placing her podium on the floor in front of the stage, Big Ethel and director Michael Fletcher immediately engage the audience and draw us into the play.

Next, there’s Georgia Dean Rudd (Donna Marie Miller) who runs the local diner, Bronco Betty’s Buffeteria, where fried foods are the specialty every day.  Georgia Dean helps spearhead the  efforts to save the trailer park.  Her best friend, Joveeta Crumpler (Crystal Oakley) has vowed to fight the annexation tooth and nail – but has only a few days before escaping to a new job with a discount cruise line.

Joveeta is part of a zany and loving family that includes little brother Norwayne “Baby” Crumpler (Travis Williams), a lovable galoot who spends much of the show practicing for the womanless beauty pageant;  and their beer-guzzling mother Caprice Crumpler (Jeannie Goodyear) who is determined to break into show business as the star of a mattress commercial. She appears in a series of costumes, each more outrageous than the other, ranging from Dorothy, from The Wizard of Oz to Marilyn Monroe to Cleopatra. I guess it’s a case of like mother, like son, because “Baby” wears one crazy get-up after another, starting with high heels, then adding panty hose, and finally an oversized, white satin, fringed cowgirl getup.

Lark Barken (Christiana “CC” Kaniefski) is a breath of fresh Oregonian air as the new age child – who happens to be heavy with child. A young widow with a secret, she is new in town, as are her strange habits of chanting and burning sage. She sets up and maintains a running gag with a series of nontraditional baby names, such as Saffron and Willow. No comedy would be complete without a villain, and in this one there are two. Neighbor Haywood Sloggett (Wally Jones) can’t wait to get rid of the “trailer trash,” until the tables are turned on him. Super tall, handsome, and swaggeringly obnoxious Lomax Tanner  (Kent Slonaker) is the newcomer who proves that things are not always what they appear to be. Olivia Laskin has a small but key role as the mayor’s wife, Starla Pudney.

Michael Fletcher keeps things moving in his mainstage directorial debut, but there were a few scene changes that lagged a bit, and the pace could be a bit faster overall.  Scott Bergman’s set is authentically finished with fake wood paneling and pink curtains. There are pink flamingoes in the small flower bed out front, and there is even pink insulation peeking out of the cutaway roof, but I’m pretty sure the CAT stage is deeper than a standard doublewide. Becki Jones probably had fun designing the costumes, especially the more outrageous ones for Caprice and “Baby.” CAT often features a show-themed raffle; this time the prize is Georgia Dean’s pinkety-pink quilt, which will be awarded at the final performance. Doublewide, Texas is a hoot and a holler, but does not quite rise to the standards set by The Dixie Swim Club or The Hallelujah Girls.

One thought on “DOUBLEWIDE, TEXAS: A Hoot ‘n a Hollar”