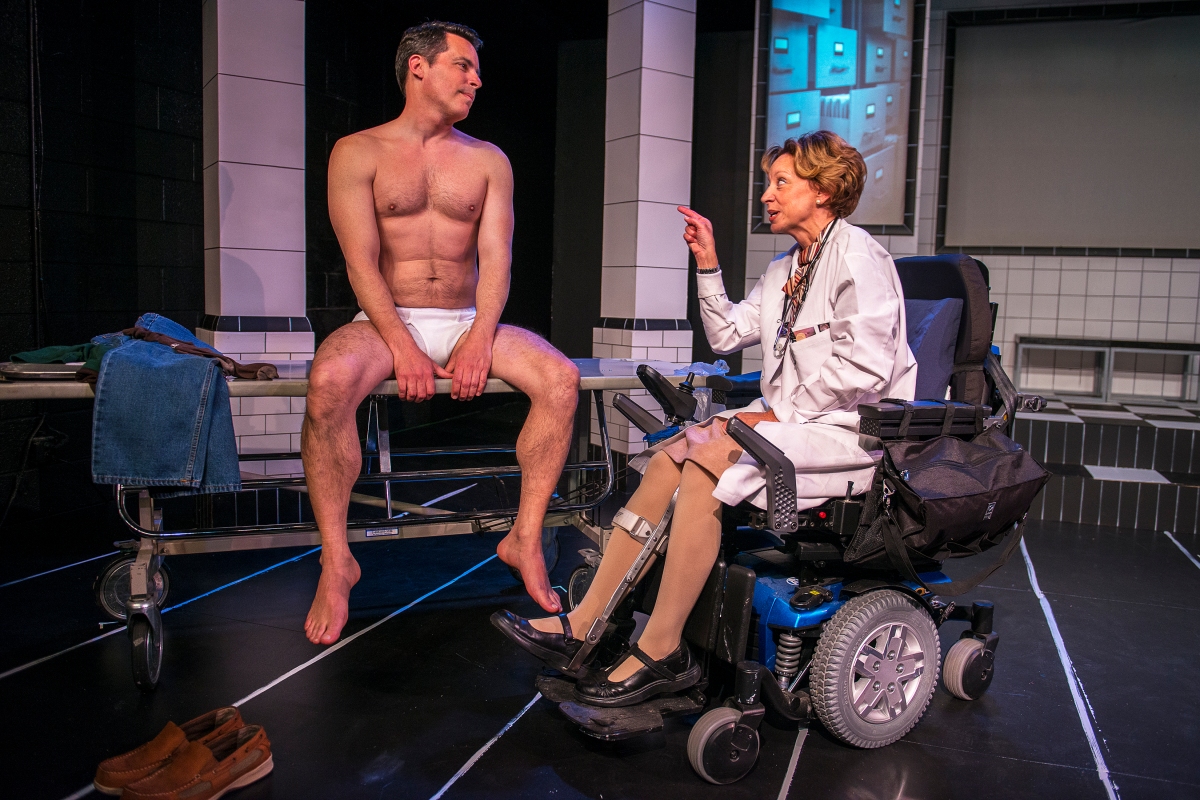 THE NORMAL HEART: The Provocative Chronicle of America’s Deadliest Plague

I usually go to the theater without reading too much – if at all – about the show I am about to see. I don’t want to be influenced by others’ opinions. In the case of The Normal Heart, which opened Thursday night at Richmond Triangle Players’ Robert B. Moss Theatre after a Wednesday night preview, I was totally unprepared for the impact – direct and personal – Larry Kramer’s play would have on me.

Playwright Larry Kramer founded the Gay Men’s Health Crisis in New York in 1981 in response to the growing and alarming AIDS epidemic. That crisis, the “plague” of the title, is the foundation of this autobiographical recounting of one of the most terrifying episodes in American health history.

This is not a play that you go to for entertainment; it made me cry and it made me recall the names of people – friends and coworkers and teachers – I had not thought of in twenty or thirty years.

Jim Morgan plays the role of Ned Weeks, the confrontational founder of a gay men’s health organization, with passion and sincerity. Weeks is, unquestionably, an annoying character – even by his own reckoning – but he is fighting for people’s lives, including the life of his own lover. Chris Hester plays the role of Bruce Niles, Ned’s polar opposite who is elected president of the fledgling organization because of his more conservative stance. There is a great deal of dramatic tension between Morgan and Hester’s characters, but as Tommy Boatwright (played by Dan Cimo) points out – both are leaders, and both are needed. Cimo’s sassy character, who has a not-so-secret crush on Ned, provides some much-needed humor, but also comes through in a pinch when a level head and a shoulder to cry on are what’s needed.

The intricacies of these interactions are a model of how all these characters interact, and the ensemble, which includes Lucian Restivo (who also did the sound and props), Dan Stackhouse, Joseph Bromfield, Stevie Rice, and Andrew Boothby – some alternating in several roles – is a tight and well-oiled machine under the direction of George Boyd. Dawn A. Westbrook, shares the stage with this thoroughly satisfying cast as Dr. Emma Brookner, the first medical professional dedicated to HIV/AIDS research. Westbrook performs most of her scenes in an electric wheelchair as the doctor, a polio survivor, was figuratively and literally hell on wheels in her hunger to get to the bottom of this new virus.

Set in New York City between 1981-1984, The Normal Heart, chronicles the early history of the HIV/AIDS crisis with near clinical meticulousness, but it also deals clearly and authentically with the toll it takes on family relationships and friendships, the economics and politics of sex and health, fear and the screeching halt it brought to the freedom of the sexual revolution. We were only a few minutes into the first act when I realized that this was the real deal.

I remembered sitting with members of the Gay Men’s Health Crisis in a board room at the Joyce theater planning a fund raiser. I suddenly thought of Nick, the music teacher in the public school where I taught. When he began to grow weak and tired, the students would rub his back and shoulders to make him feel better. I thought of the countless dancers I knew, some friends, some teachers. There was Al, whose friends knitted him scarves because he was always cold. There was my good friend Larry, an ardent arts supporter with whom I shared many trips to the theater, who refused to name the sickness that took him away from us so soon.

When I wrote a young adult book on the legendary choreography Alvin Ailey, my publisher required that I say he died of a “blood disorder.”  My mother, a nurse’s aide at Bellevue Hospital for more than three decades, took special training to work with HIV/AIDS patients. When she went into the break room, other aides and nurses would get up and leave because they were afraid to be near her.

Everyone was afraid then. That comes across in The Normal Heart in palpable ways. Friends turn against one another.  Dan Stackhouse, as Mickey, has an epic melt-down I the second act. Ned is pushed out of the organization he started.

The Normal Heart is not theater as usual; it should be seen, but not alone. The opening night audience cried real tears. This is moving theater. This is real life. As the audience left, ushers handed us copies of a letter from Larry Kramer, dated July 2011, that reminded us that these things really happened to real people, and much as it hurts, and as ugly as it gets, we need to remember so we will remember to act.

As for the technical elements: On opening night there were a few mysterious bumps and bangs from backstage and I was occasionally blinded by the glare of the light bulb behind the screen on which the timeline of the epidemic was projected.  Frank Foster’s scenic design, with its black and white tiles and red chairs, was something of a mashup of a New York City subway, a hospital, a gym, and what I imagine the infamous gay bathhouses must have looked like. Michael Jarett designed the lights and projections. Sheila Russ and Joel Furtick did well with the costumes and hair and make-up, respectively.

One thought on “THE NORMAL HEART: The Provocative Chronicle of America’s Deadliest Plague”