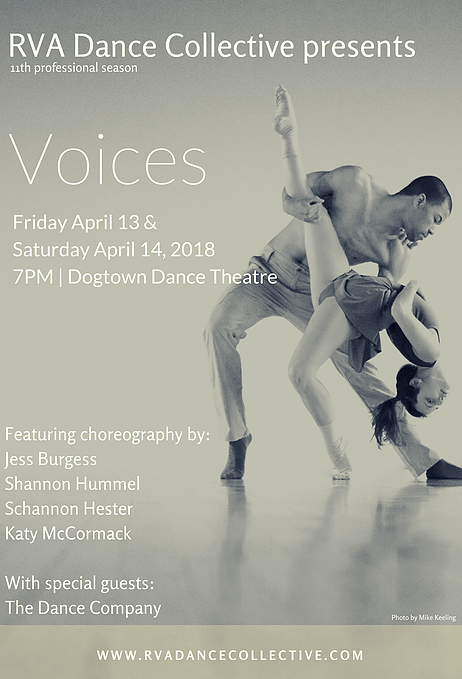 [NOTE: Due to out-of-town obligations, I could not attend the weekend performance of RVA Dance Collective, so before leaving, I attended part of the dress rehearsal on Thursday, April 12.]

It wasn’t until I spoke with Artistic Director Jess Burgess that I realized the dancers in Mondrian in Frame were all students – specifically, advanced students from The Dance Company in Mechanicsville. The eight dancers were dressed in solid red, blue, or black attire that can best be described as classic swimsuits which seemed appropriate since their movements, while intentionally not all in unison all the time, reminded me of a synchronized swim team. Athletics, gymnastics, and competition all came to mind fleetingly as the dancers performed a series of lifts and splits and standing stretches punctuated by cartwheels and body rolls. At one point some dancers would crouch as if spotting the others, and in the midst of the piece they formed a classic chorus line formation and created a wave or ripple effect, further reinforcing the swimming reference. But then there were the three larger-than-life-sized frames they moved around the stage and moved in, around, and through, as if to prove to us that dance is, indeed a three-dimensional art form.

Lloverá, also choreographed by Burgess, is a duet for Jasmine Tubach and Desmin Taylor (the company’s only male dancer). Mostly romantic, the physicality of the piece is driven in part by the physical shape of the choreography but equally by the disparity in size of the two dancers: Tubach is quite petite, and Taylor is very tall. This physical opposition is mirrored in the give and take, the tension of the movement and the feelings that flash across the dancers’ faces and lingers in their touches, Memorable moments include a section where she lies spooned atop her partner, and he cups her head and turns it in sync with his own, and later he rests lightly atop her, his head cradled in the curve of her torso. She runs and he follows. But there were also odd moments, as when Taylor spins Tubach around, holding her by her knees while her head is mere inches from the floor, and later when he drags her across the stage. The two seem suspended in time, but at the end she walks away with a gentle but firm gesture, as if to say, stop, stay. The dancers’ lines are mostly classic, almost balletic, but the shapes are designed, Burgess said, to mimic the shape of rain drops. Lloverá is Spanish for “it’s gonna rain.”

The final piece, Continuum, is a group work, also by Burgess, that has the dancers moving downstage on a diagonal, emerging from a cloud of smoke or fog. Some run, some walk slowly, but all pass, occasionally interacting with, a hooded figure who starts out lying on the floor.  As the dance progresses, the eye is caught by the variety of interactions – or distractions. Some fall, some lift others in a fireman’s carry, some nearly step on the prone figure, passing by seemingly without looking, and occasionally a dancer or two or three will whip out a lightning fast turn in the air. But without exception, as all move out of the cloud, they seem determined to return the one dancer to the darkness; at the end, hood thrown back, she is the only one left standing.

The program also includes two additional works by Burgess: a restaging of her trio, To Care (Like You) and a solo, Fractured Light, in which dancer Carrie Moore dances with her own shadow. There is also a work by Brooklyn-based choreographer Shannon Hummel (Cora Dance) – a full company work called In Passing; as well as Heartbeat, a solo by Schannon Hester (Pole Pressure) who competed in the world pole competition in Greece in the fall of 2017; a work by company member Katy McCormack, Fear of Being; and a new work commissioned from Richmond-based choreographer LaWanda Raines, Trilogy of Womanhood.

During the dress rehearsal, I was able to see each work twice, which presented a rare opportunity not available during a performance to re-see movement, and to discover or consider nuances that were not apparent or missed the first time. The dancers’ energy and attitude, the costuming, the lights, music, even the fog – which, on the final take, set off a fire alarm – all showed growth and artistic development even over a short period of time. Jess Burgess is Co-Artistic Director and Founder of RVA Dance Collective along with Danica Kalemdaroglu, and with this program, “Voices,” the company seems to be reaching for new inspiration and challenging the dancers and choreographers to be more and do more.