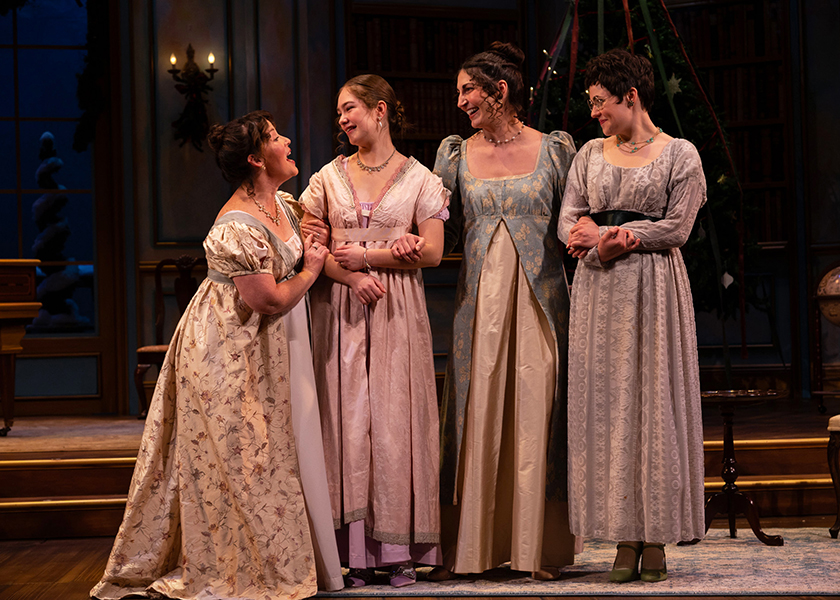 After Pride and Prejudice, The Sequel

MISS BENNET: CHRISTMAS AT PEMBERLEY is like a Hallmark Christmas movie that came to life on stage: amusing, heartwarming, romantic, and predictable. The focus of Lauren Gunderson and Margot Melcon’s 2016 play is Miss Mary Bennet, the middle sister from Jane Austen’s Pride and Prejudice (1813). The bookish Miss Bennet, who is fast approaching the dreaded season of spinsterhood, accepts an invitation to spend Christmas with her happily married older sister, Elizabeth, and her husband Fitzwilliam Darcy at their estate – Pemberley.

Naturally, a single man, Lord Arthur de Bourgh, is also invited and to no one’s surprise, de Bourgh turns out to be a perfect match for Mary. Shy and socially awkward, de Bourgh reminds me of a Regency-era Sheldon Cooper (of The Big Bang Theory). The two love-nerds bond over books, maps, and wordplay – a perfect meeting of two sapiosexual minds. (Yes, there really is a word that describes people who are sexually attracted to intelligence, and this is the first time I actually had a chance to use it.)

In addition to being a matchmaker, Elizabeth also happens to be a trendsetter. The German custom of displaying Christmas trees inside one’s home was introduced in England sometime in the first half of the 19th century. That makes Elizabeth’s holiday tree something of an oddity and the subject of a running joke throughout Christmas at Pemberley. Act I ends with a Christmas tree bare of decorations except for half a dozen paper stars, but Act II opens with a fully decorated tree – part of the Christmas magic. Act I also closes with a cliff-hanger – a mystery fiancée.

The cast is populated with a number of actors making their Va-Rep debut, as well as a number of performers who are current VCU theatre students or recent graduates of the department where Christmas at Pemberley director Sharon Ott serves as an Associate Professor and the department’s Artistic Director. The show moves along at a relaxed pace, giving the characters ample opportunity to unfold and reveal various facets of their personalities. Given that this is a shamelessly feel-good story, there isn’t much to reveal. The four sisters (the happily married Elizabeth and Jane, the less-happily married Lydia, and our leading lady, Mary) bicker relentlessly, but by the end declare their love for one another. The youngest sister, Kitty, is mentioned, but never makes an appearance – arriving with her parents (all offstage) in the final scene.

There are a few amusingly awkward scenes between the men as well. Mr. Darcy and his brother-in-law Charles Bingley sit in awkward silence, but when Bingley attempts to initiate conversation, it quickly becomes apparent that conversation is even more awkward than silence. Darcy returns to his book, and Bingley resumes staring into space. However, both muster themselves from their introversion to give advice to de Bourgh. Britt Michael Gordon (Darcy), Cameron Nickel (Bingley), and Lukas D’Errico (de Bourgh) embrace their roles, hiding behind manners and protocol, and clothed in stylish Regency attire.

The four sisters are the main attraction. There is a very pregnant Jane Bingley (Patricia Austin), the annoyingly unhappy Lydia Wickham (Naomi Bertha), the wise and conciliatory Elizabeth Darcy (Ally Farzetta, who is Gordon’s real-life wife), and the still single but ready to mingle Mary Bennet (Emily Franch). They trace the patterns of a dance choreographed with equal parts hilarity and love. Sometimes their interactions are heavy-handed and sometimes quite delicate, establishing a balance that kept the Saturday afternoon audience engaged and amused.

Oh, and let’s not forget the surprise fiancée, Ann de Bourgh (Tatjana Shields), the twice-scorned bride-to-be. I found Shields delightful as Mrs. Dickson in a VCU production of Intimate Apparel, another period piece, but her character was overbearing and off-putting in Pemberton. This was an unfortunate manifestation of her character – which was apparently written that way – as there was no opportunity for her to redeem herself and win over the audience. The estate was kept in order by a nameless Maid, a thankless – and silent – supporting role played alternately by Nicole Boisseau and Emma Tolley.

Kudos to Carolan Corcoran for the luscious costumes, although I did wonder why the women were usually in sleeveless dresses in England in the winter – with snow falling outside the window. Hmm. Ah well, it’s fiction, it’s fun, and a good time was had by all.

By Lauren Gunderson and Margot Melcon

Virginia Rep encourages wearing masks for our patrons’ safety, but we do not require that you wear a mask in our lobbies or within the theatres. They are now optional.

We continue to follow CDC guidelines and local risk levels. All Virginia Rep staff will continue to wear masks while serving you.

Your contribution is greatly appreciated.