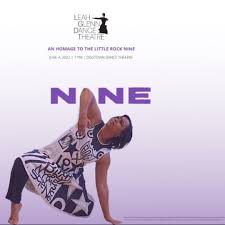 An Homage to the Little Rock Nine & Eight Other Dances

In June 2021 I attended “The Making of Nine” at Dogtown Dance Theatre. An artist’s talk with choreographer Leah Glenn, visual artist Steve Prince, poet Dr. Hermine Pinson, and historian Dr. Jamel Donner, “The Making of Nine” offered a fascinating insight into the creative process and historical background of a multi-media work-in-progress that celebrates the nine African-American students who integrated Little Rock Central High School in Arkansas in 1957.

Nine was co-commissioned by the Carver Community Cultural Center in San Antonio, TX, in partnership with Xavier University and the National Performance Network’s Creation and Development Fund and the show premiered Saturday, May 28 at the Carver. When I learned that the finished work – or at least the latest iteration of this dynamic and developing work – would be presented for only one performance at Dogtown on June 4 I rearranged my schedule to make sure I did not miss it. The previous year’s artists’ talk had impressed me that this was a work that needed to be seen.

The closing work on a program of nine works, Nine is a fusion of dance, poetry, music, visual arts (in set design, costumes, props, and associated prints), and history that reflects on the institutions of racism, education, and American society.

Nine begins with a humming, a moan, a procession of nine dancers and eight larger-than-life sized banners (the ninth banner appears after a significant solo) each featuring a stylized portrait of one of the nine. The dancers are clad in Prince’s beautiful black and white costumes (apparently hand-painted), each marked somewhere with the letters AOG on a small shield, and some are adorned with adinkra symbols. The AOG is a reference to Paul’s letter to the Ephesians, a reminder to put on the whole Armor of God – something that was necessary to protect the nine young scholars in their hostile educational and social environment. The adinkra symbols include the bird that faces forward while looking back – a reminder to “go back and get it” or learn from the past. The symbols are a visual representation of ancestral wisdom and traditional proverbs. In contrast, the costumes of the dancers representing the white students bear anti-black slogans (two, four, six, eight, we don’t want to integrate) and anti-Semitic symbols (swastikas).

The movement begins with the cadence of a work song, also an appropriate historical reference, as is the hand-clapping and thigh-slapping that serves as both accompaniment and choreography – a reference to the hambone or patting juba that developed during a time when drums were confiscated from African people in the Americans to prevent them from communicating with one another. Wow – all of this, and the dance has barely started. Nine is rich in historic references, and the integration of the multi-media elements is so multi-layered it cannot be comprehended in a single viewing. Nine is, in a way, a compact mini-series of the history of this specific group of young people at a specific point in time (1957) in a specific geographic location (Little Rock, AR).

Video footage from The History Makers archive provides some important historical background, but this is a work that I believe needs extensive program notes, or better yet, a pre-show introduction followed by a post-show discussion. It’s far too important to be treated as simply a dance, and far to complex to be denied the formality of community.

The program also included the urban Aloft, in which dancers run and balance to a background of traffic sounds and a rapid-fire Spanish-language speaker, sometimes assuming protective postures and other times appearing to teeter on a tightrope. There was the percussive and ritualistic Fault Lines, a jazz trio set to the music of Trombone Shorty called From the Corners of the Room, and Claiming Race, an encounter between two briefcase carrying men wearing suits and ties. Hush, which I believe was inspired by Glenn’s son, is a powerfully intense work that features a mourner’s bench and the soulful music of Sweet Honey in the Rock. Letter to the Editor, is based on an actual event in which Glenn’s father, head of one of the few Black families in the town where he resided, wrote a letter to the editor of the local newspaper in response to the locality’s resistance to integration. I am not sure what Glenn was thinking of when she created Furious Flowers but what I saw was a form of death that was in reality a planting, followed by a rebirth representing growth and hope, and I wish I had a bit of background for the duet Perceived Threat. The melancholy music, water sounds, and whispering, and the sudden and mysterious appearance of the male dancer’s partner from behind (or inside?) the box he was sitting on made me wonder exactly what – or who – the threat was.

The entire program offered plenty of food for thought. The closing image, of nine school desks lined up, the writing arms covered with portraits of the actual Little Rock students – was a stark reminder that we are still connected to the past, and hiding or re-writing history does not make it go away.

Your contribution to support RVArt Review is appreciated.