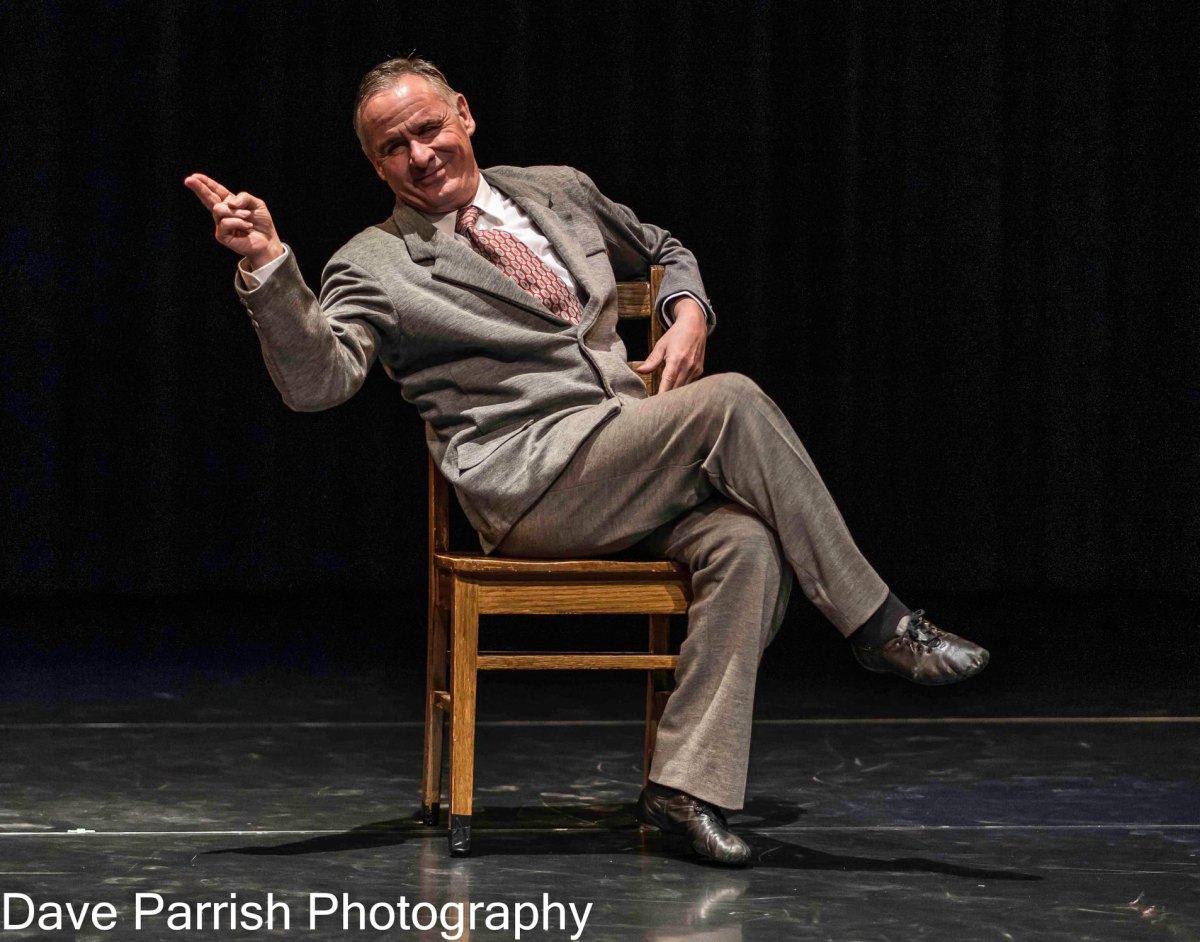 Five Men, Six Dances:  A Concert of Solos by the Rebel of Modern Dance

Ticket Prices: $20 General; $15 for Students (no tickets sold at the door as part of COVID-19 precautions).

I love watching the look on my undergraduate dance history students’ faces when I show them videos of dancers I watched and loved when I was their age — more than four decades ago. One that usually gets their attention is a video of solo dance artist Daniel Nagrin performing his signature work, “Strange Hero.” Created in 1948, the work is a caricature of and homage to the American gangster.

“Strange Hero” was the opening work of the Daniel Nagrin Celebration Concert at Dogtown Dance Theatre last weekend. Matt Pardo, an assistant professor of dance at James Madison University, performed the piece, dressed in all black, minus the tight-fitting, broad-shouldered blazer Nagrin often wore when performing it. Pardo seemed less menacing than I remember, but at the same time seemed to exhibit more technical control than Nagrin – if that is even physically possible. The dangling cigarette (unlit), the hand that mimics a gun, the syncopated stabbing motions, and the juxtaposition of smooth, sharp, and elongated movement phrases may be employed in reconstructing a dated stereotype but the solo is as compelling now as 73 years ago. “Strange Hero,” is, like many of Nagrin’s solo works, a deeply reflective character study that explores the human condition, and much, perhaps all, of his work reflects a love of rhythm, jazz music, and jazz dance. “Strange Hero” features music by Stan Keaton and Pete Rugolo, while “Man of Action” has music by John McCoy and Count Basie.

“Man of Action,” another work created in 1948, was performed by Shane O’Hara.  A professor of dance at JMU, O’Hara has worked closely with the Daniel Nagrin Foundation and has an intimate knowledge of Nagrin’s work. Dressed in a shirt, tie, slacks, dress shoes, overcoat, and hat, O’Hara adeptly demonstrated the humor and drama of Nagrin’s artistic vision. The work mines the simple beauty of walking, running, leaping, and skipping, but suddenly the dancer is suspended in the air, and you’re not sure how he got there. There is even a delightful resurrection of that old trick where someone pretends to walk down invisible stairs.

On a side note, O’Hara brought the Virginia Repertory Dance Company, a pre-professional ensemble made up of select JMU dance majors, to Dogtown a little more than a year ago. They were the last live company to perform there before the big shutdown. How appropriate that O’Hara would be instrumental in Dogtown’s return to live performances.

Another of Nagrin’s popular dances, “Spanish Dance” (1948), a nod to Flamenco, was performed by Donald Laney, a faculty member in the Department of Theatre and Dance at Western Illinois University and dance instructor at WV Governor’s School for the Arts. Chest thrust forward, arms lifted, Laney embodied the controlled power of the Flamenco dancer, in a black tank top and bare feet. Laney was the last dancer to learn “Spanish Dance” from Nagrin, who died in 2008 at age 91 after half a century in dance.

The second half of the program included some works that were new to me. Paul Dennis, a graduate of the Juilliard School and a former member of the José Limón Dance Company, performed “Indeterminate Figure” (1957). One of Nagrin’s works from that decade dedicated to finding self, “Indeterminate Figure” is filled with ambiguity and juxtaposition. For starters, the dancer wears a pair of silky pajamas that resemble military fatigues, and the sound score is filled with a variety of sounds from rain to exploding bombs, from footsteps to the sounds of a beating heart. The soloist sometimes dances gracefully with an invisible partner, sometimes moves as if scrambling to safety from the effects of a crumbling foundation. Nagrin’s evolving signature style is evident in the dance’s gestures and the use of core strength that smoothly lifts the dancer from a kneeling position and seamlessly returns him, all without using his hands.

On an interesting side note, I came across a contract housed in the Library of Congress that is signed by Bill T. Jones, but not Nagrin, granting Jones performing rights to this solo. Mysteriously, two conditions of this contract state that “the dancer will never divulge the inner meaning(s) of Path as confidentially represented to him by the Choreographer to anyone,” and “the Dancer will never divulge his personal thinking as to the meaning(s) of Path to anyone.” I don’t know whether Nagrin ever signed this contract, but Jones has choreographed several works for the Daniel Nagrin Dance Theater.

The Celebration concert closed with “Wordgame: A Cartoon” (1968), also performed by O’Hara, with a sound design by Nagrin. Created from the full-evening work “Peloponnesian War,” about the conflict between Sparta and Athens, “Wordgame” was made as a commentary on the Vietnam War. Dressed in a shirt, tie, and light gray suit, the dancer tosses cash and moves with passive-aggressive disdain against a background peppered with unintelligible text, dramatic organ chords, and pinball noises. As with many of his solos, the interpretation is left open to the viewer, but social commentary was not unique to Nagrin. He was married to and collaborated with Helen Tamaris, who was also known for her American-themed solo works, many of which addressed social issues like racism and war.

What a wonderful opportunity, a unique marriage of history and artistry, all in one neat hour-long package. It was both interesting and fulfilling to see a variety of male dancers – black, white, different ages, different sizes – performing these iconic works.