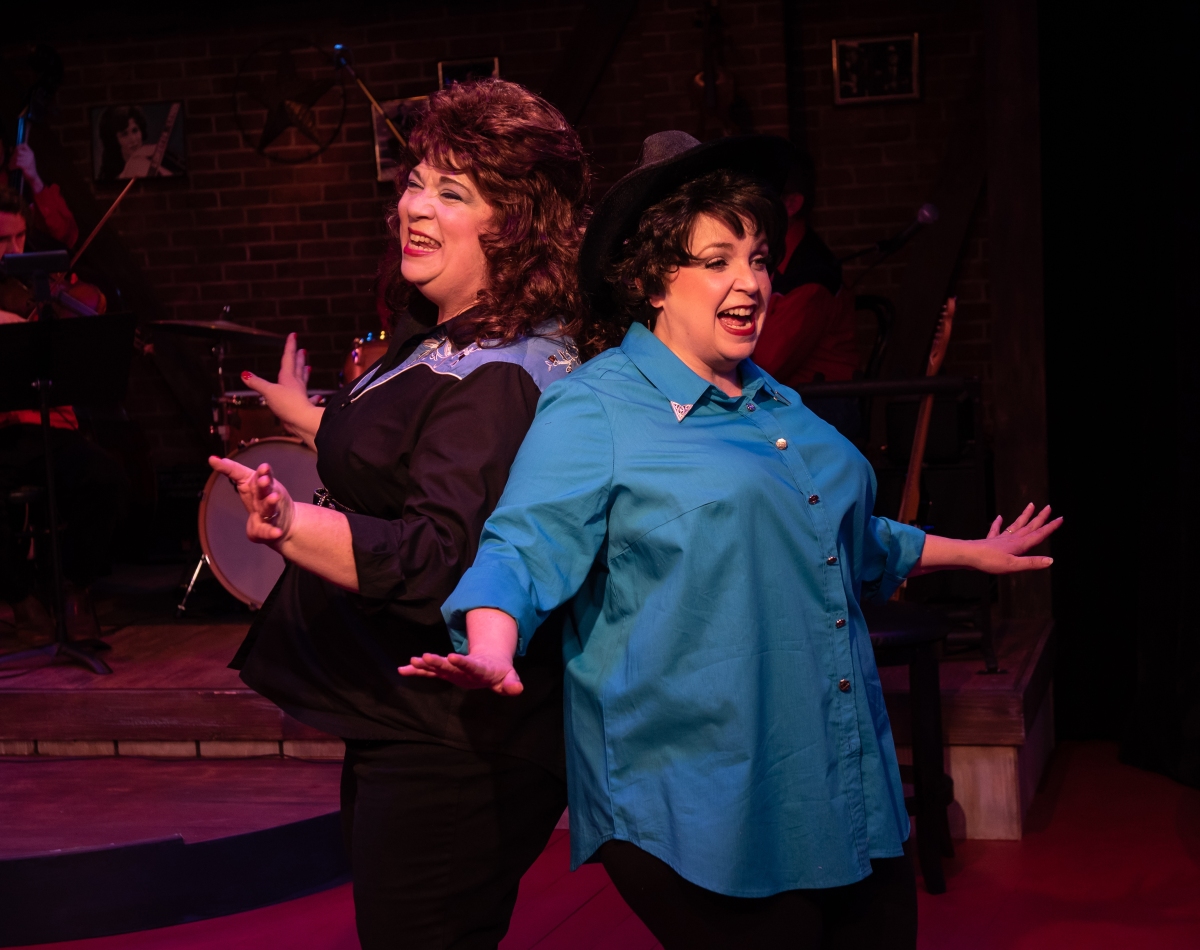 ALWAYS. . .PATSY CLINE: Come on In (And Sit Right Down)

Always. . .Patsy Cline is a two-person show that pays homage to a legendary country music icon. Born in Winchester, VA, Cline died in a plane crash in 1963 while on the way home from performing a show in Missouri. She was only 30 years old at the time of her death, but she had been performing since the age of 14 and left a lasting impression as one of the first country music artists to cross over into the pop music world. Cline made other inroads in music history as a woman in country music, but that’s not the main point of Ted Swindley’s fact-based play, Always. . .Patsy Cline.

You don’t need to know anything about Cline or even be a fan of country music to enjoy this play filled with the music of Cline as sung by the more-than-capable Debra Wagoner. Wagoner’s excellent singing is perfectly balanced by the comedic narration of Terri More as Cline’s friend and number one fan, Louise Seger. This isn’t the first time either woman has played these roles, having performed the show at Hanover Tavern and Willow Lawn in 2012. Then as now, the seemingly effortless flow of the show – which is like a Cline concert interrupted by  Louise’s flashbacks – was directed by Joe Pabst.

A five-piece band, consisting of piano, bass, fiddle, drums, and guitar, remains onstage. Near the end of the first act Wagoner, as Cline, takes a break to introduce the band – giving them the stereotypical countrified names Jim Bob, Joe Bob, Jay Bob, Billy Bob, and of course, Bob who collectively make up – what else? – the Bodacious Bobcats. Jeff Lindquist, who plays guitar in the band, is also the show’s musical director.

Wagoner has several comedic moments and spends a lot of time looking incredulously at Moore, who’s comic shenanigans are epic. The phrase, “bless her heart,” was uttered at least once. Moore has some memorable moves, including her enthusiastically receive bump-and-grind walk and her miming of driving her character’s pink and black Pontiac, lovingly named Sexy Dude. Moore has great timing and flawlessly delivers her over-the-top lines. Cline’s friend raised fan-dom to new heights, spontaneously introducing herself to Cline and then portraying herself as Cline’s manager to get her a better rate at a club. She feeds her, chauffeurs her, listens to her, and incredulously connects woman-to-woman creating a friendship that lasted until Cline’s untimely death.

This is the story that Swindley has captured in a two-hour, two-act play – Louise’s loving memory of her friend, not just the star, but the woman, the mother, the wife. Along the way, Moore gets to sing a measure or two as well, as her character joins Cline on stage, hypes up the audience, leads the audience in a sing-along, and cajoles an audience member into dancing with her. Moore’s storytelling is so natural that we hang on her every word. She even chides the audience for not finishing her sentence after using a particular phrase repeatedly.

Derek Dumais’ sound design is impeccable. We can understand every word Wagoner croons. Special effects are used sparingly. Terrie Powers’ scenic design is understated. One side of the space is a honky tonk stage, the other holds a revolving platform that houses Louise’s kitchen, the audience’s area of the honky tonk, and an outer room of a radio station. But what I really loved were Wagoner’s dresses; she wore at least three beautiful, elegant dresses, and my daughter and I both gushed when, at one point, she fumbled around a bit and then thrust her hands into the pockets of her full-skirted dress.

You don’t have to love country music or know the music of Patsy Cline to enjoy this show. Wagoner demonstrated a range, in vocal ability and in genre, worthy of the woman she portrayed. With nearly 30 songs, there’s more than enough to please everyone at least some of the time. I especially enjoyed familiar tunes like “Back in Baby’s Arms,” “Your Cheatin’ Heart,” “Shake, Rattle and Roll,” and “Bill Bailey.” She also sang traditional songs of faith like “Just a Closer Walk” and “How Great Thou Art,” and a lullaby for Louise’s young son. There were love songs, torch songs, ballads, and upbeat songs, including “Walkin’ After Midnight,” “Stupid Cupid,” and “Crazy.”

Despite its somewhat sad ending – it’s not a spoiler to write that Cline dies at the end, because all who are familiar with her know this going in – Always. . .Patsy Cline (a phrase taken from the tag line of Cline’s letters to her friend) is a feel-good play, filled with good humor and even better music.

One thought on “ALWAYS. . .PATSY CLINE: A “Honky Tonk Merry Go Round” of “Sweet Dreams” and “Faded Love””