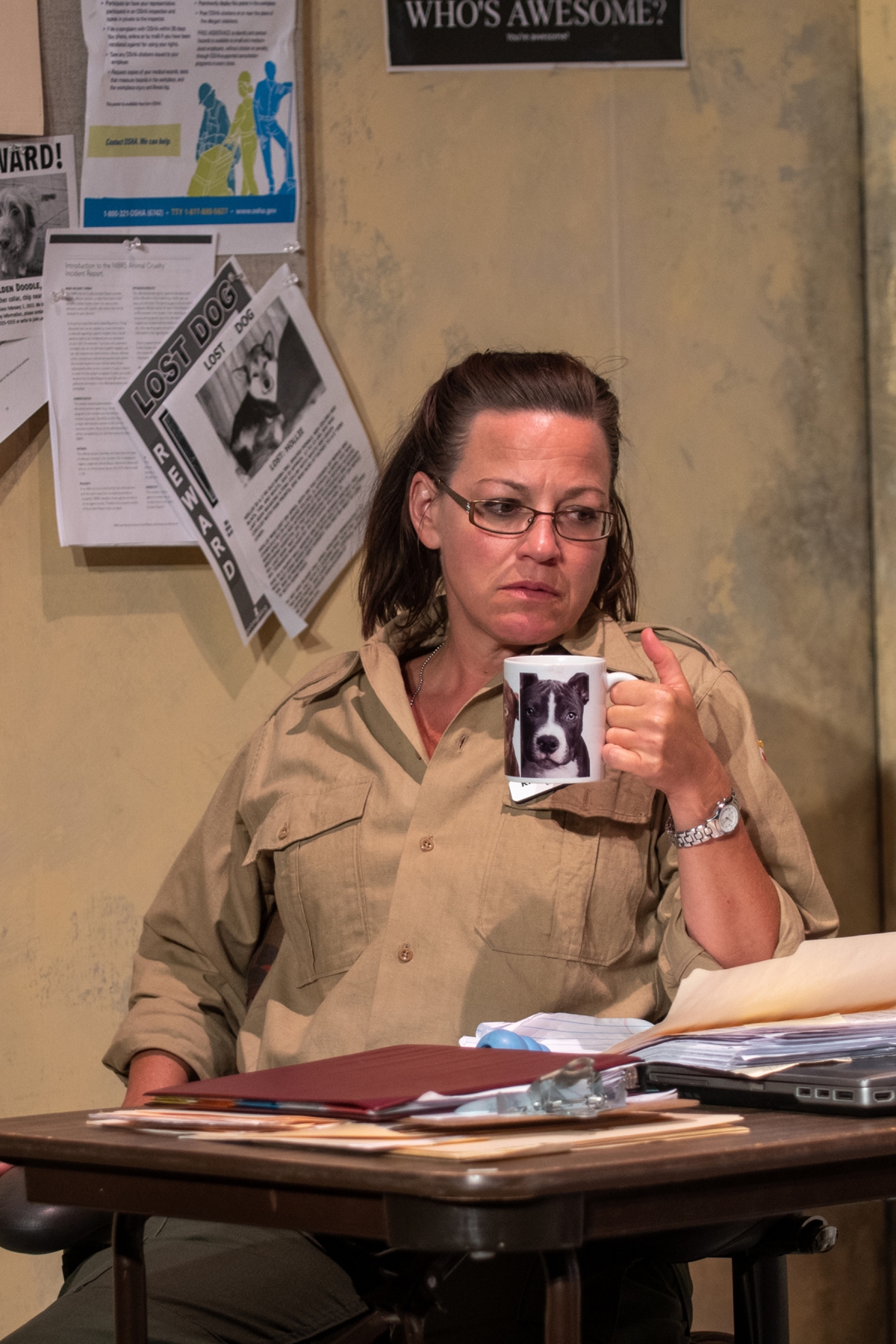 About three months ago I wrote about the world premiere of Chandler Hubbard’s new play, Animal Control. It may be unusual, but here we are again. The Firehouse Theatre’s summer offering is a re-working of Hubbard’s play, with two new cast members, and director Joel Bassin, Producing Artistic Director of the Firehouse Theatre, jokingly and lovingly referred to this production as a revised world premiere.

[For my April 21 review of the original world premiere, visit

For this production, Chandler’s original three acts or scenes – The Prosecution, The Defense, and The Verdict – have been somewhat condensed. The combined effects of the script changes and the chemistry of the new cast has led to a leaner, tighter production, with greater dramatic intensity. It still evokes a strong sense of compassion, and it still brings tears to the eyes of pet owners and animal lovers, but it also seems to focus more on the development of character Kim Hawkins, the newly appointed manager of the Carson County Pound, so that she seems less incompetent and more a victim of a series of unfortunate circumstances leading to the tragic culmination.

Donna Marie Miller still plays the role of Kim Hawkins and appears to have honed it to a masterful depiction of a caring woman who is tested by the unmitigating stresses and pressures of a dysfunctional bureaucracy. Similarly, Adam Turck has returned to play the role of the somewhat neurotic Marc Hanson, owner of Winnie (short for Winston, as in Churchill), the dog who was attacked by Bailey, the three-legged bully of the dog park. Turck has tweaked Marc’s characteristics, making him at once more focused and more distracted. As an example of the former, he sits with his body squarely facing the audience but his head is turned perpendicular to his body, zoned in on Hawkins; as for the latter, he seemed to take extra care to make sure we noticed his need to place a fork in the sink, cover a lunch container and put in into the mini-fridge, or examine the canine graphics on Hawkins’ coffee mug.

Young Journey Entzminger (a junior business management major at VCU) also returned as the intractable office assistant, Corrine Lowell. I would not have believed it possible but Entzminger was even sassier than before while somehow managing to steal hearts and nearly steal the show whenever she appears onstage – or even while making outrageous exits.

New to this cast are Stevie Rice as Dan Stanley, a role previously played by the 6’7” Arik Cullen, and Margarette Joyner as Patty Smith, a role previously portrayed by Lucretia Marie Anderson. When I first heard that Rice would be playing the role of Stanley I couldn’t image anyone other than Cullen whose mere presence was intimidating. But I quickly grew to admire the versatile Rice in the role. He was nearly unrecognizable as himself, hidden behind a baseball cap and a denim vest, both emblazoned with confederate flags. As much as you despise him at the beginning, you can’t help but feel compassion for him in the final scene, where even the irreverent Corrine feels compelled to gently brush back his hair while declaring the final words of the play, “he was a good dog.”

Last but not least, Joyner brought a more militant, more forceful interpretation to the role of Patty Smith, the beleaguered neighbor whose frequent complaints about Bailey were both cause and effect of the plot twists leading to the scene three denouement.

Much as I enjoyed the original production and cast, it is clear that Bassin, Chandler, and this cast have worked hard to solve problems and issues –both perceived and imperceptible – with the original. The result is, indeed, a better, more compact, more intense play.

BTW, when I walked into The Firehouse, Bassin was quick to explain his concept for the set, because in the original production, I wrote, I was distracted by the set with its chain link fences on either end. Bassin’s aesthetic leans towards the unrefined, minimalist look, while my OCD tendencies prefer things more refined and polished. But, point made and taken, it’s an aesthetic choice, and does not interfere with the average person’s ability to enjoy the production.

Animal Control is a surprising play in many ways. It presents many sides of a story, demonstrating how difficult it is to judge others. It makes subtle parallels between the behavior of people (Corrine, the student worker, who was been, in a way, rescued from juvenile detention) and animals (Bailey, a former bait dog abused by breeders of fighting dogs). And mostly it reminds us that even the most unlikely person may be deserving of compassion.

One thought on “ANIMAL CONTROL: THE SECOND WORLD PREMIERE”