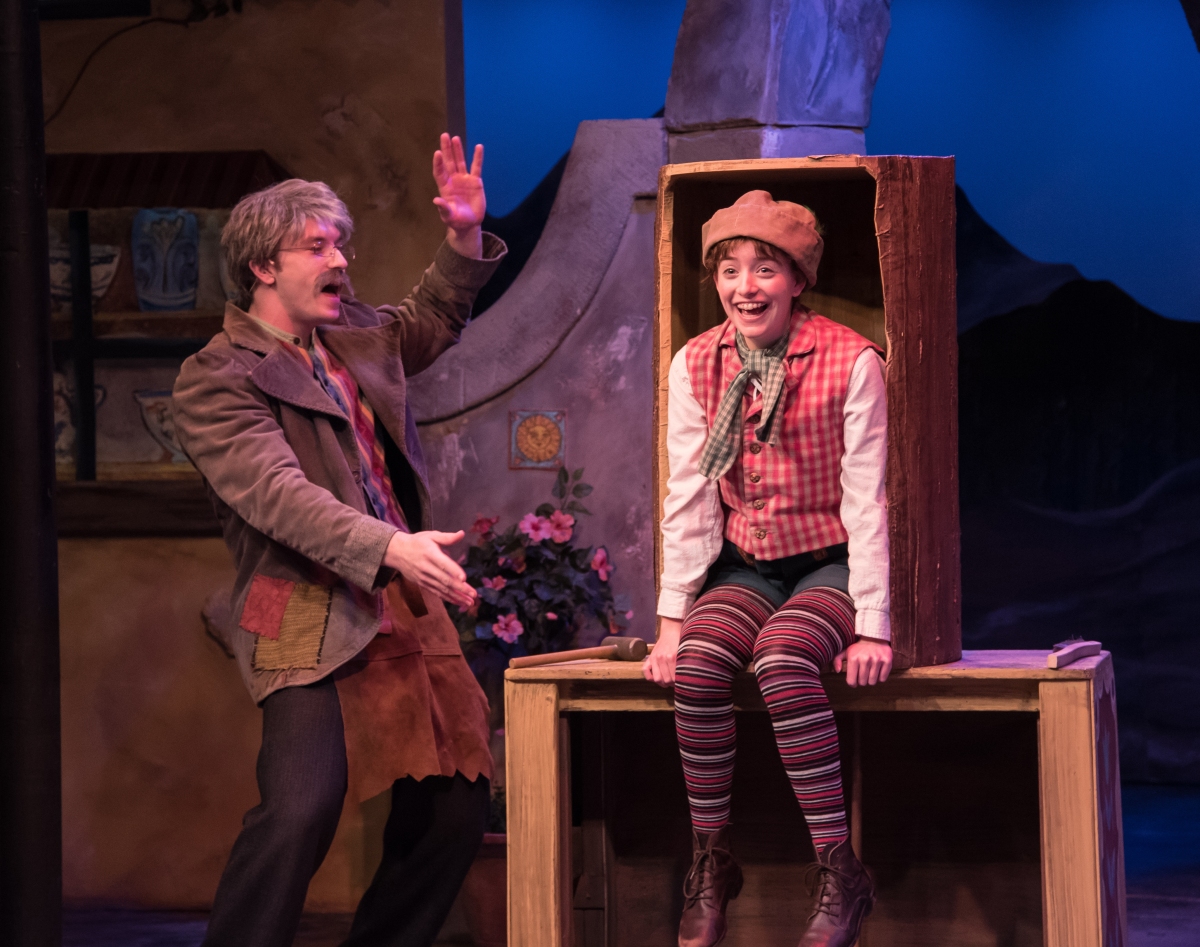 A Theater Review by Julinda D. Lewis (with input from Emmitt, Kingston & Soleil)

The third production of the Virginia Rep Children’s season at Willow Lawn is the children’s classic Pinocchio. I’m glad I usually take children with me to these shows, because our perspectives are often vastly different.

First, a disclaimer. I am truly glad that Pinocchio is played by a real person, Bridget Sindelar, who last appeared on this stage as Ginny/Little Blue in The Little Engine That Could. I find articulated marionettes creepy – almost as creepy as ventriloquist dummies. Sindelar adopted a herky jerky walk, like a windup toy about to wind down, with uplifted elbows to mimic the posture of a marionette.

Sunday afternoon found a nearly full house for this show, with book, lyrics, and direction by Bruce Craig Miller, who will soon start his new job as head of the Chesterfield Cultural Arts Foundation. Running a little under one hour with no intermission, Pinocchio is recommended for ages 4 and up, and that seems about right. There were a few criers in the audience, but most of the young attendees were enthralled. My 4-year-old grandson Emmitt was fully attentive. As always, he is especially fond of the musical numbers. His favorite was “The Eating Song.”

When asked which characters he liked the most, his first response was the Blue Fairy (played by Renee McGowan) but then he changed it to Pinocchio. He also did not hesitate to let his mom know that he did not like the scene where Pinocchio got tied up with a noose. (It might have been around that time that he moved from his seat to her lap.) The set, by Terrie Powers, also caught his attention, “It looks like a real city,” he said in unsolicited awe shortly after we took our seats.

Kingston, at 10, is the more seasoned theater-goer, but he liked the entire show, especially Tevin Davis as the Fox and Eve Marie Tuck as the Cat. He did not have any problem with the rope scene or even with what I saw as totally improbable, illogical, and unsubstantiated scenes and events. Their mom, Soleil, who between the ages of 7-17 spent more time on stages than in theater seats, acknowledged the inconsistencies, but was most struck that this version of Pinocchio reminded her of the book of classic fairy tales her father and I had bought for her and her siblings. One scene she reminisced about was the scene where Pinocchio and his father Geppetto are reunit4ed in the belly of a giant dogfish – a scenario I did not remember at all. So, thank you, family, for your input. I appreciate your perspectives, but do not fully agree.

From my perspective, I found Bridget Sindelar charming as Pinocchio, but I was repelled by Pinocchio’s bratty behavior. I, too, was enamored of Tevin Davis’s Fox, a rakish character who seemed to have adopted some of the mannerisms of a 1970s Blaxploitation movie pimp. Geppetto, played by Landon Dufrene, seemed underdeveloped, as was the relationship between Geppetto and Pinocchio. The jump from freshly carved puppet to a runaway puppet to real boy was sudden and lacking in explanation. Okay, I know it’s a fairy tale, so logic isn’t required, but still, it seemed to me as if chunks of the story were missing. This is why I think it’s helpful to attend a children’s show with children – especially if I’m going to write about it. They weren’t bothered by, in fact didn’t even notice, any of the things I found lacking or distracting.

Over all, Miller kept the pacing swift but smooth; the time passed quickly. The cast performed with energy and enthusiasm, often making light contact with the audience, asking a question or pointing to a child or two to include them in the decision making process. I liked the opening, with the actors switching between English and Italian to set the scene – but they dropped that after the opening scene. The costumes by Marcia Miller Halley were quite well done and enhanced the fairy tale atmosphere while complementing Powers’ colorful little village set design.

Pinocchio delighted its intended audience and is largely devoid of the double entendre that so many playwrights cleverly insert into children’s plays, apparently in an attempt to keep the attention of the accompanying adults. Like most good children’s tales, there is an underlying lesson or two. In this case, the messages that are woven throughout are about telling the truth and not being afraid to grow up.

A Sensory Friendly family performance will be offered on Saturday, April 27, 2019 at 10:30 a.m. Please see the website for more details: http://va-rep.org/sensory_friendly.html

In collaboration with Virginia Voice, Virginia Rep is pleased to offer Audio Described performances, in which actions, expressions and gestures are described during gaps between dialogue throughout the performance for patrons with low vision or blindness. In addition to live audio description during performances, patrons are also invited to participate in a tactile tour before the performance. An Audio Described performance will be offered on Sunday, April 7, 2019 at 2 p.m. Please see the website for more details: https://va-rep.org/access_for_the_blind.html

Matinee performances at 2:00 p.m. every Saturday and Sunday

One thought on “PINOCCHIO: Bright and Shining Son”