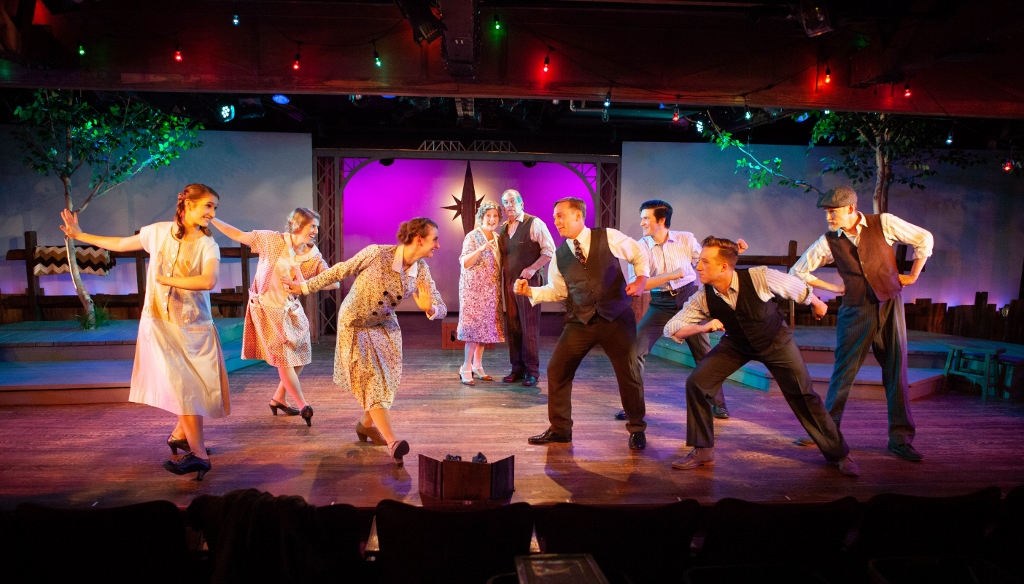 BRIGHT STAR: If You Knew My Story

Based on a true incident – the gruesome story of “The Iron Mountain Baby,” who was tossed from a moving train in 1902 – Bright Star premiered in San Diego in 2014 and had a short run on Broadway in 2016. The toe-tapping score, under the very capable musical direction of Paul Deiss and the alternately heart-warming and heart-rending story of love, loss, forgiveness, and redemption make Bright Star a perfect vehicle for the Swift Creek Mill stage.

Megan Tatum’s choreography, which ranged from a square dance to the Charleston, interjected many enjoyable moments, and Tom Width’s direction kept the cast moving along at a good pace as they moved props and repeatedly skipped from 1945-46 back to 1923-24.

Grey Garrett brought a strong voice and an amiable charm to the lead role of Alice Murphy – a woman definitely ahead of her time – and Jim Morgan brought more depth to the complementary role of Jimmy Ray Dobbs – the man who loved her – than the script seemed to call for.  I also enjoyed Jacqueline O’Connor and Ray Green as Alice’s parents, and took particular notice of Carlen Kernish as Daryl, the adult Ms. Murphy’s assistant, and of Jon Cobb as Daddy Cane.

But not even a solid cast, good acting, and tight direction could help with the patchy structure of the scenes. The program required notes almost like the synopsis that comes with a three-act ballet or an opera in a foreign language to keep up with the 26 scenes in two acts. Maura Lynch Cravey’s costumes were lovely, especially the mostly pastel and muted shirt-waist and dropped-waist dresses for the women, but they didn’t help distinguish the sometimes rapid changes between decades.

Tom Width also designed the set, a simple, rustic, multi-leveled, indoor/outdoor shell with fences rails and chairs and a table with multiple pre-set tops which the actors rearranged to indicate a home, a porch, an office, a bookshop, and various other locations. From where I sat, front row on the right, Joe Doran’s lighting unfortunately often created a glare that obscured the actors’ faces, but the smaller, decorative lights and the train – with full lighting and sound effects (was this thanks to Jason “Blue” Herbert’s technical direction?) added to the overall charm of this musical – even during moments meant to break your heart.

[On a side note: Tom Width announced that the Swift Creek Mill restaurant’s pickled watermelon rind – a buffet favorite – is now available to take home from the gift shop! Yum.]

One thought on “BRIGHT STAR: A Bluegrass Musical”