RED VELVET: The Terrors of the Earth

Raise your hand if you’ve ever heard of Ira Aldridge. Those words are a program note for the 2012 play, Red Velvet, but also the opening line of the Acts of Faith Preview on Monday, January 14. But seriously, have you ever heard of him? I had. Like many other black American performers, Ira Frederick Aldridge (1807-1867) found that he had to leave the USA in order to pursue his craft. And from what we can see from Lolita Chakrabarti’s two-act play, life wasn’t exactly a piece of cake in Europe, either. (Okay, so “red velvet” does not refer to cake but to stage curtains.)

The play opens and ends with Aldridge, touring as King Lear near the end of his career, being pursued by a pushy Polish woman journalist – whom he derisively refers to as a “skirt.” Jamar Jones stars as a larger than life Aldridge, and at times the drama of Aldridge’s life and the drama he portrays onstage overlap. The journalist, Halina, played by Rachel Dilliplane, digresses into a tirade on the unfairness of being the only woman in her office – a valid complaint, but this story is about Aldridge, and there just isn’t time to focus on her. Halina’s questions about Aldridge’s ground breaking performance as the first black actor to portray Othello at London’s Covent Garden in 1833 lead the aging and apparently ailing Aldridge to review his life – and this is the gist of Chakrabarti’s play.

Aldridge arrives in London to replace the legendary Shakespearean actor Edmund Kean who has collapsed while playing Othello. Kean’s son, Charles, played with supercilious contempt by Cole Metz, who is also a member of the company, expects to step into the role. But the entire company, with the exception of a delightfully smug young cast member, Henry, played by Stevie Rice, are shocked when Aldridge arrives. At one point, Charles throws a full-blown temper tantrum, complete with stomping and screaming. One actress, Betty Lovell, also played by Dilliplane, remarks that when she read the reviews about Aldridge’s “dark” performance, she thought they were referring to his demeanor, not his complexion.

Although it is not entirely clear, what with all the ambient sound, the flurry of accents, and the period language, England is in the midst of riots about the abolition of slavery, and members of the theater company are firmly rooted on both sides of the slavery versus anti-slavery debate. Bernard, played by John Cauthen, just wants sugar for his tea, and doesn’t care how it’s made. Echoing the headlines of recent news, Bernard advocates for “closed borders.” Some players just want to get on with the show. Some are appalled at the idea of Aldridge interacting with leading actress Ellen Tree, played by Frances Saxton. Ellen is also engaged to Charles, and soon rumors of physical abuse and sexual impropriety begin to fly.

Key to this entire experiment is theater manager Pierre Laporte, played by Eddie Webster complete with a French-ish accent. It seems Laporte and Aldridge are long-time friends, and Laporte is brave enough, and European enough, to buck conservative British tradition and shake things up a bit. Unfortunately, it isn’t enough, and there is an intense second act fight between Laporte and Aldridge that actually gets physical. “Theater,” Laporte assures us, “is a political act.”

At one point, the actors read the racially charged reviews that begin to come in after Aldridge’s first performance. Some refer to the absurdity of a black man playing Othello, the Moor, while others completely ignore Aldridge’s talent, but focus on the shape of his lips, which, the assert, prevent him from properly pronouncing the words. Watching it all from the rear is Connie, a Jamaican-born servant who quietly serves tea to the actors. Connie, played by Desirèe Dabney, could be just another stereotype – the “mammie” caricature, or the always stout black woman who takes care of everything. I was pleased when she was, briefly, given a voice in the second act, where she reminded Aldridge that people see what they want to see, but her supporting role never completely broke the stereotype.

Director James Ricks has done an excellent job corralling all this intense material into something that makes sense most of the time, but the first act seemed to get bogged down. The second act ramped up in intensity, often pulling me to the edge of my seat. This is not a story that can be told in one two-act play. David Melton kept the scenic design simple, yet effective: a chaise lounge, a desk, a few chairs, a screen that were moved between scenes. I also liked Cora Delbridge’s dresses for the women, as well as Charles’ foppish ensemble, complete with walking stick. 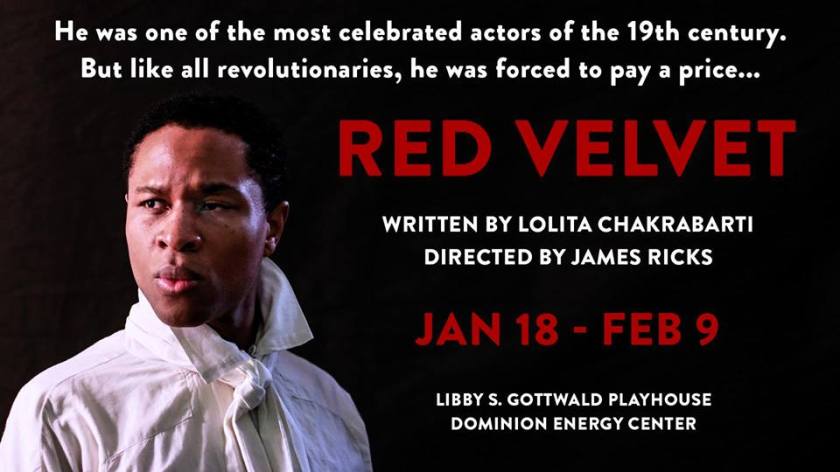 One thought on “RED VELVET: The Politics of Theater”