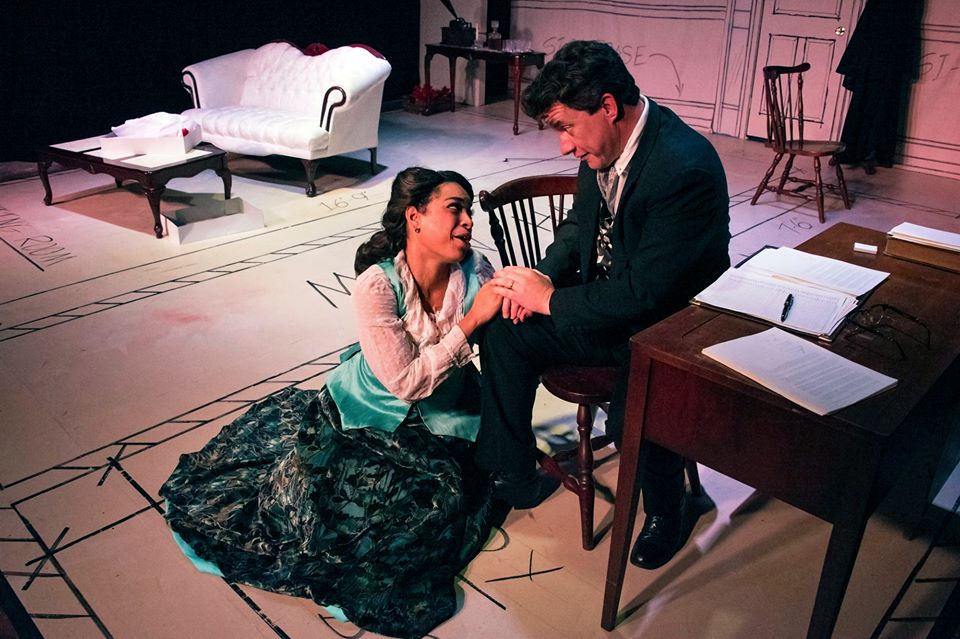 A DOLL’S HOUSE: Love and Marriage

The theme of TheatreLAB The Basement’s current season is “In Pursuit of Happiness.” Following on the heels of the season’s memorable opening show, Significant Other, is a most unlikely production – the thee-act Henrik Ibsen classic, A Doll’s House. First produced in 1879, A Doll’s House created a sensation then because of its unconventional take on marriage and the roles of husbands and wives. One hundred thirty-nine years later, the show remains on the cutting edge, due in no small part to the forcefulness of the cast and the nail-biting intensity of Josh Chenard’s direction.

In what some refer to as color-blind casting, Katrinah Carol Lewis inhabits the role of Nora Helmer, with Landon Nagel as her husband, Torvald. Lewis has tackled some emotionally challenging roles in recent years, from Lady Day at Emerson’s Bar and Grill and Twilight: Los Angeles, 1992, both at TheatreLAB, to A Raisin in the Sun and River Ditty with Virginia Rep, but this may be the most highly charged of them all. With her naturally large eyes accented by makeup, and in the intimate space of The Basement, it was easy to see every nail biting emotion, to hear every breath, to practically feel her trembling. Nagel, whose character at one point remarked how warm it was in their staged apartment, was sweating real beads of perspiration. A Doll’s House is not a play for the faint of heart; it’s hard work for the audience, too, not just for its emotional intensity, but the three acts run nearly three hours, including two intermissions. It also took awhile to adjust to the mannerisms and affectations of the main characters.

Amber Marie Martinez is calm and insightful, in contrast to Lewis, in her role as Nora’s childhood friend, Kristine Linde. Jocelyn Honoré has a supporting role as the family’s maid and nanny, Anna, but all three women are linked by the social mores of their time that require they surrender their own thoughts, feelings, and needs to those of the men in their lives or the needs of their families. Kristine entered into a loveless marriage in order to support her mother and younger siblings. Anna gave up her own daughter and went into service to others. Nora has gone from her father’s house to her husband’s house, and doesn’t even know who she is, other than a doll to be played with at the whim of first her father, and now her husband. These three women are bound together, whether they want to be or not. Their interactions are sometimes sharp, sometimes brittle, but always there is the knowing glance, the slightest turn of the head, the knowing eye toward whichever man is currently acting clueless.

Nagel is positively frightening in his ability to switch effortlessly from domineering husband to sweet-talking lover. Torvald has an unending list of pet names for Nora; literally – he keeps calling her different kinds of birds! For his role as the ill-fated employee Nils Krogstad, Axle Burtness holds his left arm close to his body and limps slightly on his left leg, nursing an unnamed handicapping affliction. Torvald’s close friend and daily visitor, Doctor Rank, played by Todd Patterson (more color-blind casting) also has an unnamed debilitating disease, but it seems his spinal affliction is due to a venereal disease inherited from his philandering father.  Young Faris Alexander Martinez was adorable as Nora and Torvald’s enthusiastic if neglected young son, Jon. (Faris did not appear for the opening night curtain call, presumably because it was past his bedtime.)

The family dynamics and levels of dysfunction in A Doll’s House may have been endemic to the 19th century, but they are all to frequent even today, which makes the play as much a horror story as a drama. Women giving up their own hopes and dreams to take care of aging parents or young siblings, women burying their own desires in order to please their husbands, women living in fear or thinking they do not deserve better, men who view women as possessions or objects, men who think women’s thoughts, feelings, intellect, contributions are worth less than those of men: all of these themes remain as prevalent in 2018 as they were in 1879. So, when Nora takes her final steps out the front door, slamming it behind her with the finality of nails in a coffin, not only is it the most dramatic exit ever in the history of theater, it is, as Chenard wrote in his director’s notes, “a celebration of. . .resilience and strength.”

Chris Raintree’s scenic design is a black and white outline or blueprint, with the names of the rooms – sitting room, playroom, main hall, study – printed on the floor, along with the room’s measurements, and a door opening that the actors mostly respect as they navigate the space. There are a few period pieces, a sofa, a desk, a child’s toy horse, and at the end of the main hall, where we, the audience sit, there appears to be a mirror, as Nora always stops, stares, and adjusts her hair and before going into her husband’s study. Ruth Hedberg’s period costumes make it clear where each character stands in the social hierarchy, and the overall look is one of a slightly shabby middle class striving.

Chenard’s direction is both gentle and shattering. Lewis’ performance is electric and the interaction between Lewis and Nagel is painful and shocking. Lewis’ side-eye when Nora makes her mental shift is epic. The end of each act is met with a blackout and gasps from the audience – both for emotional release and in recognition that one has been holding one’s breath for the last five minutes.

One thought on “A DOLL’S HOUSE: Well, Shut the Door!”