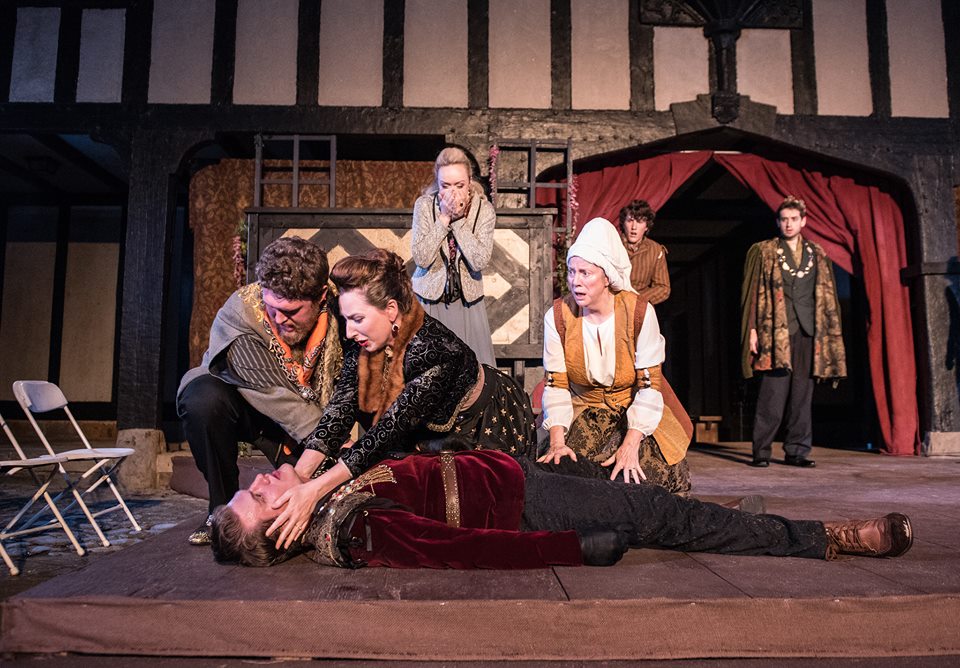 A Theater Review and Reflections by Julinda D. Lewis

Quill Theatre staged Romeo and Juliet at the Virginia Museum of Fine Arts just two months ago, in April. I thoroughly enjoyed it and did not plan to see the re-staging at Agecroft Hall. (Beautiful as it is, it’s outside, and there’s the question of weather and bugs, and all that goes with it, and besides, I’m recovering from back surgery and the seats might not be comfortable, etc., etc., etc.) But I heard several friends and colleagues speak so positively about the restaging, which is directed entirely by James Ricks, whereas the April version was conceived and started by Dr. Jan Powell, whose vision was completed by Ricks after Powell was called away due to a family emergency. So, on June 14, near the end of the run, I found myself seated comfortably on a cushion I brought with me, on a very pleasant, bug-free night – thoroughly enjoying Romeo and Juliet and appreciating the nuances Ricks brought to this remounting.

First of all, Agecroft Hall is thoroughly conducive to Shakespeare. The court and building backdrop, the garden, even the birds and bugs, provide a natural setting that requires little else to transport the audience to Verona and the world of Shakespeare. Then, given that the story and the script are the same, and most of the cast is the same, it was fascinating to watch a very different experience unfold before my eyes.

One of the most striking things was when, during the balcony scene that is probably familiar even to those who have never seen a performance of Romeo and Juliet, Juliet jumps down from the balcony to meet Romeo. I saw Liz Earnest in the role both times – Claire Wittman played Juliet opening weekend at Agecroft Hall – but I found her character to be both funnier and more empowered this time around.

Tyler Stevens, who first caught my attention and admiration as the younger son in the VirginiaRep Hanover Tavern production of Brighton Beach Memoirs in 2016, played the role of Romeo. Stevens brought a balance of passion and youthful impulsiveness that made his character endearing; we were able to see him through the eyes of Juliet.

Another major cast change was Todd Patterson in the role of Romeo’s friend Mercutio.  I absolutely loved Matt Shofner’s over-the-top performance at VMFA and was equally enamored of Patterson’s very different interpretation.  Patterson’s Mercutio seemed to be played less for comedy and more as a young man clinging to childish ways in a last-ditch effort to avoid adulthood – something we teachers and parents see all too often in real life!

Melissa Johnston Price’s Nurse and Bo Wilson’s Friar Lawrence remained stalwart figures with solid roles that anchored the action and their young mentees’ characters. Johnston Price’s scene with Juliet’s mother, Lady Capulet, seemed less drawn out while Wilson’s interactions with Romeo seemed more fatherly and his character’s actions overall seemed more like that of an elder or wiseman focused on establishing peace and reason between the families.

I was able to get a close-up look at the inspired construction of Cora Delbridge’s costumes. She seemed to be going for a blend of contemporary and traditional, often achieved by ripping open seams and patching them back together, leaving them partially open – sort of like the contemporary ripped-jeans look. After this show, I am angling to get my hands on Lady Capulet’s fitted black and silver mermaid dress. Aaron Orensky’s fight choreography is exciting and BJ Wilkinson’s lighting works with the natural lighting of dusk to create haunting scenes, especially those in the tomb and at the end.

This popular and well-known tragedy – interspersed with moments of humor – is well worth seeing, whether for the first time or again, if you saw the VMFA production. Interestingly, just as Romeo and Juliet comes to a close, on June 24, Virginia Rep will be opening the modern-day version of the young love story, West Side Story, beginning June 22 at the November Theatre.

The  20th Annual Richmond Shakespeare Festival will continue on the courtyard stage at Agecroft Hall’s sixteenth century English manor house with two more productions: The Compleat Wrks of Wllm Shkspr, Abridged June 30, 2018 at 7:30pm and As You Like It, July 5-July 29, Thursdays-Sundays at 7:30pm.

One thought on “ROMEO AND JULIET: Romance Rebooted”