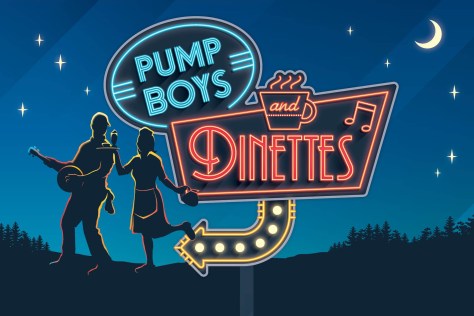 Pump Boys and Dinettes is not your ordinary musical. Created by a performance group of no less than six, who are all credited with the music, book, and lyrics, one might expect this musical to be all over the place. One would be wrong. Don’t care for country music? Doesn’t matter; this isn’t the whiny, twangy, my-woman-is-gone-and-my-dog-is-dead kind of country music. Don’t care for musicals, you say? Go back and read my first sentence.

Pump Boys and Dinettes is the most fun I’ve had in the theater in recent weeks and that’s saying a lot, since the Richmond theater community has produced some excellent theater this year. The ensemble is dynamic; the entire cast sings, acts, and plays instruments (okay, that might be stretching it a bit, but keep reading). The musical numbers are high-powered, and there are even a couple of a capella numbers that feature some rather awesome harmonizing that even my untrained ear could recognize and appreciate. Then the Dinettes pick up wooden spoons and play percussion on pots. So that’s why the pots are out front instead of back in the kitchen. . .Oh, and then there is tap-dancing – in cowboy boots!

While there isn’t really a narrative in the traditional sense, we do get to meet some of the residents of Frog Level, North Carolina who work on Highway 57 at the Pump Boys service station and the nearby or attached Double Cup diner. The Pump Boys consist of Jim (John Mervini on rhythm guitar), L.M. (Mike Cefalo on keyboard, including a brief stint on an accordion), Jackson (Michael Bamford, lead guitar) and Eddie (Sean Powell on bass and harmonica). Not much work gets done at the service station, since the Pump Boys are all playing music a lot more than pumping gas. Indeed, when a customer calls to check on the status of his Winnebago, he is told it will be ready, maybe, next week. The customer is put on hold – on the ancient phone held together with duct tape – so the Pump Boys can give him a status update singing “Taking It Slow.”

Rachel Marrs (Rhetta Cupp) and Desiree Roots Centeio (Prudie Cupp), the sisters who run the diner, seem to somehow get more work done. The Dinettes serve coffee, moon pies, and slices of pecan pie to the audience at the beginning of the show and collecting tips in Act 2. “Tips” is the title of a sassy duet in Act 2, with the money collected going to the 5th Wall Development Fund. In addition to feeding the audience with art and food, Centeio sits on gentlemen’s laps and dances with an audience member (Friday night it was my fiancé Albert Ruffin) while singing “The Best Man” and the sisters escort a female audience member onstage, so Jackson/Bamford can serenade her in “Mona,” a song about his crush on a mall cashier.

“The Fisherman’s Prayer” is a beautifully harmonized number by the Pump Boys in Act 1, which also features a heat-warming ballad, “Mamaw,” sung by Jim/Mervini. Act 1 ends with The Dinettes and L.M. donning cowboy boots and Eddie donning tap shoes for “Drinkin’ Shoes.” Highlights of Act 2 include L.M.’s “T.N.D.P.W.A.M.” which stands for The Night Dolly Parton Was Almost Mine, and the hilarious “Farmer’s Tan,” again featuring L.M. with the Dinettes. Everyone gets at least one featured number except Eddie, but he does get to do an awesome “duet” with his upright bass. While each cast members shines individually, Mervini, Marrs, and Centeio are standouts and Cefalo is a surprise when he emerges from behind his keyboard, it is the magnetism of the ensemble that makes Pump Boys and Dinettes a hit.

There are 19 musical numbers, plus a reprise of the opening “Highway 57” and a closing medley of the show’s “Greatest Hits.” Most are hard-pumping, foot-tapping, danceable numbers that keep a smile on your face from start to finish. The show runs about 100 minutes, with a fifteen-minute intermission, under the seamless direction of Richard M. Parison, Jr. with musical direction by Christian Storm Burk and choreography by Karen Getz (whose work I adored in VaRep’s Fiddler on the Roof in 2013).

I also admired Rich Mason’s scenic design – a simple but authentic looking little diner on the audience’s right, and a somewhat less detailed and extremely clean service station to the audience’s left. Most of the action takes place center to right, but there weren’t many people seated on the left side on Friday night. Michael Jarrett designed the lighting, which featured a few nicely mottled effects in Act 1, and Sue Griffin and Marcia Miller Hailey did the costumes. The Pump Girl’s waitress uniforms were adorably attractive.  Let’s not forget Amy Ariel, who assisted with the lighting, Roger Price who designed the sound, and Barry Green who designed the props – of which there are quite a few. And let’s not forget to thank 5th Wall’s Artistic Director Carol Piersol and The American Theatre’s Artistic Director Richard M. Parison for selecting this show to partner.

Pump Boys and Dinettes is beautifully showcased in the intimate space of TheatreLAB’s basement. Make it a point to find your way down the steep steps that lead to this marvelous space before they close.

One thought on “PUMP BOYS AND DINETTES: A “Pump Rock” Country Musical”