The Richmond Ballet’s large-scale production of the timeless fairy tale, The Sleeping Beauty, staged by Malcolm Burn is simply beautiful. From the classical choreography by Marius Petipa, with additions by Burn, paired with the music of Peter Ilyich Tchaikovsky to the stunning technical execution by the dancers to the elegant three-dimensional set by Michael Eagan, The Sleeping Beauty is a masterful piece of theater. The music is played live by The Richmond Symphony under the direction of Resident Conductor Erin Freeman.

The work, onstage at The Carpenter Theatre at Dominion Energy Center for one weekend only, features company members Cody Beaton as Princess Aurora, Marty Davis as Prince Florimund, Lauren Archer as The Fairy of the Lilac (Wisdom), and Mate Szentes as her Cavalier. Petite Elena Bello dances the role of Carabosse, the Wicked Fairy, with Peter Elverson as King Florestan and Ballet Master Jerri Kumery in a rare character role as his Queen. Another character role, that of The Nurse, is filled by faculty member Susan Israel Massey, and Richmond Ballet II member Khaiyom Khojaev is featured as Puss ‘n Boots.

The scale of this production involves just about every company member (Ira White, recovering from an injury, was helping out at the box office on Friday night, and Maggie Small was absent recovering from a recent injury) as well as members of Richmond Ballet II, the Richmond Ballet Trainees, and students from the School of Richmond Ballet along with students from the Ballet’s Minds in Motion outreach program. Imagine the sheer power generated by twenty or thirty dancing bodies or more sharing the same stage.

The Sleeping Beauty is Tchaikovsky’s longest ballet, running nearly 4 hours, with intermissions, when performed full length – including a prologue and three acts. The Richmond Ballet production has been pared down to two acts and runs two hours, including one intermission. If that is still too long for the youngest members of the audience, they might be kept interested by frequent appearances in the second act of characters such as Puss ‘n Boots and his paramour The White Cat (Abi Goldstein), or Little Red Riding Hood and the Wolf (Savannah George and Thel Moore, III). Even the four little boys who portrayed the Trees – Carter Bush, Oliver Gardner, Hart Isacoff, and Zachary Owen – received an ovation from one gentleman in my row, and I don’t even think he was related to either of them.

The highlight of the ballet remains the Grand Pas de Deux, performed by Cody Beaton and Marty Davis. Beaton brought beauty, grace, resilience, and a touch of humor to Princess Aurora. Davis was technically crisp, noble in demeanor, and confident as Prince Florimund (originally named Prince Désiré) – as he should be after restoring the lovely Princess to life and earning her hand in marriage after a century’s long nap due to the spell cast by Carabosse on Aurora’s 16th birthday. Beaton dances with precise abandon, flinging her torso first to one side then the other, and obvious enjoyment, now leaning forward to watch the play of her arms. The couple makes the simplest choreography, like synchronized little hops backward, look beautiful, and the audience pleasing dips, lifts, and extensions look elegant and easy.

There are far too many dancers and characters to make mention of them all, but I would be remiss not to mention the lovely Eri Nishihara – a first year member of the company, she stands out as a quick, lithe, and powerful dancer in her role as Princess Florine in Act II.  Khaiyom Khojaev brought confidence and sass to his role as Puss ‘n Boots, making the most of his featured moments with nuanced tilts of his masked head and eerily authentic feline swipes of his paws – I mean hands. The Sleeping Beauty ballet is a treat for the eyes, ears, and soul.

Elena Bello as Carabosse in The Sleeping Beauty by Petipa/Burn. Richmond Ballet 2018. All rights reserved. Photo by Sarah Ferguson 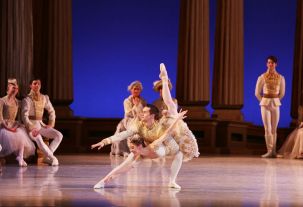 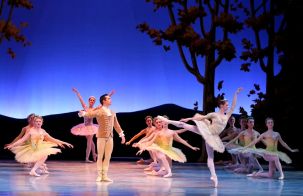 Cody Beaton as Princess Aurora in The Sleeping Beauty by Petipa/Burn. Richmond Ballet 2018. All rights reserved. Photo by Sarah Ferguson