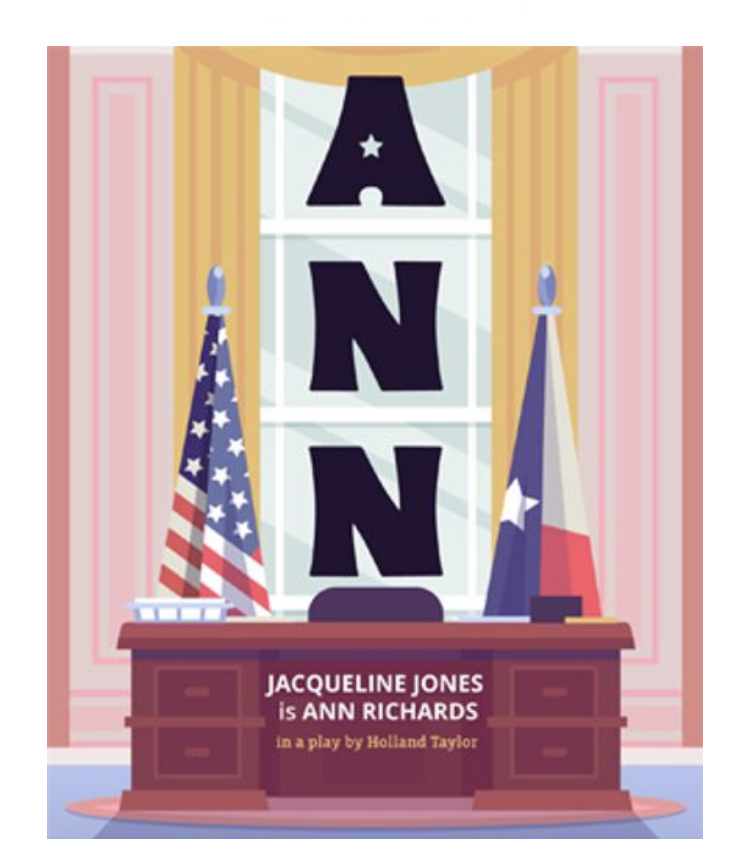 Ticket Prices: $30 suggested donation; pay what you will

Wearing a blue suit, accessorized with a double strand of pearls and bronze metallic pumps with a matching bottomless tote bag, Jacqueline Jones looks – dare I say it? – presidential as she portrays Ann Richards, the first female Democratic governor of the great state of Texas.

“I did not want my tombstone to read, ‘She kept a really clean house.’ I think I’d like them to remember me by saying, ‘She opened government to everyone.’“

And in case you were wondering, as I was, who holds the honor of being the first female governor of Texas, it was Miriam Amanda Wallace Ferguson, known as “Ma” Ferguson who served two terms as Governor of Texas, from 1925-1927 and again from 1933 to 1935. And somebody please correct me, if necessary, but my cursory research shows that “Ma” Ferguson, who basically took over after her husband was impeached, was a Democrat, so unless I’m missing something that would make Ann Richards the SECOND female Democratic governor of Texas…but I digress.

“I get a lot of cracks about my hair, mostly from men who don’t have any.“

I may or may not have heard of Ann Richards (born 1933, served as Governor 1991-1995, died of esophageal cancer in 2006), but Jones brought Richards to life in a way that made me feel as if I might have known her, and would definitely have liked her if our paths had crossed. The humor, the perfect delivery of Richard’s famous one-liners, even a naughty joke, all worked together to create a sense of intimacy that was entirely captivating.

“I suppose I owe you an apology. Well, you ain’t gonna get one. ‘Bye!”

Due to COVID-19, Ann was an ideal choice as a one-woman show, and The Firehouse Theatre restricted live performances to 2, 4, 6, or a maximum of 8 patrons. Scattered as we were, for social distancing, it felt as if Jones/Richards was speaking directly to each of us. Part of this may be due to the extensive research and care that playwright Holland Taylor put into Ann. Taylor, herself an Emmy winning actor, portrayed the legendary Governor on Broadway – as well as in Texas.

Hate the evil and love the good, and establish justice in the court. – Amos 5:15

During his customary pre-show curtain talk, Firehouse Producing Artistic Director Joel Bassin asked audience members to share their experiences and memories of Governor Richardson. Comments ranged from graceful, humorous, and forceful to “wouldn’t take no for an answer.” Jones gave us all of that. The play starts with Richards giving a commencement speech as the University of Texas, and ends with her commenting about her own funeral. In the space between, we are gifted with 100 minutes of compelling storytelling, wit, history, and inspiration.

“I have always had the feeling I could do anything and my dad told me I could. I was in college before I found out he might be wrong.”

We learn of her ground-breaking accomplishments, her commitment to service, her concern for civil rights and social justice. But we also see her as a wife, a mother, a real person with real challenges – she had to check herself into rehab for alcoholism. I came away with a picture of a woman who understood being Governor was more about others than her own personal interests, someone who worked for unity in diversity, which I found surprising for her time and her state. And to bring things into perspective, if you yearn for relevance, or like to make things connect: Ann Richards’ granddaughter, Lisa Adams, worked as an aide for Hilary Clinton during her 2016 presidential campaign and was director of communications for Senator Kamala Harris during her presidential bid.

One thing that is quite remarkable is the way Jones kept up her energy and the connection with the audience, given the limited number of people and less of feedback. But this play, with this actor, and this director – Billy Christopher Maupin, who starred in the Firehouse’s first pandemic-style contactless show the past summer – did more than just make do. They made beautiful theater.

Kudos to costumer Ruth Hedberg for the presidential suit and the Ann Richards wig. (See the photos below of Richards and Jones with the Richards wig. The photos, by the way, do not do justice to Jones, who looked radiant throughout this production.) While it was a one actor show, Erica Hughes lent her voice as Nancy Kohler, Richard’s secretary (as well as the show’s vocal coach) and Partricia Alli was the voice of the College President.

“Men are great fighters, women have the power to bring consensus.”

Performed with one ten-minute intermission, “Ann” is among the first of the live theatrical experiences to return to Richmond theater venues. Joel Bassin and the Firehouse staff have gone above and beyond to make the audience feel comfortable and safe. Masks are required of all patrons and staff. (Jones does not wear a mask on stage for her solo performance.) A staff member meets and greets you at the door with a contact-less thermometer. Everyone is assigned a seat number and even a designated bathroom. You are asked to wash your hands before taking your seat, during intermission, and before leaving. There is no lingering or fraternizing in the lobby. Unlike some other venues, The Firehouse is still providing printed programs (no need for tickets for 2, 4, 6, or 8 people) and the programs are placed in a taped off, numbered space as you check in. The bar is closed, but drinks may be pre-ordered (beer, wine, soda) and magically appear on the bar in a taped off space -identified by your number. Email confirmations are sent out with detailed instructions (it’s a lot to remember).

If you’re ready to venture outside of your quarantine quarters, this show, running though October 25, is a good place to start your journey.