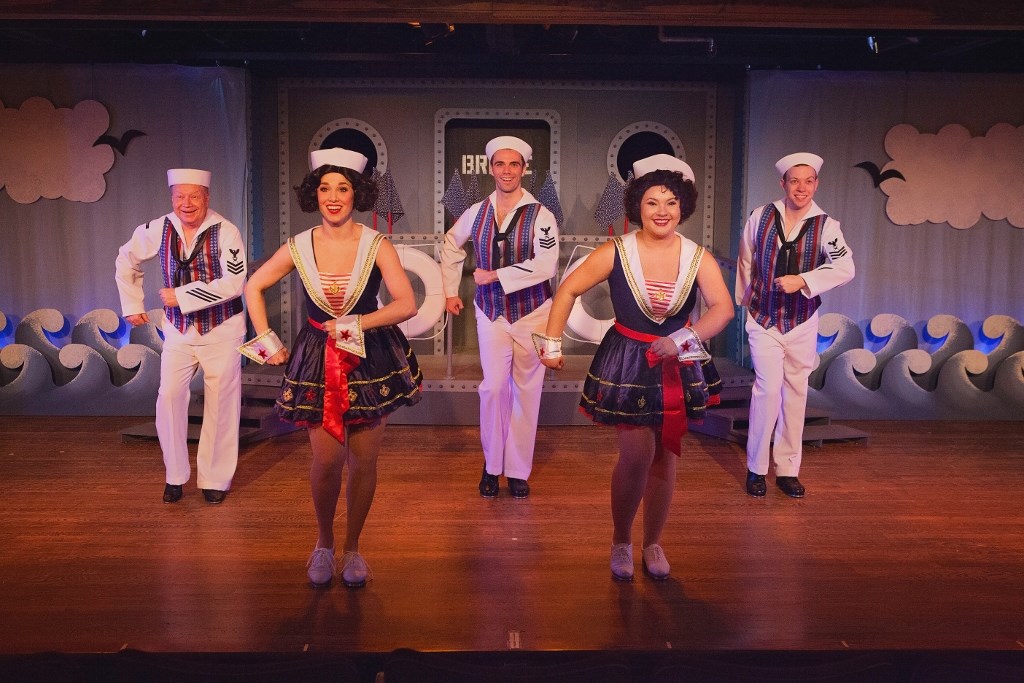 Dames at Sea, with book and lyrics by George Haimsohn and Robin Miller and music by Jim Wise first opened Off-Off-Broadway in 1966 but is perhaps best known for its 1968 production which introduced a new actress named Bernadette Peters. Twenty-six years ago, Dames at Sea was produced at Swift Creek Mill and two of the 1992 cast members – Robyn O’Neill and Steve King – apparently enjoyed it so much they have returned for another run.

A parody of the 1930s-style musical extravaganza, Dames at Sea is dated and corny and probably the most fun you’ll have in a month. The first act is set in a down-trodden Broadway theater, and Act 2 is set on the deck of a naval ship. Sweet-faced and innocent Ruby (Anne Michelle Forbes) arrives on Broadway from a small town in Utah with a suitcase containing only a pair of ruby red tap shoes and by the end of the day she has been hired as a chorus girl, meets a guy, becomes a star, and gets married. I don’t know how many hours are in this day, but if they can bottle and sell days like this, I’m placing my order right now.

Part of the tremendous charm of this two-act show is that all the impact and energy of a Busby-Berkeley movie musical, including showgirls, props, dancers creating geometric floor patterns, lots of color and movement, are all accomplished with a cast of six. In addition to Forbes, who is a 2016 TheatreVCU graduate making her Swift Creek Mill debut, there is Nicole Morris-Anastasi as Joan, a wise-cracking chorus girl who befriends Ruby; Travis West as Ruby’s sailor boyfriend Dick; and Derrick Jaques as Dick’s friend Lucky, who also happens to be Joan’s on-again, off-again boyfriend.

Returnees Steve King in the dual roles of theater entrepreneur Hennesey and the naval officer Captain Courageous and Robyn O’Neill as the diva Mona Kent together generate some of the show’s most humorous moments with a touching number called “The Beguine” that recreates their youthful romance. King alternates between sweet, shy glances and lascivious ogling of O’Neill’s bosom. O’Neill may portray a star who is losing her luster, but it’s impossible to feel sorry for her character as she also acts as the protagonist, jealously trying to hang on to the ingenue role while maintaining leading lady status – a dangerous game that wreaks havoc on Ruby and Dick’s budding romance and nearly sidelines the entire show within the show.

In the spirit of a large-scale musical, everyone sings and everyone dances. O’Neill gets to strut her stuff in the opening number and to belt her heart out in “Wall Street” and “That Mister Man of Mine.” Forbes shines in her lovelorn ballad, “Raining in My Heart,” which is more touching than her big show-saving number, “Star Tar.” On Saturday, parts of “Choo Choo Honeymoon,” one of two big numbers for Morris-Anastasi, were unintelligible from my seat on the right side of the audience. I don’t know if the same was true for those further left, but this is something that is certainly easily fixed through technology, staging, or a combination of the two.

I was quite pleased to see – and hear – that Dames at Sea is one musical that takes its dancing seriously. The work is infused with tap dancing – and while it appeared to leave O’Neill a bit winded, Forbes, Morris-Anastasi, Jaques, and West came with the energy. What they may have lacked in technique (none would fare well, hypothetically speaking, in a contest with Savion Glover) they more than made up for this potential shortcoming with big attitudes and a facility for handling props (mops, umbrellas, and more). We have choreographer Alissa Pagnotti to thank for this enthusiastic, period-style tap choreography.

Tom Width directed with his usual innate joy – every play he directs seems to be his favorite – and did the scenic design as well. There was no magic in this script, but Width did manage to work in an avalanche of falling bricks and oversized wrecking ball in Act 1, and a couple of cannons blasting confetti at the finale. Leilani Fenick is the musical director, conducting an 8-piece orchestra hidden behind the set. Zachary Townsend designed the lighting, which includes a follow-spot intentionally designed to recreate the authenticity of the period, and Maura Lynch Cravey designed the costumes. I was particularly fond of Ruby and Joan’s tap shorts. (Yes, I did mean shorts, and not shoes.) Dames at Sea is a leave-your -worries-at-the-door and just enjoy yourself kind of musical.

2 thoughts on “DAMES AT SEA: Making Waves at Swift Creek”